'There is nothing here': The future is uncertain for 70,000 in the Bahamas left homeless by Dorian 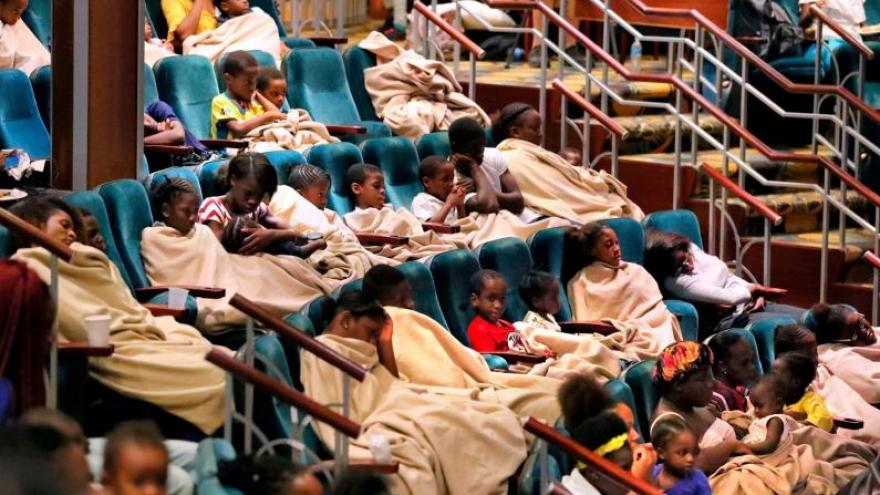 Evacuees from Freeport, Bahamas, rest onboard the Royal Caribbean's Mariner of the Seas cruise ship after it arrived in Freeport, Saturday, Sept. 7, 2019.

(CNN) -- As the Grand Celebration cruise ship sailed away from the Bahamas on a humanitarian mission carrying nearly 1,500 hurricane evacuees, Ceva Seymour looked back at the hundreds of desperate Bahamians left behind at Freeport Harbour.

"It was difficult for me to see that other people couldn't get on the ship who probably needed to be there more than me," Seymour, 56, said after arriving in Florida with more than a dozen of her cousins and grandchildren.

Seymour, her relatives and all those who stayed behind are among the 70,000 people thrust into homelessness on Grand Bahama and the Abaco Islands by the strongest hurricane ever to hit the archipelago nation of about 390,000 residents.

The death toll, now at 43, remains unknown one week after the Category 5 storm struck, but government officials warn that it will be far higher.

Dorian lingered over the islands for days with winds of about 185 mph. It crushed homes, schools, supermarkets, roads and airports across the northern end of the Bahamas. Tens of thousands of dazed and exhausted survivors were left in the ruins. The most desperate seek refuge at airport terminals and ports.

"It was really difficult getting on the boat," Seymour said. "I never thought I'd be in this situation."

The number of the displaced is staggering

Tens of thousands of people have lost homes on Abaco and Grand Bahama, according to the United Nations. A thousand tarpaulins were to be distributed to replace roofs, the International Organization for Migration said.

The number of displaced is staggering, given the population of the Bahamas, but not unusual for a major environmental disaster, according to Maria Cristina Garcia, a history professor at Cornell University. The 2010 earthquake in Haiti left 1.5 million homeless.

"These 70,000 do not include the thousands who, though not technically homeless, will live in damaged homes covered only by blue plastic tarps," she said.

"You can still find blue tarps in the (US Virgin Islands) and Puerto Rico two years after Hurricanes Irma and Maria."

Search and rescue crews with cadaver dogs ferreted through rubble on the Abaco islands. The human remains they find are put in body bags and coolers.

Marsh Harbour is the biggest town in the Abacos and one of the hardest hit. A truck delivered at least two bodies to a makeshift mortuary Saturday. The morticians told CNN the difficulty in reaching the dead was slowing their work. Dive teams were needed to recover many submerged bodies, they said.

"There are dead animals and gasoline in the water," said Elizabeth Nixon, who evacuated to Nassau but waited to be reunited with her children. "The clinic was so bad the toilet bowls were overflowing. The sewers are coming up... Bodies are in the harbor. It seems like we're in a movie."

Nearby, in the town of Mudd, the devastation is so complete -- homes entirely smashed -- that it is difficult for residents to locate where their homes once stood.

Local authorities believe there are people buried under the rubble, but they have no way of knowing how many or when they will be able to get to them.

In Marsh Harbour, US Coast Guard personnel and Miami paramedics this weekend discovered the body of a woman buried in layers of debris in a scene likely be repeat itself in the coming days and weeks.

"You could literally smell the death in the air as the water dries up and the sun comes out," survivor Sharon Rolle said. Her home -- her entire neighborhood -- in the Abacos, was destroyed, she said.

"There is nothing here," she said. "We're actually sitting in a car now trying to figure out what's the next step."

'I don't see the authorities around'

The powerful storm seems to have overwhelmed authorities in the small island nation, leaving most early relief efforts in the hands of Bahamian nonprofits and US relief agencies.

"I don't feel safe," Rolle said. "I don't see the authorities around. They say that they're here but I honestly don't see them... There's a lot of chaos. Abaco is demolished. It's finished. We need help."

The US Agency for International Development this weekend announced an additional $1 million in humanitarian assistance, bringing the US agency's funding to $2.8 million for food, shelter, water containers and other items. Its partner, the Bahamas Red Cross, will also distribute supplies including portable stoves and towels. USAID also has teams of disaster response experts on the ground.

The UN provided another $1 million.

"This is already a humanitarian crisis; it need not turn into a refugee crisis if the displaced survivors can find shelter near their original communities or in less affected parts of the Bahamas," said Anne Richard, who served as Assistant Secretary of State for Population, Refugees and Migration in the Obama Administration.

Florida Sens. Marco Rubio and Rick Scott have asked the Trump administration to waive visa requirements for displaced Bahamian citizens with close relatives in the US.

Environmental migrants are not covered by the Geneva Convention on the status of refugees, which protects people fleeing persecution, war or violence.

Jacqueline Bhabha, a professor at the Harvard School of Public Health, said there are strong humanitarian reasons for temporarily admitting displaced Bahamians to the US as was done after the Haiti earthquake in 2010 and Hurricane Mitch in Central America in 1998.

Bahamians continue to gather at sweltering airports and wharfs for flights or ferries to the nation's capital. Others await Florida-bound cruise ships.

Most of the evacuees who arrived in Palm Beach by cruise ship were picked up by family members or were provided transportation to reach loved ones in the area. But 50 will be housed at a shelter, Palm Beach County officials said.

Of the 1,435 evacuees aboard the cruise ship, 539 are US citizens or lawful permanent residents, US Customs and Border Protection said. The others included 857 Bahamians and 39 evacuees of other nationalities.

"The first place they turn to is their own social networks," said Jeremy Konyndyk, who was director of USAID's Office of US Foreign Disaster Assistance in the Obama administration. "Do they have family members elsewhere? Do they have friends who can take them in temporarily?"

Seymour, who arrived in Florida on the humanitarian cruise with 16 cousins and grandchildren, will stay with a sister is Port St. Lucie for now.

"I love the Bahamas," she said. "I love my home. I'm hoping they can get things up and running. But I know it's going to take a while because we're basically starting from scratch."

More Americans went to the library last year than to the movies, a new Gallup poll finds