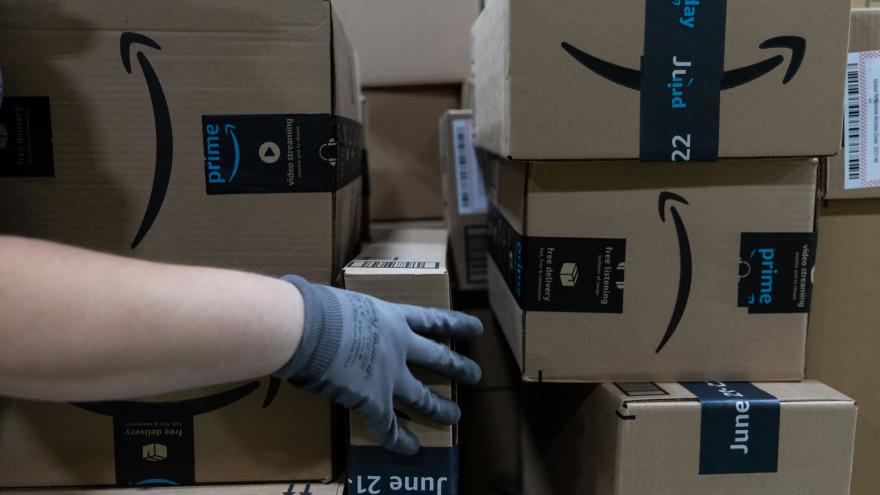 (CNN) -- Millions of women in more than 25 states face an abortion ban if the Supreme Court overturns Roe v. Wade, the landmark 1973 decision that legalized the procedure nationwide. For many of those women, employers' benefit packages may be the only way they can soon afford a legal abortion.

Amazon became the latest corporation to cover employees' travel costs to seek abortion care. The company told staff it would pay up to $4,000 in travel expenses annually for medical treatments including abortions, according to a message seen by Reuters. An Amazon spokesperson confirmed the nature of the Reuters report to CNN Business.

CNN has not independently confirmed the Politico report, and a Supreme Court spokesperson declined to comment.

If Roe is overturned, legislatures in 26 states have pending laws indicating that they intend to ban abortions, according to the Guttmacher Institute, a research organization that supports abortion rights. That could leave many women in need of abortion services hundreds or thousands of miles away from access to the procedure — unaffordable for many.

Corporate America is increasingly being drawn from the political sidelines on the abortion issue in response to pressure from investors, customers and employees. Companies are also struggling to attract and retain talent and worry about the impact these states' anti-abortion laws could have on their workers.

Executives are also learning how difficult it can be to craft a political message without angering one side or the other. Disney, notably, is grappling with the political fallout of coming out against Florida's so-called Don't Say Gay law. CEO Bob Chapek initially failed to condemn the legislation before backtracking and apologizing to staff and fans who were outraged by the legislation. After Disney publicly opposed the law and vowed to help repeal it, lawmakers in the state passed legislation to dissolve the company's longstanding status as a self-governing special district.

Last year, as several states pushed legislation that would make it harder for some citizens to vote, hundreds of leading executives from companies including Amazon, Google, BlackRock and Starbucks signed a statement opposing the bills.

Here are some of the most prominent companies offering expanded assistance to staff in states curtailing abortion care.

The nation's second-largest private employer said it would cover up to $4,000 per year in travel expenses for staff members seeking non-life-threatening medical care, including abortions, if care isn't available within 100 miles of where they live.

The electric vehicle maker said in its 2021 impact report that it will help provide travel and lodging "for those who may need to seek healthcare services that are unavailable in their home state" as part of its expanded Safety Net program and health insurance offering. Tesla's headquarters moved to Texas in 2021, a state that has banned abortions after six weeks.

Citigroup in March became one of the largest US companies to commit to covering employees' travel costs if they need to leave their state to seek an abortion.

"In response to changes in reproductive healthcare laws in certain states in the US, beginning in 2022 we provide travel benefits to facilitate access to adequate resources," Citi said in a letter to shareholders as part of its annual proxy statement.

The dating app company, which is based in Austin, Texas, in September created a fund "supporting the reproductive rights of women and people across the gender spectrum who seek abortions in Texas."

"Bumble is women-founded and women-led, and from day one we've stood up for the most vulnerable. We'll keep fighting against regressive laws like #SB8," the company said on Twitter the week the legislation, which amounts to a near total ban on abortions in the state, went into effect last fall.

Relief funds will go to organizations that support women's reproductive rights, including Fund Texas Choice, according to Bumble.

"Efforts to further restrict or criminalize that access would have far-reaching consequences for the American workforce," the company told CNN Business in a statement. "Given what is at stake, business leaders need to make their voices heard and act to protect the health and well-being of our employees. That means protecting reproductive rights."

Under Levi's benefits plan, employees can be reimbursed for travel expenses for services not available in their home state, including abortion. Part-time staff and others who aren't included in the company's benefits plan are also eligible for reimbursement, it said.

The ride-sharing rivals each announced in September that they would create legal defense funds to protect any drivers who might be sued under the Texas law for driving a person who receives an abortion.

The law's wording leaves open the possibility that a driver could be sued, possibly even if they didn't know an abortion was happening, according to Elizabeth Sepper, a law professor at the University of Texas at Austin.

Lyft also said it would donate $1 million to Planned Parenthood "to ensure that transportation is never a barrier to healthcare access."

The Dallas-based company that owns Match.com and several dating apps including Tinder, OkCupid and Hinge, also announced in September a fund to ensure its employees and their dependents would be able to seek reproductive care outside of Texas.

"The company generally does not take political stands unless it is relevant to our business," said CEO Shar Dubey in a memo at the time. "But in this instance, I personally, as a woman in Texas, could not keep silent."

Salesforce announced in September that it would assist its employees and their families if they want to leave Texas after the state passed the nation's most restrictive abortion law.

The cloud computing company told its 56,000 employees that they "stand with all of our women at Salesforce and everywhere."

Salesforce CEO Marc Benioff tweeted at the time: "Ohana if you want to move we'll help you exit TX. Your choice." ("Ohana" is the Hawaiian word for "family.")

A representative for the San Francisco-based company said its employee health insurance already covers abortion care, but starting in May, Yelp will cover travel expenses for any US employees and their dependents who need to travel out of state to access abortion care.

The benefit extends to staff and dependents affected by any current or future restrictions on reproductive rights.

As a remote-first company with a distributed workforce, "it's a priority for us to offer our employees consistent healthcare coverage, regardless of where they live," a representative said.

Starbucks' healthcare plan is offering reimbursement for travel for abortion or gender-affirming procedures when those are not available within 100 miles of an employee's home. Dependents who use Starbucks' medical plan are also eligible for these benefits.

"Regardless of what the Supreme Court ends up deciding, we will always ensure our partners have access to quality healthcare," wrote Sara Kelly, acting EVP of Partner Resources at the company, in a May 16 letter.

Kelly added that the company's benefits team is working on details of the new benefit, including timing.