These states will have abortion on the ballot in November 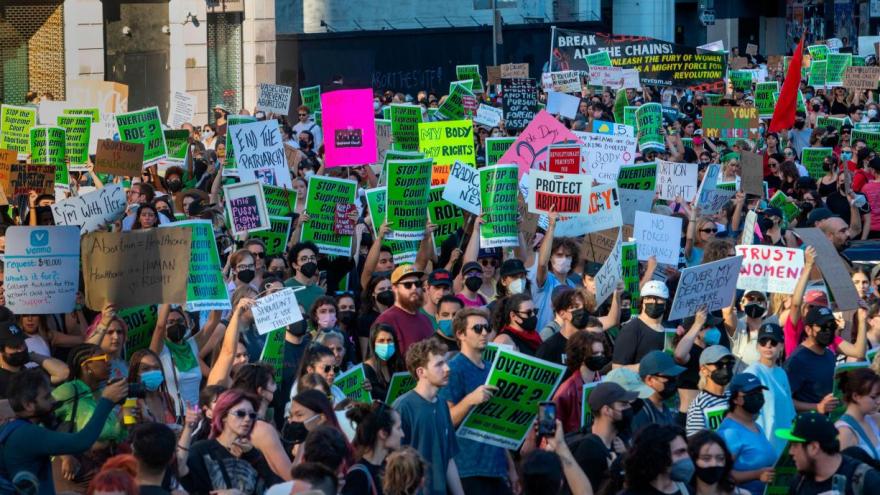 (CNN) -- Voters in a small number of states will decide in November how those states should handle the abortion issue. Abortion rights have taken on an increased significance and become a top focus in the midterm elections after the US Supreme Court's ruling this summer that there was no longer a federal constitutional right to the procedure.

In its August primary, Kansas was the first state in the nation to let voters weigh in on abortion since the high court overturned Roe v. Wade, and Kansans overwhelmingly chose to reject a state constitutional amendment that would have given state lawmakers the green light to help enact more restrictive abortion laws.

Four other states -- California, Kentucky, Montana and Vermont -- will consider ballot measures in November that seek to either restrict abortion or enshrine abortion rights. A proposed initiative in a fifth state, Michigan, is currently caught up in a dispute over making the fall ballot.

Proposition 1 asks voters whether to enshrine abortion rights in the state constitution.

A "no" vote would keep the state constitution as is -- but abortion rights would remain protected under state law, according to the California Legislative Analyst's Office.

Currently, the state constitution guarantees a right to privacy, which the California Supreme Court has ruled includes the right to have an abortion.

In May, following the leak of the US Supreme Court's draft opinion, California Democratic leaders Gov. Gavin Newsom, state Senate President Pro Tempore Toni Atkins and state Assembly Speaker Anthony Rendon said in a statement that they would propose an amendment "so that there is no doubt as to the right to abortion in this state."

The Democratic-controlled state legislature in June approved putting the amendment on the November ballot.

"Proposition 1 ensures that no matter what the future legislature looks like, what the future governor looks like, that people in California have a constitutional protection that explicitly ensures the state won't interfere with their right to reproductive freedom," Jodi Hicks, the head of Planned Parenthood Affiliates of California and co-chair of the Yes on Prop 1 campaign, told CNN.

The California Family Council said the proposed amendment is an "extreme and costly proposal that does nothing to advance women's health." And the California Catholic Conference, which opposes Proposition 1, called it a "misleading ballot measure that allows unlimited late-term abortions -- for any reason, at any time, even moments before birth, paid for by tax dollars."

The Yes on Prop 1 campaign said the proposal would not change "existing state constitutional protections and law, which provide for the right to choose an abortion prior to viability or to protect the pregnant person's life or health."

If adopted, the measure would go into effect the fifth day after the vote is certified.

Amendment 2 in Kentucky, which was put on the ballot by the GOP-led legislature, seeks to amend the Kentucky Constitution to state that it does not "secure or protect a right" to abortion or the funding of abortion.

The ballot question will read: "Are you in favor of amending the Constitution of Kentucky by creating a new Section of the Constitution to be numbered Section 26A to state as follows: To protect human life, nothing in this Constitution shall be construed to secure or protect a right to abortion or require the funding of abortion?"

Kentucky's "trigger law," which bans most abortions at all stages of pregnancy, and a law banning abortion after roughly six weeks of pregnancy have been allowed to be enforced temporarily, while a lawsuit challenging the laws continues.

Kentucky Right to Life executive director Addia Wuchner, who chairs the Yes for Life Alliance, which supports the amendment, said voting "yes" would "ensure there's no false interpretation of the constitution."

Without the amendment, "instead of the lawmakers who duly reflect the people's will, we would end up with the abortion industry taking each law back into court," Wuchner said.

Tamarra Wieder, the Kentucky state director for Planned Parenthood Alliance Advocates, said passing the amendment would "open the door to more attacks on abortion access," but rejecting it would allow abortion rights advocates to "continue to fight back" against the six-week ban and the trigger ban.

If adopted, the amendment would go into effect immediately once the results of the election are certified by the State Board of Elections.

Montana has a legislative referendum on the ballot that asks voters whether to adopt the "Born-Alive Infant Protection Act," which would impose criminal penalties on health care providers who do not act to preserve the life of infants born during the course of an abortion.

LR-131, if adopted, would provide that an infant "born alive" -- defined as an infant "at any stage of development" who breathes, has a beating heart or definite movement of voluntary muscles after expulsion or extraction -- be treated as a legal person entitled to medical treatment.

A health care provider who violates such a law would be guilty of a felony and could face up to 20 years in state prison and/or a fine of up to $50,000. The law would also mandate that health care providers and clinics report "a failure to comply with the requirements" to law enforcement.

A "yes" vote on the referendum would see the act adopted, while a "no" would reject it.

Montana currently prohibits abortions past viability -- "the ability of a fetus to live outside the mother's womb" -- except to save the life or health of the woman.

The bill that put the referendum on the ballot was passed by the state's Republican-led legislature last year.

Proponents of the measure say such a law is necessary to protect infants born during an abortion attempt, while opponents say the bill isn't needed because there are laws in place that require care to be given.

Hillary-Anne Crosby, the campaign coordinator and communications lead for Compassion for Montana Families, said LR-131 "zeroes in on families that are having complications in the labor and delivery room, such as lethal fetal abnormalities."

"It's not uncommon for families to make the decision to induce labor so that they can hold their infant for a few minutes, maybe have family come in and be able to meet their new family member for the few moments that they are alive, and LR-131 throws a wrench in that being a viable option to them without the health care workers facing a felony," she told CNN.

If the referendum is approved, the law would go into effect January 1, 2023.

Vermont voters will consider whether to approve a state constitutional amendment that abortion rights supporters say would protect "every person's right to make their own reproductive decisions," including about pregnancies, abortion and birth control.

If the proposal is adopted, the Vermont Constitution would be amended to read: "That an individual's right to personal reproductive autonomy is central to the liberty and dignity to determine one's own life course and shall not be denied or infringed unless justified by a compelling State interest achieved by the least restrictive means."

A "yes" vote would amend the state constitution, while a "no" vote would keep the status quo in Vermont, where abortion is legal at all stages of pregnancy.

The proposed amendment was first brought by the Vermont Legislature in 2019.

"It would mean that abortion access has been codified in the state constitution, and really the most important part of that is that it's protected long-term, and it means that access is going to be there, no matter what our politicians do," Sam Donnelly, the campaign manager for the coalition, told CNN.

Both supporters and opponents of Article 22 say that if the amendment is adopted, Vermont lawmakers would be unable to pass any limitations or regulations on abortion in the future because it would then be deemed unconstitutional.

Mary Beerworth, the executive director of the Vermont Right to Life Committee, which opposes the amendment, said the proposal goes "way, way further" than codifying abortion rights into the state constitution.

"It will be about a vast range of anything that pertains to your personal reproductive autonomy, from surrogacy, three-parent embryo, designer babies, minors possibly accessing the hormone blockers for transgender surgery without their parents' knowledge or consent," she told CNN. "It's opening a whole new world here if it passes."

If voters reject the amendment in November, Matthew Strong of Vermonters for Good Government, said that while abortion would remain legal through all nine months with almost no limitations, it "would be mostly a repudiation of how extreme this approach is."

Should a majority of voters approve the amendment, its effective date would be Election Day, November 8.

Michigan abortion rights advocates are hoping that a constitutional amendment, which would enshrine abortion rights and ultimately block a decades-old abortion ban from taking effect, can make it on to the November ballot.

The Board of State Canvassers, which is made up of two Republicans and two Democrats, deadlocked 2-2 this week on approving the Reproductive Freedom for All ballot measure.

The group behind the ballot initiative filed a complaint asking the Michigan Supreme Court for judicial intervention to direct the board and Michigan secretary of state to place the issue on the ballot.

The campaign had submitted well over the required number of petition signatures to the Michigan secretary of state's office to qualify for the November ballot. And the Michigan Bureau of Elections in an August 25 staff report recommended that the board approve certification of the petition.

The deadline to finalize the November ballot is September 9.

The constitutional amendment would establish an "individual right to reproductive freedom, including right to make and carry out all decisions about pregnancy, such as prenatal care, childbirth, postpartum care, contraception, sterilization, abortion, miscarriage management, and infertility," according to its 100-word summary.

The amendment would allow the state to regulate abortion after fetal viability, except if needed to protect a patient's life or physical or mental health. It would also bar the state from prosecuting an individual for having an abortion or miscarriage or from prosecuting someone who assists a pregnant person in "exercising rights established by this amendment."