This disgusting 'house from hell' is listed for $600,000 ... and getting multiple all-cash offers 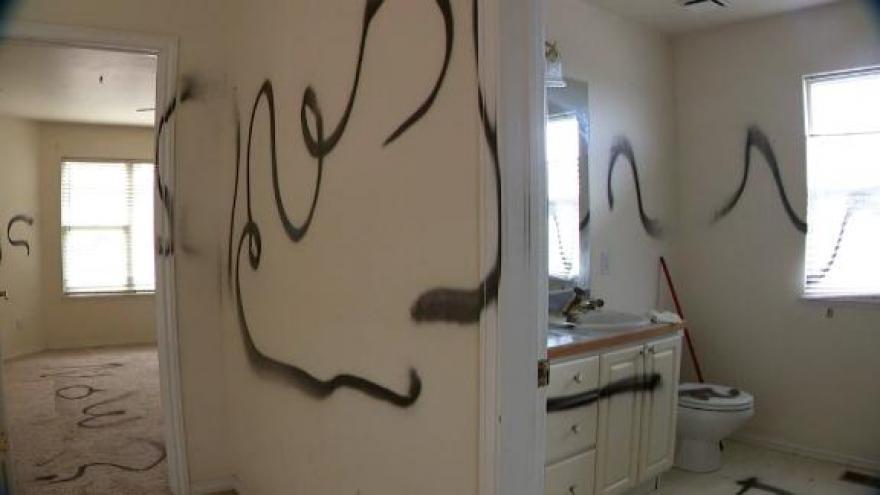 (CNN) -- If there were ever a time to sell a house of horrors, the time is now.

In this wild market, in which record low inventory and soaring demand is pushing home prices ever higher, you might expect that any old thing you put on the market would sell. Mimi Foster, a real estate agent with Falcon Property Company in Colorado Springs, Colorado, decided to put one home to the test.

She listed a five-bedroom home in the Broadmoor Bluffs Estates neighborhood for $590,000. That may sound like a steal, but buyer beware.

While the house appears fine from the outside, and is situated among homes that typically sell for $750,000 to $800,000, what awaits on the other side of the front door is vandalism, destruction, animal remains, years of neglect, and... a pretty intense odor.

"Honestly, you can feel the smell," Foster said.

But Foster didn't hold back in her description of the house when she listed it on Tuesday. Describing the home as "every landlord's nightmare," Foster wrote: "If you dream of owning your own little slice of hell and turning it into a piece of heaven, then look no further!"

"Come feast your senses, DO NOT GO ON BACK DECK. DO NOT OPEN FREEZER IN BASEMENT," she writes in the Redfin listing, which has been viewed more than half a million times.

Reminiscent of a dog adoption posting for a "13 pound rage machine" that went viral at a time when everyone wanted to adopt a puppy, this home tests just how far buyers are willing to go.

The home, which according to Foster is owned by an ailing seller who lives out of state, was rented to a tenant who lived there for a decade. It was managed for some time by a property management company, she said. When the tenant was evicted in the fall of 2019 for not paying rent, she was allowed to return to collect some of her possessions, according to Foster, but instead trashed the place.

Black spray paint covers every fixture, floor covering and surface, said Foster. Even more daunting, Foster said: the freezer in the basement that's full of meat and hasn't had electricity for over a year.

By February 2020, said Foster, the seller was facing foreclosure on the home because she was no longer able to pay the mortgage. But once the pandemic hit, a national ban on foreclosures prevented that. The homeowner tried to work with her insurance company to repair the home in order to sell it, but the process was slow and not hugely successful, said Foster.

Meanwhile, as the end of the foreclosure protection fast approached, the local market was on fire.

"If there was ever a time that we could throw something like this at the market and see if it would stick, it is now," Foster told her seller.

They decided on the price by determining the amount of money that would make the owner whole, including covering the first mortgage, liens on the property, title, commissions, closing costs and back taxes.

But, Foster said, she's only accepting offers from buyers who visited the property -- because of the smell.

"I'm not allowing sight-unseen offers," she said. When an agent called to let her know she was sending over an offer from a Denver-based investor for $625,000, Foster said she told her: "I'm sorry. You have to come and smell it first."