'This is not a virus to fool around with,' an expert says, as the return-to-classroom debate rages on 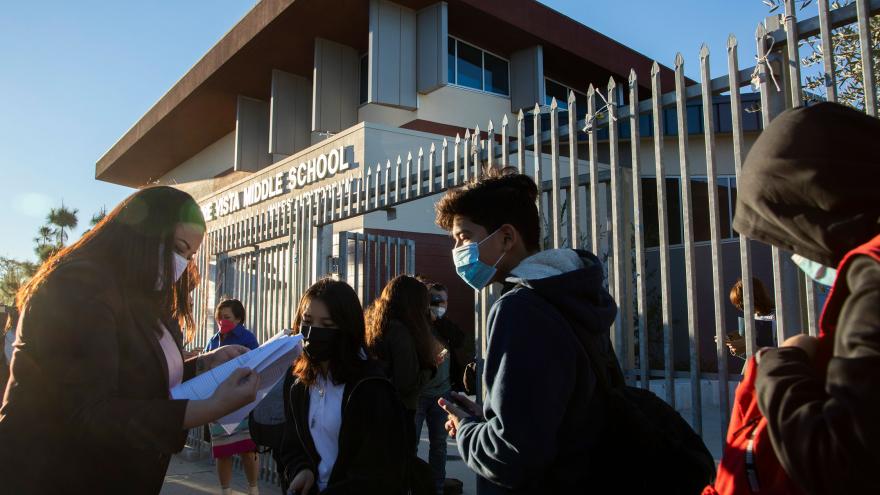 (CNN) -- As the Omicron variant spreads nationwide, leaving many people ill and forced to quarantine, educators and families are weighing the risks of allowing children to resume in-person classes.

The unprecedented surge has caused widespread staffing shortages and left more than 145,000 people in the US hospitalized with Covid-19 as of Tuesday, according to the Department of Health and Human Services -- a record number for the pandemic.

Amid the disruption, which has impacted the return of classes following the holiday break, those who work in education services have hotly debated whether in-person learning is currently feasible.

Health experts are also urging more vaccination, with only 17% of children ages 5-11 and 54% of ages 12-17 immunized so far, according to the US Centers for Disease Control and Prevention.

One expert has told CNN that people need to stop thinking that the virus can't harm children, because evidence to the contrary is mounting, while another said it's safe enough to send kids to school.

The first, Dr. Paul Offit, director of the Vaccine Education Center at Children's Hospital of Philadelphia, told CNN's Jake Tapper on Tuesday that children are being infected at a much higher rate than in 2020.

"Of the children who have been hospitalized or go to the intensive care unit or die, about a third of them have no comorbidities. Therefore, it can occur in anyone," Offit said.

"This is not a virus to fool around with. This is not influenza or parainfluenza or other typical respiratory viruses. This virus can cause you to make an immune response to your own blood vessels, which means that you can have heart disease, brain disease, kidney disease, lung disease as well as liver disease," he said.

The second expert, Joseph Allen, director of the Healthy Buildings Program at the Harvard T.H. Chan School of Public Health, told CNN's Erin Burnett on Tuesday that data shows risks to children are very low, and it's now time to talk about easing measures such as mandatory masking.

Experts including Allen have said in-person learning should move forward, citing the eligibility of K-12 students for vaccines and that adult teachers and staff have had plenty of time to get inoculated and boosted.

"New data out of New York state during the peak of the Omicron surge shows that child hospitalization rates are on the order of 1 in 100,000 if you are unvaccinated. If you are vaccinated, a child's risk is on the order of 2 to 3 per million," Allen said.

"We are coming up on two years of disrupted school, kids in masks, to think there is no harm there or no loss in socialization, no impact, I think is incorrect," he said. "The risk to kids is low and adults have had time to protect themselves with the vaccine."

For the nation as a whole, pediatric Covid-19 hospitalizations recently hit a pandemic high -- at 5,018 children on Saturday, well beyond the peak of a Delta-variant-driven wave, which was 2,544 on September 10, according to HHS.

As some schools return to class, others head home

As the debate continues over how schools can better mitigate the Omicron spread, some educators are taking matters into their own hands.

A group of teachers in Louisiana are planning a "sick-out" Wednesday to protest Covid-19 protocols and severe staff shortages, demanding virtual learning return in their district and for school officials to extend isolation times for those infected from five days to 10 days.

"We are asking that our teachers take off tomorrow and stand in solidarity showing that we care about our students, and we're not going to allow them to be put in jeopardy," said Valencea Johnson, president of the East Baton Rouge Parish branch of the Louisiana Association of Educators.

"Entire departments are out, buses and classrooms are being combined, ancillary staff, teachers, office staff, and other school employees are covering classes to keep the school afloat," she said. "We cannot continue to do this. Our staff is experiencing burnout and our students are not getting the education they need and deserve."

CNN has reached out to the superintendent of the district for response.

Several of the nation's largest school districts are returning to in-person learning while others are shifting to remote.

Districts in Los Angeles, Chicago and Atlanta moved forward with returns to classrooms this week. Students at Chicago Public Schools will arrive to class Wednesday after a battle between the school system and the teachers' union canceled classes for days.

Other districts, such as Cincinnati, Santa Fe and Las Vegas -- where the Clark County school district is the fourth largest in the country -- are temporarily moving back to remote learning as they deal with teacher absences.

'Get the highest-quality mask that you can tolerate'

Americans concerned about the best way to protect themselves and their loved ones should "get the highest-quality mask that you can tolerate and that's available to you," Dr. Anthony Fauci, director of the National Institute of Allergy and Infectious Diseases, told CNN's Anderson Cooper on Tuesday.

"If you can tolerate an N95, do it. If you want to get a KN95, fine. And what the CDC has said -- and it gets misinterpreted -- but they're saying, wearing any mask is better than no mask at all," Fauci said. "But there is a gradation of capability of preventing you from getting infected and from you transmitting it to someone else. So we should be wearing the best possible masks that we can get. That's a fact."

In Chicago, the department of public health announced the distribution of 1.9 million KN95 masks this week.

More than 100 community-based organizations including churches and libraries are helping to distribute the masks, an upgrade from many of the cloth masks being used, said the Commissioner of the Chicago Department of Public Health Dr. Allison Arwady.

"We know a lot of people, frankly even a 50 cents or $1 mask is just one extra cost at a time that is difficult," Arwady said.