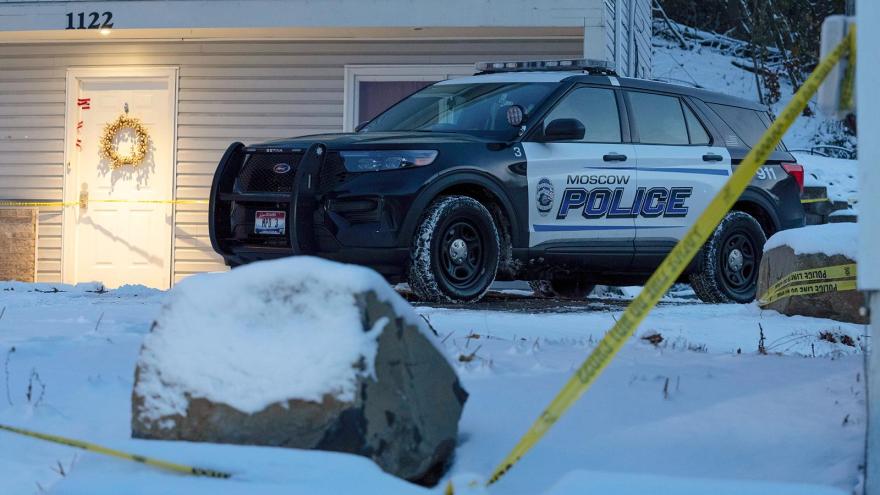 It took investigators nearly two months to arrest and name Bryan Kohberger as a suspect in the stabbing deaths of four University of Idaho students at an off-campus house in Moscow on November 13.

During the extensive investigation, authorities believed the killer had fled the scene possessing evidence that could potentially tie him to the killings -- helping them narrow down some key details to pursue.

The residence "contained a significant amount of blood from the victims including spatter and castoff (blood stain pattern resulting from blood drops released from an object due to its motion)," according to a probable cause document seeking a search warrant for the suspect's home and office.

The document -- with investigation information attributed to a statement from Moscow police Sgt. Dustin Blaker -- highlights that evidence from a dog found at the house unharmed as well as blood, skin cells or hair from the victims could have transferred onto the killer's clothes, shoes or body.

"It is likely that some trace evidence was transferred to areas in his apartment through contact with the items worn during the attack," the statement says. "One likely location for the clothes/mask/shoes that he was wearing during the attack would be his residence."

The unsealed search warrant is part of a 49-page document made public Wednesday by Whitman County Court in Washington state, detailing various investigative aspects of the case that has garnered national attention and unsettled the small college town of Moscow.

The search warrant, served December 30, allowed authorities to retrieve multiple pieces of evidence -- including DNA -- from Kohberger's apartment in Pullman, Washington, about 10 miles from Moscow.

Police seized about a dozen hair strands, one hair possibly belonging to an animal, cuttings from a pillow of reddish-brown stain and part of a mattress cover with stains, according to a court document.

Other items recovered from the home include a nitrate-type black glove, store receipts and a Dickies tag, dust from a vacuum, a Fire TV stick and a computer tower, the document shows.

The court documents made public Wednesday did not mention any potential items taken from the suspect's office at Washington State University, where Kohberger was studying criminology before he was arrested at his family's home in Pennsylvania on December 30.

It is not yet clear if anything was retrieved, or whether information surrounding the execution of that search warrant is still under seal.

Kohberger, 28, has been charged with four counts of first-degree murder in the killings of students Kaylee Goncalves, 21; Madison Mogen, 21; Xana Kernodle, 20; and Ethan Chapin, 20. He has not entered a plea.

A probable cause hearing in the case is set to begin June 26, a judge ruled last week, after Kohberger waived his right to a speedy hearing. He is currently being held without bail in the Latah County jail in Idaho.

The unsealing of court documents Wednesday came nearly two weeks after Idaho officials publicly released a probable cause affidavit in the case against Kohberger, providing a first glimpse at how they narrowed down their search.

In December, authorities asked the public for information about a white Hyundai Elantra they believed was in the "immediate area" of the crime scenes around the time of the killings.

As tips from the public poured in, investigators traced ownership of the Elantra back to Kohberger, according to two law enforcement sources briefed on the investigation.

Following the killings, Kohberger allegedly traveled to Pennsylvania from Washington to spend the holidays with his family. From there, Pennsylvania law enforcement recovered trash from the Kohberger family residence and sent the items to an Idaho lab to test for forensic evidence, according to court documents.

The following day, "the Idaho State Lab reported that a DNA profile obtained from the trash" matched a tan leather knife sheath found "laying on the bed" of one of the victims, the court documents show.

Kohberger's phone was also near the victims' residence at least 12 times between last June and his arrest, according to court documents.