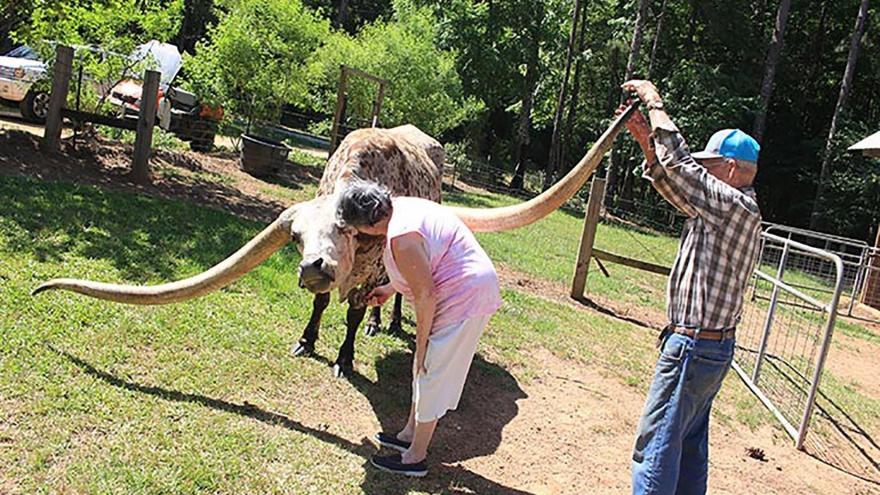 Poncho enjoys a brush while Jeral Pope keeps a check on his horns.

(CNN) -- A Texas longhorn from Alabama has broken the Guinness World Record for longest horns, measuring nearly 11 feet from tip to tip.

The 7-year-old steer, named Poncho Via, had his record breaking measurement -- 10 feet, 7.4 inches long -- confirmed on May 8 in his hometown of Goodwater, Alabama, according to a news release from Guinness World Records.

The former record holder, a Texas longhorn named Sato, had a horn spread of 10 feet, 6.3 inches, when measured in September, according to Guinness World Records.

The Pope family, who has had Poncho since he was six months old, realized they could have a record-breaker on their hands when they noticed a few years ago that his horns were growing out and not curving up like other longhorns, the release said.

Poncho has become quite popular in the community, his owner Jeral Pope told Guinness.

"All my neighbors (around) here, any time they have company, they come over to see the longhorn," Pope said in the news release. "He's just a big, gentle character. Everyone brings (food) with them -- he likes apples, carrots and marshmallows."

But Poncho has had his moments. One of his caretakers says he was knocked into a pond once when Poncho got spooked by something, according to the Guinness news release.

"He pulled a water bottle right out my pocket with his tongue. He's there playing with the bottle and I reached and scratched him for a bit," said George Jones, a family member who helps out with Poncho on the ranch.

"That went on for a little while and I guess a horsefly got on him or something (because), all of a sudden, he turned that head and I went airborne into the pond. He just knocked me completely off my feet into the water," Jones said.

The family is just happy that Poncho continues to bring their friends and family joy and keep people coming over.