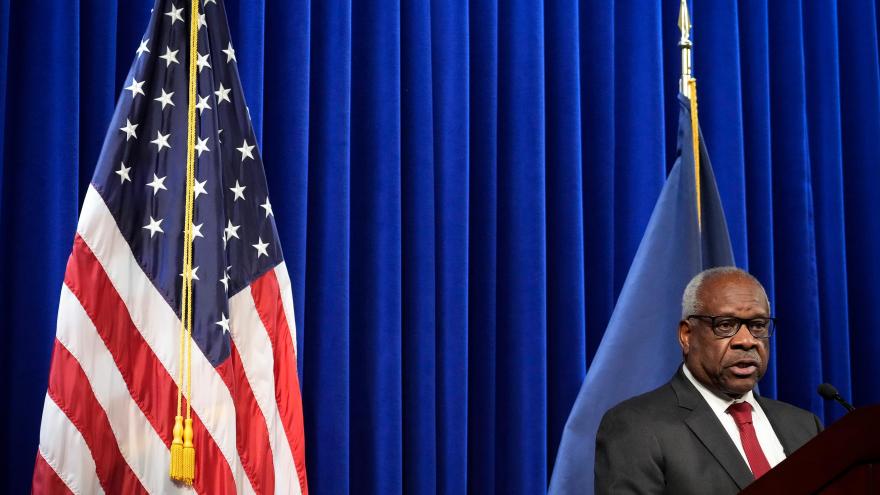 (CNN) -- Justice Clarence Thomas, following the leak of a draft majority opinion overturning Roe v. Wade, said Friday that government institutions shouldn't be "bullied" into delivering what some see as the preferred outcome.

"The events of earlier this week is one symptom of that," Thomas said. He added that "you cannot have a free society" without stable institutions.

His comments came before an audience of mostly judges and lawyers at the 11th Circuit Judicial Conference in Atlanta. Chief Justice John Roberts had addressed the same conference Thursday, calling the leak "absolutely appalling."

Thomas' comments echoed a speech from last fall when the justice decried attempts to "manipulate" institutions. Back then, he appeared to be nodding to progressive attempts to add more members to the Supreme Court to dilute the conservative majority. "I think we should be careful destroying our institutions because they don't give us what we want when we want," he said at the time.

On Friday, Thomas reiterated that he believes Supreme Court justices are obligated to take a fresh look at established precedent and shouldn't be bound by the judicial doctrine called "stare decisis." The legal principle is translated as "stand by that which has been decided" and is meant to reinforce stability in the law. Thomas has long been a critic of a strict reading of the doctrine.

"We use stare decisis as a mantra when we don't want to think," Thomas said Friday. But he noted that unlike lower courts, the Supreme Court is the "end of the line." If the justices "don't take a look at it, who does?" he asked.

He has expressed similar sentiments before, but the talk comes the same week that Politico obtained the draft opinion that sets out to overturn a nearly 50-year-old precedent.

Although not final, the February draft reflects that a majority of the court -- presumably including Thomas -- cast initial votes to overturn the landmark opinion that legalized abortion nationwide. Thomas has been clear that he thinks the 1973 opinion was wrongly decided. In June 2020, for example, he called the ruling "grievously wrong."

The 73-year-old justice has been under the spotlight lately because he spent a week in March in the hospital for what the court called an infection. Around the same time, it was revealed that the House select committee investigating the January 6, 2021, riot at the US Capitol has in its possession more than two dozen text messages, 29 in total, between former Trump White House chief of staff Mark Meadows and Virginia "Ginni" Thomas, the wife of Justice Thomas.

The existence of the texts infuriated critics who said the justice should recuse himself from any future cases regarding the select committee's work and the January 6 insurrection. In January, he was the lone public dissenter when the court allowed the release of several Trump White House documents to House investigators, although the texts from Ginni Thomas were not involved in that dispute.

The text messages took place between early November 2020 and mid-January 2021. Ginni Thomas recently revealed that she attended the pro-Trump rally that preceded the January 6 attack but said she "played no role" in planning the events of that day.

Federal law requires justices to recuse themselves from proceedings in which their "impartiality might reasonably be questioned." Another section of the law requires disqualification if a spouse has an "interest" that could be substantially affected by the outcome of the proceeding.

On Friday, Thomas -- who was being interviewed by a former clerk -- was not asked about the ethics controversy.

And before the friendly crowd, he wasn't pressed directly about the unprecedented breach of protocol that occurred when the draft opinion was disclosed on Monday.

Although the leak stunned members of the court, Thomas appeared relaxed and upbeat Friday when he was greeted by a standing ovation. The moderator commenced the talk by asking him about his health. "Well, I'm vertical," Thomas said and then burst into a booming laugh.

He touched on a wide variety of subjects, including his "bias" of hiring clerks from what he called "modest circumstances." He noted that most of the other justices hire clerks from the Ivy League, but he said that those who don't come from elite law schools bring "wisdom" and "common sense, hard work and decency." He also said opinion writing should be straightforward with an aim of "getting it right."

"There is no need to make the work product inaccessible," he said.

"It is really hard to see him leave," he said.