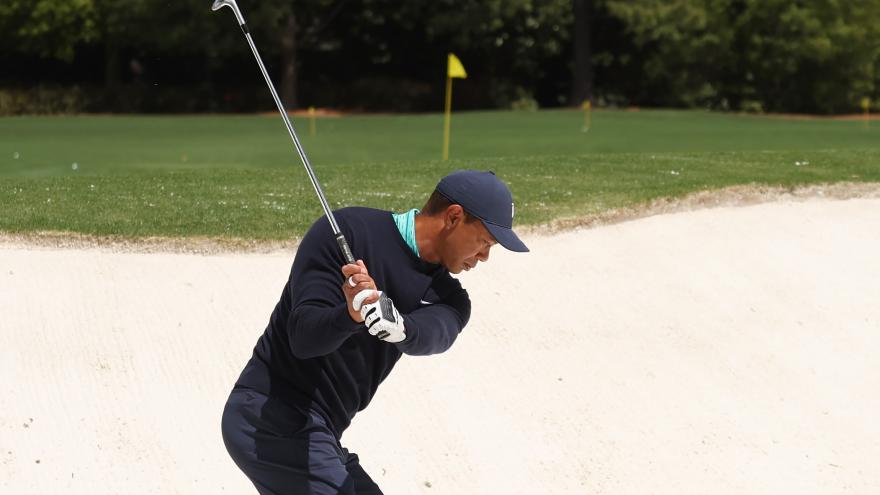 (CNN) -- Tiger Woods struggled at the beginning of his second round at the Masters on Friday following an excellent return to competitive golf.

The five-time Masters champion capped off a remarkable comeback to golf on Thursday as he carded a one-under 71 in the opening round at Augusta National.

The 46-year-old Woods displayed all his poise and experience to finish near the top of the leaderboard, just four shots off leader Im Sung-jae at the end of the day.

As he looks to complete what would be another fairytale story and make the cut in his first appearance in a professional golf tournament since his February 2021 car crash, Woods hopedfor more of the same on day two of the 2022 Masters.

And with a large crowd watching on and anticipation in the air, the 15-time major winner stepped up and blasted his ball down the first hole, only for it to find the bunker on the right of the fairway.

He would end up bogeying the opening hole, moving him back to even par for the tournament.

And his slow start to the second round continued over the next two holes, rescuing a par on the par-five second hole before missing a short putt on the third hole for his second bogey in three holes, putting him at one-over par.

Unfortunately for Woods, another bogey was to follow on the par-three fourth hole, when his par putt fell just inches short. According to the PGA Tour, the three-over through four holes start is Woods' worst score through four holes in 92 career rounds at the Masters Tournament.

It got worse for Woods still, as another bogey on the fifth hole dropped him to three-over for the tournament.

Nobody expected Woods to be playing at the Masters this year.

Following a car crash in February 2021 in which he sustained serious leg injuries, he has only appeared in public on a golf course just once -- at the PNC Championship in December with his son Charlie. Then Woods used a golf cart to help him get around the course.

Speculation first began to mount regarding Woods' participation in the tournament when his private jet was sighted landing at an airport near Augusta last week.

And a few practice rounds before the Thursday's opening round only heightened that rumor. Woods said on Monday it would "be a game-time decision" on whether he plays at the Masters.

He confirmed his participation later in the week, and has been the main draw at the tournament -- drawing huge swathes of patrons and media attention -- as he makes his way around the Augusta National course.