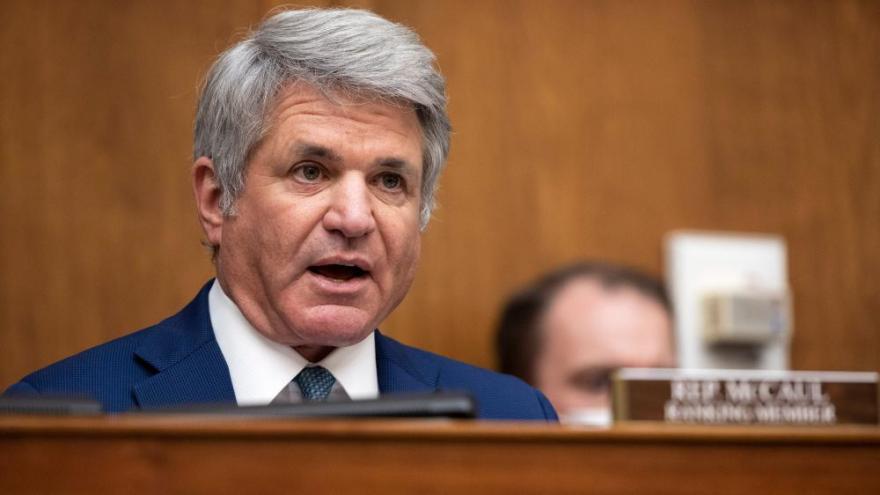 Texas Rep. Michael McCaul, a top Republican on the House Foreign Affairs Committee, claimed Sunday the origins of the coronavirus pandemic are the "worst cover-up" in human history.

(CNN) -- Texas Rep. Michael McCaul, a top Republican on the House Foreign Affairs Committee, claimed Sunday the origins of the coronavirus pandemic are the "worst cover-up" in human history.

"You know, I do think it's more likely than not it emerged out of the lab. Most likely accidentally," McCaul told CNN's Jake Tapper on "State of the Union" without providing evidence to support his claim. "This is the worst cover-up in human history that we've seen resulting in 3.5 million deaths, creating an economic devastation around the globe."

The comments from McCaul follows a directive from President Joe Biden ordering the intelligence community to redouble its efforts in investigating the origins of the coronavirus pandemic and to report back to him in 90 days. A US intelligence report found several researchers at China's Wuhan Institute of Virology fell ill in November 2019 and had to be hospitalized.

Other lawmakers have also called for answers regarding the origin of the virus and members of the House Foreign Affairs Committee, which has long been investigating the origins of the pandemic, received a classified briefing on the matter earlier this month, according to a source familiar with the matter. The source declined to say whether the intelligence report mentioning the hospitalized researchers was discussed during the briefing.

A fierce debate has raged over whether the virus escaped from a lab in Wuhan or originated in the wild. Initially, prominent scientists publicly derided the so-called lab leak theory -- embraced by then-President Donald Trump and his allies -- as a conspiracy theory, and the intelligence community put out a rare public statement in late April 2020 affirming that it "also concurs with the wide scientific consensus that the Covid-19 virus was not manmade or genetically modified."

But as early as March 27, 2020, the Defense Intelligence Agency -- which is home to one of the intelligence community's most robust scientific cells -- in a classified assessment reported by Newsweek found that it was possible that the virus had emerged "accidentally" due to "unsafe laboratory practices."

Avril Haines, the Director of National Intelligence, also testified last month that US intelligence agencies still do not know "exactly where, when or how Covid-19 virus was transmitted initially" in China but remain focused on two primary theories, that "it emerged naturally from human contact with infected animals or it was a laboratory accident."

And the Chinese government's lack of transparency and the restricted sharing of data have also hindered the intelligence community's ability to thoroughly investigate the lab leak theory. The US and Britain called on China last week to participate in a second phase of a World Health Organization investigation into the pandemic's origins, but China responded that its role in the probe "has been completed."