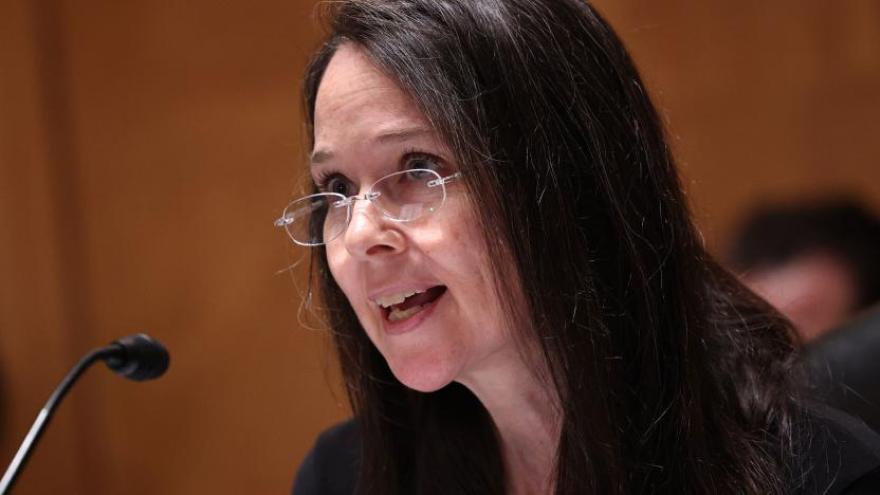 Jen Easterly, nominee to be the director of the Homeland Security Cybersecurity and Infrastructure Security Agency, testifies during her confirmation hearing on June 10, 2021.

(CNN) -- One of the nation's top cybersecurity officials said state election workers in Wisconsin and Michigan have told her they're "pleased" with the federal government's support leading up the 2022 midterm elections, while some state officials say they're not getting enough.

Jen Easterly, the director of the US Cybersecurity and Infrastructure Security Agency, or CISA, was asked by CNN's Alex Marquardt Saturday about state officials in Wisconsin and Michigan who say they aren't getting enough federal backing for elections and personnel security.

She said she "asked if they were getting everything they needed from us," adding, "they were actually pleased with everything we've been providing," reiterating there are grants available for state and local officials to strengthen their election infrastructure.

Benson had told CNN last month that sometimes there is a "breakdown where states will receive the funds and they won't make it to the locals," adding, "that then makes it harder for us to get the federal funding in future rounds because it doesn't always reach where it has to reach."

Asked by Marquardt on Saturday about Easterly's response, Benson said "we appreciate the federal support that's been provided -- it's simply not enough."

"In many ways, we are more prepared and better funded than we were in 2020," Benson added. "But the challenges we are facing are escalating. So it's gonna create a need for a regular stream of resources moving forward."

"We don't flag anything to platforms"

Easterly also noted on Saturday that it's up to social media platforms to combat disinformation, emphasizing that CISA is "very concerned about disinformation from foreign actors."

"To be clear, we don't flag anything to platforms around misinformation, disinformation," Easterly said. "That is entirely up with those platforms based on their terms of service and how they enforce it."

She added: "We focus on those state and local election officials who know the most about their voting infrastructure. We're really amplifying their voices as trusted voices."

But having "an authoritative backing from our federal partners in correcting" mis- and disinformation about voting "is really important," Meagan Wolfe, who heads the Wisconsin Elections Commission, told CNN previously. "And I think what they're providing now is less of a backing than they did around the 2020 election."

Easterly maintained "people should have confidence in the integrity of the election."

"We have no information about specific or credible threats to disrupt or compromise election infrastructure, but we are working very, very closely with state and local election officials to make sure they have everything they need on Tuesday to run safe and secure elections," Easterly said.

Benson told Marquardt that "we are at a pivotal point where there will -- and has been potential plans in place -- to try and challenge voters eligibility on Election Day, and otherwise intimidate them, as a way of promoting a political strategy to impact democracy."

Benson, whose family was harassed during the 2020 elections, added she met with the Wayne County sheriff on Saturday to discuss voter intimidation in the Detroit metro area.

"We have folks who are prepared to immediately respond to anyone who tries to intimidate any voters," Benson said, adding "we will hold them accountable if and when that happens."

CORRECTION: An earlier version of this story misidentified the Michigan official who met with Jen Easterly. It was an elections director appointed by Michigan Secretary of State Jocelyn Benson.