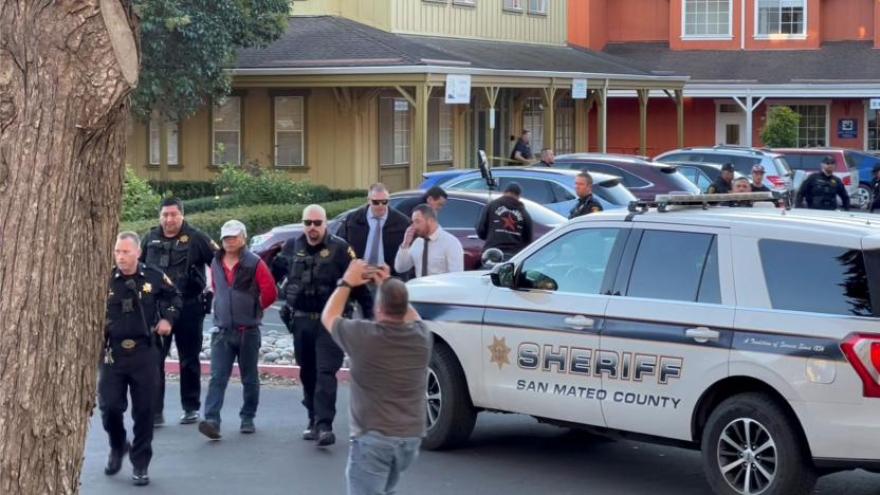 The victims in suburban Monterey Park included people between the ages of 57 and 76, ringing in the Lunar New Year Saturday night at a dance studio in the heart of the city's Asian American community.

Then it happened again.

Before authorities had released all of their names, another seven people were gunned down on Monday afternoon in a rural seaside town in northern California. The victims were immigrant laborers who toiled the land on a mushroom farm where some also lived in mobile homes and trailers.

And then again, this time in Oakland.

Communities in big cities and small towns across the US are being upended nearly every day as mass shootings in workplaces, schools and houses of worship become commonplace.

Gov. Gavin Newsom had been at a hospital with victims of the Monterey Park massacre on Monday when he was pulled away for a briefing on the rampage in Half Moon Bay.

The Democrat could have been referring to the first weeks of 2023 in America, which has already suffered 40 mass shootings this month -- more than in any other start of the year on record.

A few threads connected the violence in California -- elderly Asian gunmen in two of the cases, many victims were Asian American, as well as proximity and time. However, the greatest common denominator is a gun violence epidemic the United States seems incapable of eradicating.

"Only in America," Newsom said of the bloodshed. "The devastation is felt for generations in some cases. Communities being torn asunder. No one feeling safe."

Celebration of 'peace and hope' shattered by gunfire

The city's majority Asian community had gathered on the eve of the Lunar New Year when 72-year-old Huu Can Tran opened fire, authorities said.

A search of the suspected gunman's home turned up "hundreds of rounds" of ammunition as well as evidence that led officials to believe he was "manufacturing homemade firearm suppressors," according to Los Angeles County Sheriff Robert Luna.

The gunman unleashed 42 rounds from a semi-automatic handgun at the dance hall before heading to a second dance studio in nearby Alhambra, where a civilian charged him and wrestled the gun away from him, Luna said.

"Lunar New Year for many of our Asian American communities is the most important and celebrated holiday we have," said Connie Chung Joe, CEO of Asian Americans Advancing Justice Southern California. "We come together with families. We eat well. We have parades. (The shooting) is equivalent to having, in many parts of America, somebody gunned down at a Christmas Day parade."

Tran was found dead from a self-inflicted gunshot wound inside a white van about 30 miles away in Torrance less than a day later, the sheriff said. Authorities said he was familiar with the dance hall.

It's unclear why he targeted the mostly elderly Asian American patrons during a celebration.

"It's the year of the rabbit, a symbol of peace and hope," said Mike Fong, a California State Assemblyman. "And to have that peace and hope shattered in a matter of moments ... is unfathomable."

A vigil and word of a new massacre, an 'eerie déjà vu'

On Monday afternoon, California Assemblyman Marc Berman, a Democrat, joined colleagues at the state Capitol steps for a vigil for victims of the Monterey Park shooting when he learned of the farm massacre.

"Before we've even had a chance to mourn them, there is yet another mass shooting -- this time in Half Moon Bay. In my district," he tweeted.

California State Sen. Josh Becker, a Democrat who represents San Mateo County, told CNN that colleagues at the vigil, after learning of Monday's shootings, were left asking: "What more can we do?"

Becker added, "We pride ourselves in California as having some of the toughest gun laws in the country. But I got to tell you those don't matter a bit when there are seven people dead in your own community, when there's ... 11 people dead in Monterey Park. It doesn't matter one bit."

Henry Lo, the mayor of Monterey Park, said his community was still processing the violence and grieving the victims there when news spread about the shootings in Half Moon Bay.

"I know exactly what they're going through," he said. "It was an uncomfortable, eerie déjà vu."

He added, "In their community, like in Monterey Park, the feelings are of disbelief. Why is this happening? And shock and just sadness over a tragedy, loss of life and more violence."

Chunli Zhao, 66, who is suspected of killing four people at a mushroom farm in California and three others at a nearby site Monday, was an employee of the farm, according to San Mateo County Sheriff Christina Corpus.

Zhao was taken into custody Monday while parked at a sheriff's substation with a semi-automatic handgun in his vehicle.

Zhao lived at the property where four of the victims were killed, according to a company spokesperson.

There are three mobile homes and six trailers for about 35 employees on the property. Zhao started working at the farm before a company named California Terra Garden acquired it, said spokesman David Oates. The farm's owners are bringing in grief counselors for employees.

"We do know that some of the victims were Chinese, that the perpetrator was Chinese and that this was an agricultural community. They were agricultural workers," Half Moon Bay Mayor Deborah Penrose said Tuesday.

Officers in San Mateo County found four people dead and one person wounded at the mushroom farm. Moments later, three more people were found dead near a trucking facility about two miles away, county officials said. Authorities were alerted to the shootings at about 2:20 p.m. Monday.

"He had an opportunity we do believe to hurt other people, but he had targeted individuals that he went after and pursued," Corpus told CNN, referring to the suspect. She said the suspect was not known to local law enforcement before the shooting and had legal possession of a semi-automatic weapon that was registered to him.

"This is one of these issues where someone snaps, unfortunately, and innocent people were killed," the sheriff said.

Authorities said some of the shootings may have been witnessed by children.

Hours later, yet another 'targeted shooting'

Hours after the Half Moon Bay shootings, the bloodshed continued.

On Monday evening, in the Bay Area city of Oakland, one person was killed. Seven others were wounded and hospitalized in stable condition, police there said.

Officers responded just after 6 p.m. to an alert from a ShotSpotter, which is gunshot detection technology, the Oakland Police Department said. They found "several casings" but no victims. During the investigation, officers learned there had been a shooting between several people, according to a police statement.

Then multiple hospitals began alerting police they had received multiple patients suffering gunshot wounds who had transported themselves to emergency rooms.

Up to 50 people were out filming a music video when "gunfire broke out from multiple shooters in various directions," said the city's acting police chief, Darren Allison.

It was a "targeted shooting," and investigators are "looking into the possibility of a gang or group connection with this incident," Allison said.

Across vast swaths of California this week, anguished residents have been left grieving and searching for answers.

And yet, there's still hope

Maksym Kapitanchuk, who was dance instructor to 65-year-old Mymy Nhan, one of the victims of the shooting at the Lai Lai Ballroom, said some elderly residents have been in touch, eager to return to the dance floor.

"I know as a fact, this type of violence, it won't put them down," Kapitanchuk said. "They're going to be fighting until the end."