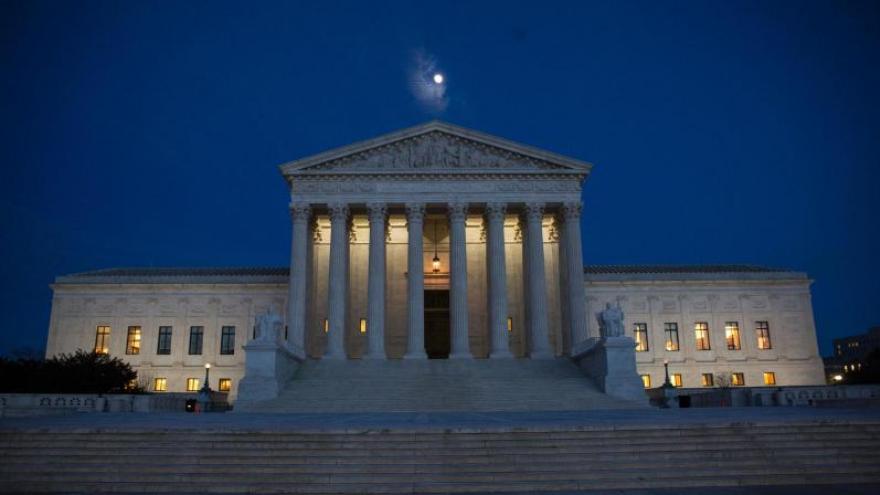 Donald Trump asks the Supreme Court to block release of his White House records to the January 6 committee.

(CNN) -- Former President Donald Trump appealed to the Supreme Court on Thursday to block the release of documents from his White House to the House committee investigating the January 6 riot at the Capitol, escalating his effort to keep about 700 pages of records secret.

Hours after Trump's request was filed, the House committee asked the justices to expedite their consideration of the request, with a proposed schedule that would allow the court to say by the middle of next month whether it was taking up the case.

The committee, which is charged with investigating the US Capitol attack to provide recommendations for preventing such assaults in the future, seeks the documents as it explores Trump's role in trying to overturn the election. That includes his appearance at a January 6 rally when he directed followers to go to the Capitol where lawmakers were set to certify the election results and "fight" for their county. The documents are currently held by the National Archives.

In filings submitted to the Supreme Court on Thursday, Trump asked the justices to take up a full review of the case and he requested that while they consider his position, they put a hold on the lower court decision permitting the disclosure of his records while they consider taking up the case.

"The limited interest the Committee may have in immediately obtaining the requested records pales in comparison to President Trump's interest in securing judicial review before he suffers irreparable harm," Trump's lawyers wrote in the court filings.

At issue are hundreds of documents including activity logs, schedules, speech notes and three pages of handwritten notes from then-White House chief of staff Mark Meadows -- paperwork that could reveal goings-on inside the West Wing as Trump supporters gathered in Washington and then overran the US Capitol, disrupting the certification of the 2020 vote. The records could answer some of the most closely guarded facts of what happened between Trump and other high-level officials, including those under siege on Capitol Hill on January 6.

Trump is also seeking to keep secret a draft proclamation honoring two police officers who died in the siege and memos and other documents about supposed election fraud and efforts to overturn Trump's loss of the presidency, the National Archives has said in court documents.

In its expedition request Thursday evening, the House committee said that any delay in the Supreme Court's consideration would "inflict a serious injury on the Select Committee and the public."

"The Select Committee needs the requested documents now to help shape the direction of the investigation and allow the Select Committee to timely recommend remedial legislation," the panel said. It said the committee and the Biden administration would file by December 30 their responses to Trump's request that the Supreme Court take up the case. The lawmakers are asking the Supreme Court to consider during its January 14 conference whether it will take up the case.

The fight over the documents stems from a lawsuit Trump filed against the Archives as well as the House committee, seeking to stop the records' disclosure. Trump is arguing that those documents should remain secret under the former President's own assertions of executive privilege, though so far, lower courts have rejected his arguments.

Thursday's filing with the Supreme Court marks an escalation of the dispute, in which President Joe Biden has determined that withholding the documents based on executive privilege is not in the interest of the United States. In a letter to the National Archives in October, White House Counsel Dana A. Remus said that the President had declined to assert privilege because Congress has a "compelling need in service of its legislative functions to understand the circumstances that led to these horrific events."

In their filings with the Supreme Court Thursday, the former President's lawyers said that the House's request for the Trump White House documents was "untethered from any valid legislative purpose and exceeds the authority of Congress under the Constitution and the Presidential Records Act."

Trump told the Supreme Court that the case posed "novel and important questions of law that the Court should resolve."

"While the protections of executive privilege and restrictions on access to presidential records are qualified, it is critical that future Presidents and their advisers understand the contours and perimeters of that privilege—and its exceptions—after the conclusion of a presidential term," Trump said in his request that the court take up the case.

Previously, both a district court judge and the DC US Circuit Court of Appeals rejected Trump's arguments in decisions that backed the legitimacy of the document requests and the investigation more broadly.

"Former President Trump has given this court no legal reason to cast aside President Biden's assessment of the Executive Branch interests at stake, or to create a separation of powers conflict that the Political Branches have avoided," the DC Circuit said in its opinion earlier this month. In its December 9 ruling against Trump, the appeals court gave him 14 days to request a Supreme Court intervention.

In his application with Chief Justice John Roberts -- who oversees emergency matters arising from the DC Circuit -- to put the appeals court decision on hold, Trump said that allowing for the documents to be released before the Supreme Court considered the case would "detrimentally impact Presidential decisionmaking for all future Presidents."

"There will not be another Presidential transition for more than three years; Congress has time to allow this Court to consider this expedited appeal," Trump wrote in the filing.

Left unsaid was that Republicans are expected to take control of the House in next year's election and would likely end the House select committee's investigation.

This story has been updated with further developments and additional information.