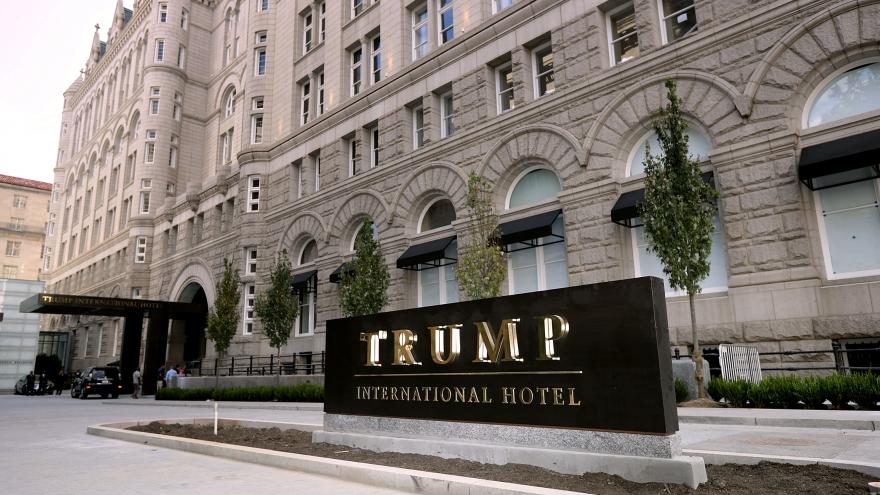 Former President Donald Trump racked up more than $70 million in losses over a four-year period from his Washington, DC, hotel, while publicly claiming that the hotel was making more than tens of millions of dollars, according to documents released by the House Oversight Committee. 2016 file photo.

(CNN) -- Former President Donald Trump racked up more than $70 million in losses over a four-year period from his Washington, DC, hotel, while publicly claiming that the hotel was making more than tens of millions of dollars, according to documents released by the House Oversight Committee.

The documents also show the hotel received millions from foreign governments in payments and loan deferral, which Trump did not disclose, raising questions about potential conflicts of interest during his presidency.

It's the first time that congressional investigators have reviewed and released details of the former president's financial information, though the Trump Organization on Friday challenged the committee's understanding of accounting and denied any wrongdoing. The Manhattan district attorney and New York attorney general investigators have reviewed Trump's financials, but none of that has been made public.

Trump's income from the Trump International Hotel reported in public financial disclosures dating from 2016 to 2020 totaled more than $156 million, the committee said Friday.

But in that four-year period, Trump's DC hotel actually suffered a net loss of more than $70 million while he was president and had to be loaned more than $27 million from one of Trump's holding companies, DJT Holdings LLC, from 2017 to 2020, according to hotel financial statements the committee obtained.

More than $24 million was not repaid and was instead converted to capital contributions, the committee said.

According to the committee, their analysis of the documents show that the Trump hotel received an estimated $3.7 million from foreign governments, which they say raises "concerns about possible violations of the Constitution's Foreign Emoluments Clause."

The documents include details that Congress chased for years during Trump's presidency, specifically information about foreign payments to Trump businesses, over which House Democrats unsuccessfully sued for under the emoluments clause of the Constitution. The emoluments clause, an anti-corruption provision written by the nation's founders, said Congress should be able to approve any gifts to officeholders from foreign governments. But despite the House's years-long interest in an autopsy of Trump's finances, congressional approval of foreign payments the Trump Organization took in never happened.

In a statement, a spokesperson for the Trump Organization called the findings by the committee "intentionally misleading, irresponsible and unequivocally false," arguing that the committee "has a fundamental misunderstanding of basic accounting principles -- including the difference between gross revenue and net profit," and said profits were donated back to the US Treasury. The spokesperson also said the company "invested a significant amount of time and money to save this crumbling asset which was costing American taxpayers millions of dollars each year."

"Simply stated, this report is nothing more than continued political harassment in a desperate attempt to mislead the American public and defame Trump in pursuit of their own agenda," the spokesperson said.

Deutsche Bank also accused the committee of making "several inaccurate statements regarding Deutsche Bank and its loan agreement." The loan terms did not change and there was no deferral of payment, a person familiar with the matter said.

CNN has reached out to the GSA and the House Oversight Committee for comment.

In July, the GSA turned over documents that included Trump Hotel's audited financial statements from 2014 through 2020 prepared by WeiserMazars LLC, Trump's accounting firm and three years' worth of Trump's statements of financial condition compiled by Mazars.

Various House committees have also been pursuing Trump's tax returns and other financial documents from Mazars USA and Deutsche Bank for years, unsuccessfully.

The documents released Friday raise "troubling questions" about the lease with the General Services Administration and the "agency's ability to manage the former President's conflicts of interest during his term in office when he was effectively on both sides of the contract, as landlord and tenant," the Oversight Committee's Democratic chair Carolyn Maloney wrote in a letter Friday to the GSA.

The committee is also requesting that the GSA produce more documents by the end of two weeks.

The GSA, which manages federal buildings and land, awarded the lease for the Old Post Office building in 2012. Trump opened the hotel in 2016, when he was the Republican nominee for President.

Since then, the Oversight Committee has been investigating conflicts of interest regarding GSA's management of the Trump hotel lease.

When he took office, Trump resigned from his companies but transferred his assets to a trust run by his sons, allowing him to still benefit financially from the DC hotel and his other businesses.

In 2019, the inspector general of the GSA said the agency "ignored the Constitution" when deciding to maintain the lease of the building to the hotel after Trump was elected to the White House.

This story has been updated to include additional reporting and reaction.