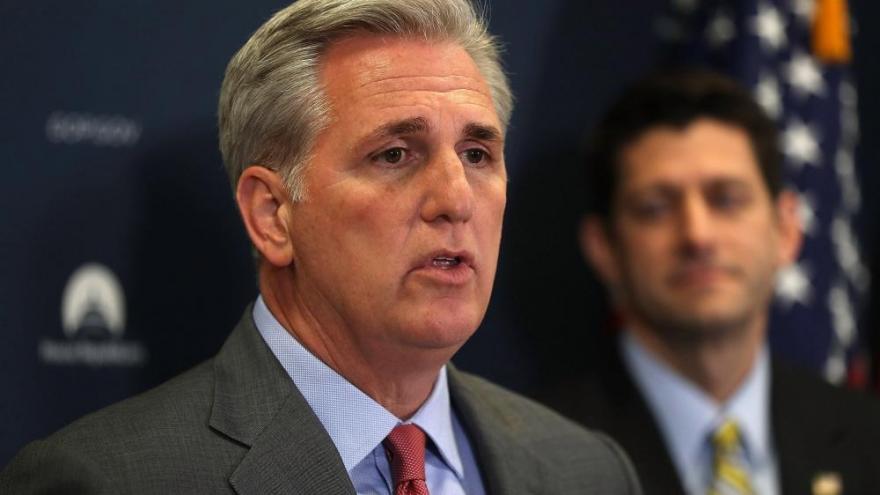 House Minority Leader Kevin McCarthy on Sunday cited video games in the wake of two massacres in Texas and Ohio that left at least 29 people dead.

(CNN) -- President Donald Trump and House Minority Leader Kevin McCarthy are citing video games as one of the reasons behind mass shootings in the US.

The comments from the two Republican leaders come as a grieving nation struggles to agree on ways to prevent future gun violence in the wake of the massacres in Texas and Ohio that left at least 29 people dead. Congressional Republicans have resisted efforts to restrict the use and availability of assault-style weapons, and a sweeping gun control bill that passed the House with bipartisan support in February that requires universal background checks has not been considered by the Republican-led Senate.

"We must stop the glorification of violence in our society," Trump said in remarks from the White House Monday morning as part of a list of efforts he believes the nation must take. "This includes the gruesome and grisly video games that are now commonplace."

He added, "It is too easy today for troubled youth to surround themselves with a culture that celebrates violence. We must stop or substantially reduce this and it has to begin immediately."

Trump did not mention specific measures to limit access to firearms except proposing "red flag" laws that would prevent access to people who are mentally ill.

McCarthy, a California Republican, also cited video games as a driver behind gun violence in an interview with Fox News on Sunday.

"But the idea of these video games that dehumanize individuals to have a game of shooting individuals and others -- I've always felt that is a problem for future generations and others. We've watched from studies shown before of what it does to individuals. When you look at these photos of how it took place, you can see the actions within video games and others," McCarthy said.

Hillary Clinton, who unsuccessfully challenged Trump in the 2016 presidential race, dismissed video games as a possible reason for the shootings.

It was not immediately clear if video games played any role in the weekend's carnage.

In the El Paso shooting, the alleged shooter -- identified as Patrick Crusius, of Allen, Texas -- is believed to have authored a four-page document online shortly before the shooting, filled with white supremacist language and racist hatred aimed at immigrants and Latinos and blames immigrants and first-generation Americans for taking away jobs.

The writer cited a fear that an influential Hispanic population in Texas would make the state a "Democratic stronghold." But he says "the Republican Party is also terrible" because the GOP is in his mind pro-corporation, which could lead to more immigration.

The shooter in the Ohio, a 24-year-old male, was shot and killed by responding officers. Police have not released a possible motive behind the attack, and two federal law enforcement sources have told CNN that a preliminary assessment of the shooter's writings did not indicate any racial or political motive.