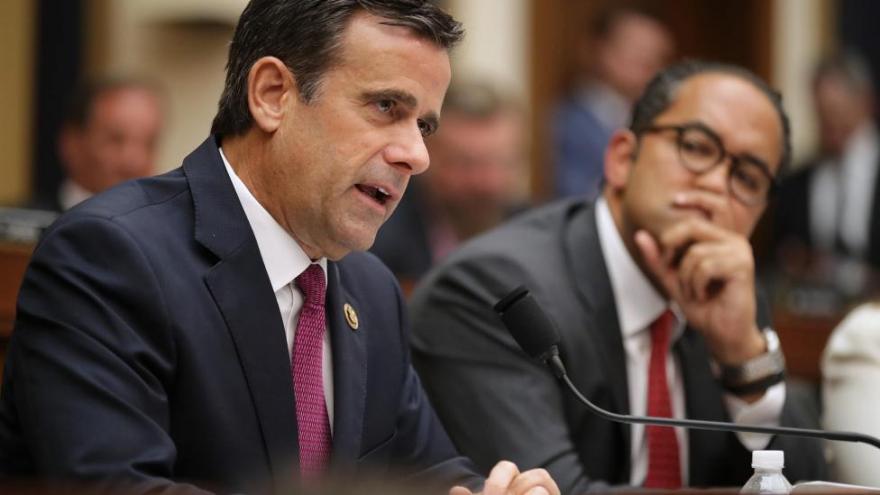 President Donald Trump's nomination of John Ratcliffe to replace Dan Coats as the next Director of National Intelligence would launch a lawmaker with less than five years national experience under his belt to the pinnacle of US espionage and sets the stage for what is likely to be a bruising and partisan confirmation battle.

(CNN) -- President Donald Trump's nomination of John Ratcliffe to replace Dan Coats as the next Director of National Intelligence would launch a lawmaker with less than five years national experience under his belt to the pinnacle of US espionage in one of the most powerful and sensitive jobs in government.

It also sets the stage for what is likely to be a bruising and partisan confirmation battle with critics arguing he earned the nomination as a reward for loyalty to Trump and not because he has relevant experience for the role.

The Texas Republican has been a vocal critic of Robert Mueller and his investigation into collusion between the 2016 Trump campaign and Russia, grilling the special counsel during House hearings last week -- a performance that likely earned him the President's gratitude.

The former mayor also contends that there were "crimes committed" during the Obama administration in connection to the events that led to Mueller's probe and called on Sunday for investigations to get to the truth.

"I'm not going to accuse any specific person of any specific crime," Ratcliffe said on Fox News' Sunday Morning Futures. "I just want there to be a fair process to get there. What I do know, as a former federal prosecutor, is, it does appear that there were crimes committed during the Obama administration."

Trump unveiled the nomination by tweet, saying he was "pleased to announce that highly respected Congressman John Ratcliffe of Texas will be nominated by me to be the Director of National Intelligence. A former U.S. Attorney, John will lead and inspire greatness for the Country he loves."

Ratcliffe responded Sunday night on Twitter, saying he's "deeply grateful to President Trump for the opportunity to lead our Nation's intelligence community and work on behalf of all the public servants who are tirelessly devoted to defending the security and safety of the United States."

Ratcliffe had been under consideration for an administration position for a while but was considered by some inside the West Wing to be too nice, according to an official familiar with the dynamic. They didn't think he was aggressive enough but his aggressive questioning of Mueller on Wednesday changed the thinking on that.

The congressman initially wanted the job of attorney general, but after Trump selected William Barr to replace Jeff Sessions, the window on that opportunity effectively closed. Trump was so impressed by Ratcliffe's performance during the Mueller hearing — deeming him a "warrior" — that he decided he wanted him for the Coats job.

Another trusted Trump ally -- Secretary of State Michael Pompeo -- has charted a path from the back benches of the House of Representatives to the senior levels of US power.

But the nomination of a staunchly conservative politician to a non-partisan position -- one that has little to nothing to do with domestic investigations -- along with Ratcliffe's lack of experience and the serious geopolitical challenges facing the US mean the three-term lawmaker's confirmation is anything but assured.

'Simply not as qualified'

"He's simply not as qualified for the job as his predecessors," said David Priess, a former CIA intelligence officer who delivered the daily intelligence briefing during the administrations of former Presidents Bill Clinton and George W. Bush.

"Do not take confirmation for granted," Priess added. "The only thing that points to his appointment at this time is the fact that he was strident and energetic in his criticism of Robert Mueller during last week's hearing."

Priess, now a national security fellow at George Mason University, said the Republican-controlled Senate has in the past pushed back against Trump's nominees. "Yes, the President has many allies in the Senate, but there have been many nominations and prospective nominations when it was made clear the Senate would not accept it," he said.

She made no mention of Ratcliffe and neither did Senate majority leader Mitch McConnell, who released an extended statement praising Coats for his "deliberate, thoughtful, and unbiased approach."

The Senate's Democratic leader, Chuck Schumer of New York, focused on the House lawmaker in his own statement.

"It's clear that Rep. Ratcliffe was selected because he exhibited blind loyalty to President Trump with his demagogic questioning of former Special Counsel Robert Mueller," Schumer said. "If Senate Republicans elevate such a partisan player to a position that requires intelligence expertise and non-partisanship, it would be a big mistake."

But Rep. Mark Walker of North Carolina, the ranking Republican on the Homeland Security Subcommittee on Intelligence and Counterterrorism, offered effusive praise, saying "the only thing stronger than his credentials is his character" and adding that he could "think of no one better" for the job.

The job in question -- Director of National Intelligence -- was a Cabinet level position created after the 9/11 attacks to better coordinate intelligence. The director doesn't have the authority to issue orders. Instead, the position is more about coordinating and overseeing.

The director heads the entire US intelligence community, directs and oversees the National Intelligence Program, advises the President and his Cabinet, and produces the President's Daily Brief, the collection of information from across the agencies that most presidents see every day.

The 53-year-old Ratcliffe would come to the job with eight years' experience as mayor of Heath, Texas, a town of just under 9,000 people. He has been a US Attorney and federal terrorism prosecutor, spent time in private practice as a partner with former Attorney General John Ashcroft at his law firm, and worked as an aide to Sen. Mitt Romney during his 2012 presidential campaign.

In the House, Ratcliffe has served on the Intelligence, Homeland Security, Judiciary and Ethics Committees.

Priess, the former intelligence officer, said this resume doesn't compare positively to previous directors, most of whom spent a lifetime in military or foreign service. "One of the reasons there are serious questions here, all we have to do is look at the five men who have served in this position and then look at Ratcliffe," he said.

Past directors include John Negroponte, a former foreign service officer and ambassador several times over; Michael McConnell, a former National Security Agency director; Dennis Blair, a former commander of US forces in the Pacific; and James Clapper, who ran the Defense Intelligence Agency and the National Geospatial Agency.

Coats had less intelligence experience than the others, but he had been ambassador for Germany and "served on Senate select committee on intelligence for years," Priess said.

"You look at Ratcliffe and there's no comparison," Priess continued. "He's only been in the House a few years, and he's barely been on the intelligence committee. He doesn't come close to matching the experience of those other men or the objectivity of those other men in their previous positions."

Gregory Treverton, a former chairman of the National Intelligence Council, echoed Priess' concerns about Ratcliffe's partisanship. "I worry about the combination of amateur and political, especially since he seems quite ideological," he said.

Ratcliffe was a key lawmaker in the 2016 Republican-led House investigation into the FBI and Justice Department's handling of both the Hillary Clinton and Russia investigations, working closely with former Rep. Trey Gowdy of South Carolina.

When Gowdy retired this year, Ratcliffe took his place on the House Intelligence Committee, in addition to his seat on the Judiciary Committee, putting him in a key position to push back on the panel's Democratic-led investigations into the President.

Ratcliffe's aggressive questioning and skepticism about the Bureau during the 2016 probes gained him the trust of fellow conservatives in the House GOP Conference, and he played a key role in the Mueller hearings, jumping up in seniority on both committees as the second Republican to question Mueller immediately following the ranking members.

Ratcliffe charged that the special counsel had gone beyond his mandate by stating he couldn't exonerate Trump.

But Ratcliffe's criticisms of the Mueller investigation are also likely to be a key point as Democrats press him on in his confirmation hearing. His push on Fox News' Sunday program for an investigation into the Obama administration will likely be a factor as well.

In his interview, Ratcliffe said that "the Mueller report and its conclusions weren't from Robert Mueller. They were written what a lot of people believe was Hillary Clinton's de facto legal team."

"We know that things happened in the Obama administration that haven't been answered. There's been no accountability for that yet," he said.

Arguing that the American people have lost trust in the Justice Department, he said the "only way to get that back is, therefore, to be real accountability with a very fair process" and that he has "supreme confidence" in Attorney General Bill Barr's ability to deliver that.

"And at the end of the day, wherever the outcome may be, as long as we know that the process was fair, the evaluation was fair, justice will be done," he said.