Trump planning rallies in Ohio and Florida this summer 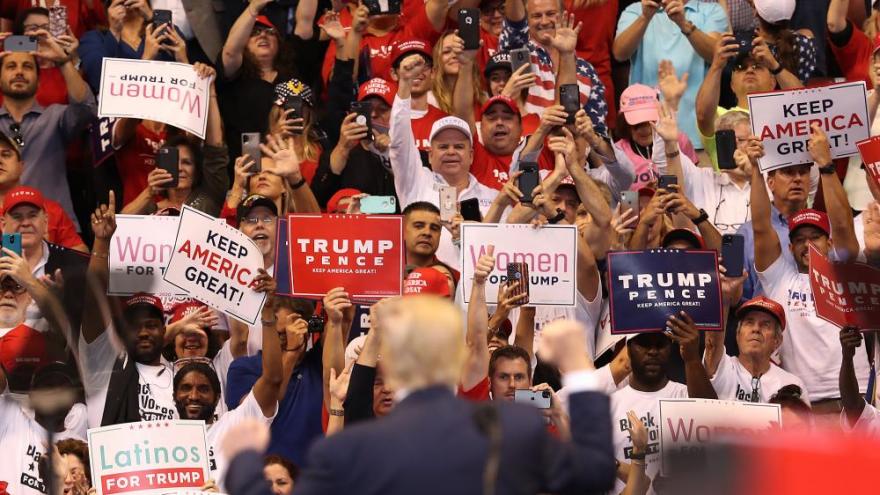 People are seen here cheering as they listen to former President Donald Trump speak during a homecoming campaign rally in 2019 in Sunrise, Florida.

(CNN) -- Former President Donald Trump plans to resume his signature campaign-style rallies in a series of battleground states this summer as he inches closer to a decision on whether to mount a comeback presidential bid in 2024.

"We'll be announcing them very soon over the next week or two," Trump said.

Aides close to the ex-President's political operation previously told CNN that Trump has been eager to return to the rally stage since earlier this year and had tasked a small group of advisers to look into the logistics of planning such events. The freewheeling MAGA rallies -- some of which ran more than two hours in below-freezing temperatures near the end of his 2020 campaign -- have long been Trump's primary way of galvanizing his core supporters and generating headlines.

While he is not on the ballot for the 2022 midterm elections, Trump has publicly committed to assisting embattled GOP incumbents and insurgent Republican candidates who have shown fealty to him and his false claims of mass election fraud in the 2020 presidential contest. That includes in Ohio and North Carolina, where crowded fields of Senate Republican hopefuls are already taking shape -- but where Trump has declined to make endorsements so far.

A person close to Trump said he has been eyeing the July 4 holiday as a target date for one summer rally, and is working with his team to schedule at least two others in the coming weeks. There are looming questions, however, about the structure of such events, which can cost several hundred thousand dollars to organize and may be prohibited in certain jurisdictions where Covid-19 crowd size restrictions remain in place.

"It will definitely be different in terms of the setup, but we got really good at planning these events in 2020, so we will probably use a lot of those same vendors again," a person close to Trump's post-presidential operation told CNN last month.

The former President has made limited public appearances since leaving office on January 20 and taking up residence at his Mar-a-Lago resort in Palm Beach, Florida. Besides delivering remarks in February at the annual Conservative Political Action Conference in Orlando, he has made impromptu cameos at political fundraisers and weddings around his oceanfront property and spoke privately to Republican donors at a spring retreat hosted by the RNC in early April.

In both his CPAC speech and televised interviews since, he has continued to tease a potential White House bid in 2024 -- a shtick that has begun to frustrate some of his own allies who are urging him to make a decision sooner rather than later. While some potential 2024 GOP contenders like former New Jersey Gov. Chris Christie have said they will not be influenced by Trump's decision to join the field or forgo a campaign, others have said they will decline to run should the former President mount a comeback bid.

"I'm going to make a decision at the right time, and I'll let you know," Trump said Thursday.

CORRECTION: An earlier version of this story misstated the location of Mar-a-Lago. It is located in Palm Beach, Florida.