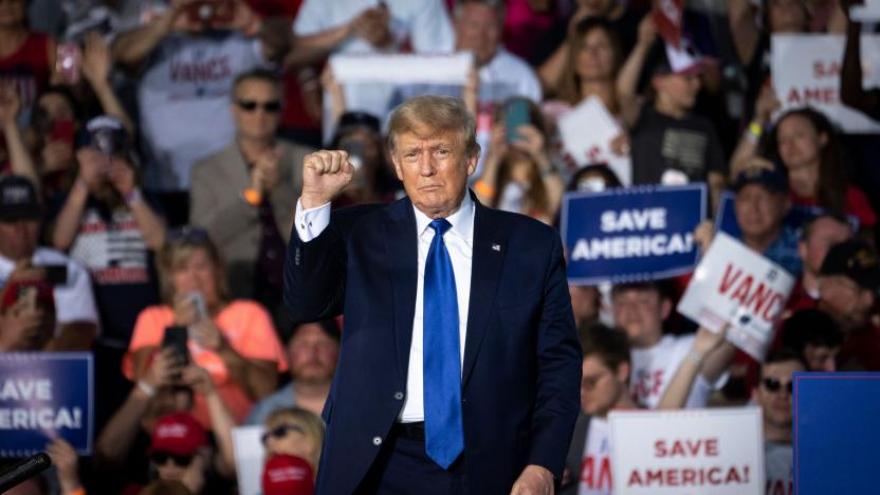 Former President Donald Trump, seen here on April 23, said in a sworn affidavit that he doesn't have any documents sought by the New York attorney general in its investigation of the Trump Organization's finances.

(CNN) -- Former President Donald Trump said in a sworn affidavit that he doesn't have any documents sought by the New York attorney general in its investigation of the Trump Organization's finances.

The one-page signed affidavit filed with the court Friday was Trump's unsuccessful attempt to end the civil contempt and daily fine of $10,000 per day imposed on him earlier this week by New York state Judge Arthur Engoron.

After a brief telephonic hearing Friday morning, the judge denied Trump's motion to purge the contempt.

"Mr. Trump's personal affidavit is completely devoid of any useful detail. Notably, it fails to state where he kept his files, how his files were stored in the regular course of business, who had access to such files, what, if any, the retention policy was for such files, and, importantly, where he believes such files are currently located," he wrote. The judge also found the sworn statement from Trump's attorney unsatisfactory.

The judge previously said Trump could end the contempt if he complied with the subpoena or him or his attorneys detailed their efforts to search for documents sought by the subpoena. He called Trump's lawyer's earlier response "boilerplate."

In the sworn statement signed April 27, Trump wrote, "To the best of my knowledge, (i) I do not have any of the documents requested in the subpoena dated December 1, 2021 in my personal possession." He said any records would be in the possession of the Trump Organization and he has authorized them to comply with the subpoena. The former President has also appealed that order.

Lawyers with New York Attorney General Letitia James objected, writing in a letter to the judge, "Mr. Trump's two-paragraph affidavit adds no useful information to the mix. Mr. Trump merely states off the top of his head, with no hint that he conducted any type of search, that he has no documents in response to the December 2021 subpoena in his 'personal possession.'"

They also said affidavits from Trump's attorneys provide some new information about their search, but "they are insufficient to purge the finding of contempt."

If after the review is complete and if no new records are recovered, the attorney general's office said it would suggest that Trump didn't preserve records.

"It is simply not plausible that Mr. Trump authored only three documents dealing with the value of his assets and his wealth," they wrote.

The attorney general's office said additional files still need to be searched by Trump's lawyer or HaystackID, the third-party firm hired for document production, before they would be satisfied. Among those files: all of Trump's hard copy files in Trump Tower or its off-site storage, all the paper files of Trump's executive assistants, all electronic devices, including cell phones and computers, belonging to Trump and his assistants, and every property where Trump maintains a personal office or residence.

HaystackID will complete most of the review of materials at Trump Tower by May 6, the attorney general's office said. They noted that Haystack identified two flip cellphones belonging to Trump but the attorney general's office said since Trump reportedly used a smartphone "he apparently has, or must have had in the past, one or more other phones that he obtained for personal use."

In addition, investigators took issue with Trump's attorney relying on previous searches conducted by the Trump Organization's lawyer in response to earlier subpoenas.

In a sworn affidavit, Trump's attorney Alina Habba, said she had checked some of the records and had gone to Florida to speak with Trump himself. She said Trump did not have an documents at his homes in Bedminster, New Jersey, or Mar-a-Lago, Florida.