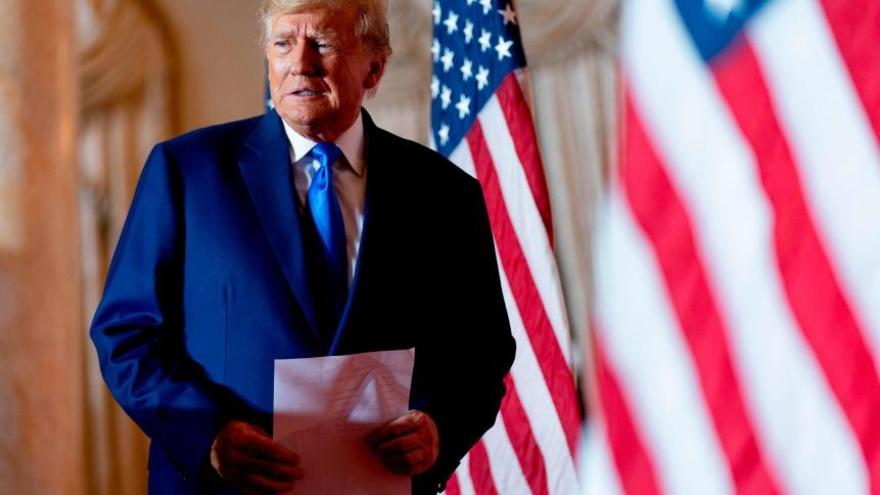 (CNN) -- Former President Donald Trump has sued the House select committee investigating January 6, 2021, as a way to challenge its subpoena for documents and his testimony, according to filings in a federal court in Florida.

Trump is challenging both the legitimacy of the committee -- which multiple courts have upheld -- and is claiming he should be immune from testimony about the time he was president.

Trump's lawyers say they've communicated with the House over the past week and a half as the subpoena deadlines neared, offering to consider answering written questions while expressing "concerns and objections" about the bulk of the document requests.

"The Subpoena's request for testimony and documents from President Trump is an unwarranted intrusion upon the institution of the Presidency because there are other sources of the requested information, including the thousand-plus witnesses the Committee has contacted and one million documents that the Committee has collected," his attorneys argue in the suit. "The Committee also may obtain abundant government records relevant to its inquiry. Because of this obvious availability to obtain testimony and documents from other readily available sources, the Subpoena is invalid."

A spokesperson for the January 6 committee declined to comment.

Trump said the House's demands, if he met them, would violate privilege protections around the executive branch, including revealing conversations he had with Justice Department officials and members of Congress about the 2020 election and "pending governmental business."

He also argued to the court that he shouldn't have to reveal inner workings about his 2020 presidential campaign, "including his political beliefs, strategy, and fundraising. President Trump did not check his constitutional rights at the Oval Office door. Because the Committee's Subpoena to President Trump infringes upon his First Amendment rights it is invalid."

Trump's attorney, David Warrington, said in a statement in part that "long-held precedent and practice maintain that separation of powers prohibits Congress from compelling a President to testify before it."

The lawsuit veers the Trump subpoena fight toward a likely dead-end for the House select committee.

Trump's back-and-forth with the House followed by the lawsuit will make it much harder for the committee to enforce the subpoena -- and the dispute essentially will be unresolvable before the current Congress expires in January.

The lawsuit also raises some protections around the presidency that have never fully been tested by appeals courts, and Trump brought the lawsuit in a court that, unlike DC, hasn't weighed in on his standoffs with House Democrats over the past several years.

Trump provided to the court his team's recent letters with the committee, which show that the House panel tried to zero in last week on obtaining records of his electronic communication on personal phones, via text or on other apps from January 6, 2021. The House also said it sought to identify every telephone and other communication device Trump used from Election Day until he left the presidency, according to the letters.

In one letter on November 4, the original date of the document-turnover deadline, the House committee accused Trump's team of trying to delay.

"Given the timing and nature of your letter -- without any acknowledgment that Mr. Trump will ultimately comply with the subpoena -- your approach on his behalf appears to be a delay tactic," wrote Rep. Bennie Thompson, the Mississippi Democrat who chairs the committee.

Since Trump's team replied on November 9 that he wouldn't testify and found no records to turn over related to personal communications, the House hasn't respond substantively, the court papers said.

But Trump's legal team responded to the House this week that Trump "voluntarily directed a reasonable search for documents in his possession" that could fit those two categories. The search found nothing, his lawyers said.