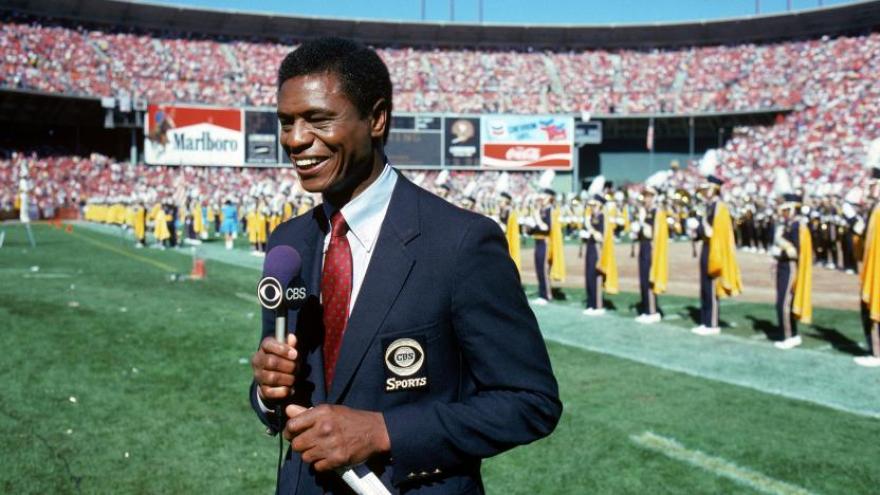 Cross was the first African American sports analyst on national television when he worked for CBS Sports as an NFL analyst and commentator from 1971 to 1994.

He anchored the Emmy-winning show "The NFL Today," from its inception in 1975 through 1989. Cross also covered other sports, including the NBA, track and field and gymnastics.

"Irv was a pioneer who made significant contributions to the storied history and tradition of CBS Sports and, along with Phyllis George and Brent Musburger, set the standard for NFL pregame shows with THE NFL TODAY," Sean McManus, the chairman of CBS Sports, said in a statement.

"He was a true gentleman and a trailblazer in the sports television industry and will be remembered for his accomplishments and the paths he paved for those who followed."

Musburger added in a statement, "I've been around all kinds of people, from every walk of life. I don't know that I could give you one person who was nicer than Irv Cross. He was a constant gentleman."

In 2009, Cross was the recipient of the Pro Football Hall of Fame's Pete Rozelle Radio-Television Award. The award, which is given annually, recognizes "long-time exceptional contributions to radio and television in professional football."

Before broadcasting, Cross played nine seasons in the NFL -- six for the Philadelphia Eagles and three for the Los Angeles Rams.

He was drafted in the seventh round of the 1961 NFL draft by Philadelphia. After two Pro Bowl seasons with the Eagles in 1964 and 1965, Cross was traded to the Rams. He would return to Philadelphia in 1969, becoming a player and coach. After retiring in 1970, he became an Eagles assistant coach.

In his nine seasons, Cross had 22 interceptions, 14 fumble recoveries and two defensive touchdowns.