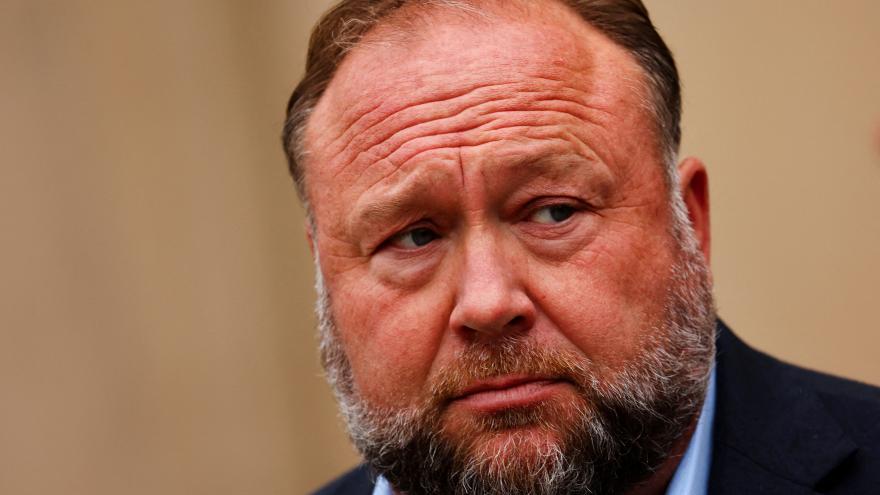 (CNN) -- Conspiracy theorist Alex Jones won't be returning to Twitter and will remain banned from the platform, according to its new owner, Elon Musk.

Musk declared on Friday that Jones' account will not be restored, in spite of some users' requests, and spent the weekend defending the decision even as Twitter moved to restore other suspended accounts including that of former President Donald Trump.

"No," Musk tweeted flatly in response to one user's call for Jones to be reinstated on Twitter.

Musk elaborated on his position Sunday evening, citing Bible scripture and his own personal experience with Sudden Infant Death Syndrome to explain his opposition to Jones, who has been ordered to pay hundreds of millions of dollars in damages for his lies about the 2012 Sandy Hook Elementary School shooting.

"My firstborn child died in my arms. I felt his last heartbeat," Musk tweeted. "I have no mercy for anyone who would use the deaths of children for gain, politics or fame."

The announcement on Jones prompted a flood of replies, with some Twitter users commending Musk for continuing to deny Jones a platform while others, including some of Jones' own self-professed supporters, said it showed Musk's inconsistent and arbitrary support for free-speech principles.

After one Twitter user criticized Musk's decision and expressed disappointment that Jones would not be allowed back on Twitter, Musk replied: "Too bad."

The episode underscores the chaotic and seemingly improvisational management style that has characterized Musk's ownership of one of the world's top social media platforms.

Musk's decision on Jones, issued abruptly and with finality, contrasted sharply with the billionaire's approach to Trump — which was based on an unscientific Twitter poll whose results Musk tried to portray as the will of the people, even as he suggested the poll was being manipulated by anti-Trump bots while voting was still open.

The account decisions also appear to backtrack on his promises not to make any "major content decisions or account reinstatements" before convening a new content moderation council. On Nov. 9, Musk told advertisers during a Twitter Spaces event that it could be months before the council meets for the first time.

Musk's approach has now raised fresh questions from users about the rubric he will use to determine the future of individual suspended accounts — a decision matrix that users increasingly perceive as grounded in Musk's personal beliefs and driven by his whimsy, rather than by objective free-speech principles or clear terms of service.