Two boys selling lemonade were robbed at gunpoint. Then their community stepped in to help 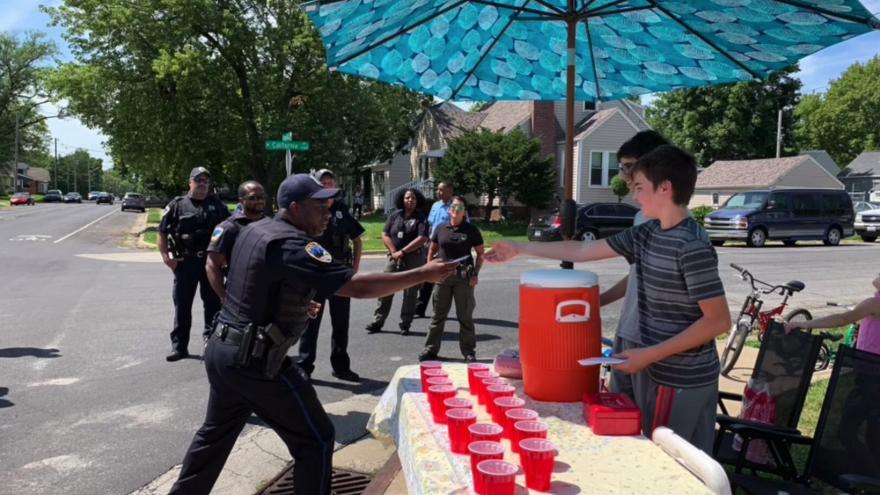 Peoria police officers lined up to purchase lemonade from the stand.

(CNN) -- An Illinois community is rallying behind two 13-year-old boys after their lemonade stand was robbed at gunpoint.

Jude and Tristan were selling lemonade in Peoria on August 7 when they were approached by two men, one who was holding a gun, said Officer Amy Dotson of the Peoria Police Department. CNN is identifying the boys by their first names to protect their privacy.

The men stole their cash box, which contained around $30, and fled on foot. The incident is still under investigation and no arrests have been made, according to police.

"The boys were just shocked, they couldn't process what was happening until it was over," Nathan Peterson, Jude's father, told CNN. "I got a call from police saying, ''Hey, your kids are OK, but they just got robbed.' I almost blacked out, I was just so scared I was trying to get there as fast as possible."

But when he arrived at the scene, Peterson found something he didn't expect.

Police officers had surrounded the lemonade stand, buying cups of lemonade and "paying maybe $20 each for it," trying to make the kids feel safe again, he said.

"I was relieved," Peterson said. "They created a very protective environment for the boys. This situation could have ended so badly, but somehow they helped turn what could have been a horrible experience into something beautiful."

But the love didn't end there.

A community rallies together

As news of the incident spread through Peoria, neighbors, friends, and even strangers began donating money to the boys to encourage them not to give up. So far, more than $3,500 has been raised through Facebook fundraisers and PayPal donations, according to Peterson.

"There was so much love poured out on them so fast after the incident, and so much of it for so many days in a row, that their main experience from this incident has been of love and support," he said.

"The intent of this money comes from a deeper place, just wanting to live in a world that's safe for a 13-year-old to have a lemonade stand. We wanted to show love back to the community and thought the best way to do that is for the boys to continue their stand so the community can see that yes, what you did made a difference."

On Tuesday, just four days after the robbery, Jude and Tristan reopened their stand. Dozens of people came by, buying lemonade and sharing kind words. But they weren't the only ones to make an appearance.

"A police armadillo truck (a modified armored car) followed by about 15 police cars all with their lights on paraded in front of their stand and parked on the side street. I'm getting teary eyed just talking about it," Peterson said.

"The officers and police chief got out of their cars and talked to the boys and told them how much they supported them. They gave them a donation and took turns buying lemonade. It just made them feel so safe and encouraged."

The Peoria Police Department posted a video on Facebook showing police cars lining up the street and officers purchasing cups of lemonade from the boys.

Tristan said he felt overwhelmed by the community's support.

"The robbery itself felt surreal. But the response from the police and community made me so happy," he said. "I think there will be less robberies in Peoria because of the way we celebrate the good and are proactive about correcting the bad."

It also inspired him to want to help others.

After the robbery, Peterson said he was willing to do "whatever it took" to protect his son, and even considered moving to another city. But the support they received from the community reassured him that his family was right where they should be.