Two ultra-fast delivery startups shut down in one week 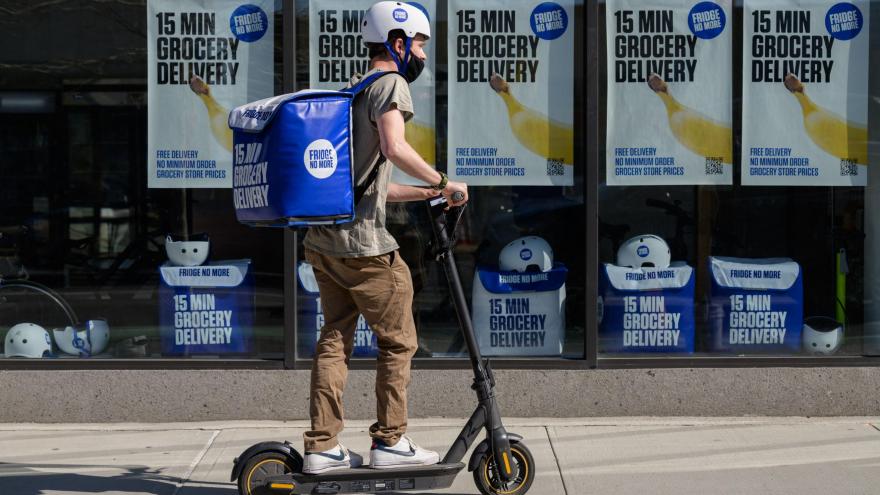 (CNN) -- Fridge No More, a startup that offered fast delivery with no fee regardless of size order, told employees this week that it was shutting down after a deal with a potential buyer fell through.

The closure was the second in the span of a week by an ultra-fast delivery service in New York City after failing to secure a deal or financing, leaving hundreds unemployed.

After the pandemic made on-demand delivery startups a lifeline for many Americans, the New York City landscape became crowded with startups offering ultra-fast deliveries. Fridge No More launched in October 2020, followed by competitors Jokr, Gorillas, and Buyk, which came in September 2021. A month later, Philadelphia-based GoPuff entered the city, followed by Istanbul-based Getir in December. Their fight for consumers brought rich discounts and splashy marketing, but the long-term potential of the business model remains unclear.

Fridge No More CEO Pavel Danivol told employees in an email Thursday that a deal with a potential buyer fell through two days earlier and that it could not continue operating.

"This decision was sudden and unforeseeable," Danivol wrote in the email, a copy of which was viewed by CNN Business.

"Due to the dramatic and unexpected lack of funding and failure to close the sale of Fridge No More," the email continues, "this letter shall serve as notice to you that there will be a mass layoff."

Though the buyer was not named in the email, a source familiar with the deal talks told CNN Business that DoorDash, the publicly-traded delivery company, had discussed acquiring select assets of Fridge No More, such as its real estate and products, in recent weeks and had been providing an undisclosed amount of bridge financing -- a type of funding startups sometimes use to continue operations in between formal funding rounds -- as it assessed a deal.

DoorDash, which recently launched its own ultra-fast delivery service in New York City, ultimately walked away over a number of factors, the person said.

The New York Post earlier reported Fridge No More's layoffs and its talks with DoorDash.

Buyk, which touted 15-minute grocery deliveries in New York City and Chicago with no minimum order or fees, confirmed to CNN Business that its 870 employees were laid off on Friday. The news comes days after the New York Post reported the startup had furloughed the vast majority of its employees, as well as its CEO, due to challenges over Russia sanctions. Buyk's Russian founders had been providing bridge financing until the company closed its next financing round, a spokesperson for the company told CNN Business.

"However, the restrictions [Russian President] Putin has imposed in response to US sanctions have made this bridge financing setup untenable, despite neither of our founders being sanctioned," the spokesperson said in an email.

While ties to Russia may have complicated matters, the sudden failure of the two startups due to inability to secure capital quickly underscores a more fundamental issue with their businesses. "The worst business model ever created was rapid grocery delivery," said Brittain Ladd, a food supply chain consultant who said he has advised a number of companies in the space and formerly worked in strategy at Amazon.

Ladd said that some of the startups lack a path to profitability and are reliant on venture capital funding, calling it "the only reason [they're] able to exist."

"It is too similar to Kozmo.com," said Ladd, of the infamous dot-com era delivery startup that raised hundreds of millions in capital on a similar premise before going bust.

Essence Wilson, who worked as a part-time courier for Fridge No More in New York City, told CNN Business that she'd sometimes have to ride her company-owned scooter manyblocks from the company's mini-warehouse to deliver a box of Raisin Bran cereal, or a single apple. Wilson said she didn't see the company thriving in the long-term, but she didn't think the end would come quite so soon.

"I feel like they were so eager to customer please they ended up, kind of, doing themselves in," she said.

Workers were notified in a Telegram chat group with more than 800 members that they could retrieve any personal belongings from their stores on Friday. According to a screenshot viewed by CNN Business, the workers were also told they could take any products from produce, dairy, cheese and meat, or its bakery.

(In December, another competitor in the space operating in New York City folded: 1520.)

Wilson told CNN Business she would consider joining another ultra-fast delivery startup though she specified she likely wouldn't apply for courier roles, citing the physical toll of the job.

Just two weeks ago, Grubhub, the food ordering and delivery platform, touted a new partnership with Buyk. Now, it's distancing itself: "Given their news, the project is on hold until further notice," said a Grubhub spokesperson in a statement to CNN Business.

Other established companies have also looked to partner with emerging ultra-fast delivery firms. Uber, for example, announced a partnership in May with GoPuff, the privately-held startup promising deliveries in 30 minutes or less that is valued at $15 billion. In February, Uber announced a venture with FastAF, a startup offering premium goods like Apple AirPods and Olaplex hair products in 25-minutes or less.

While Uber helped to popularize the model of treating drivers and couriers as independent contractors, many of the ultra-fast delivery startups employ their couriers, which allows for more control over their schedules but also affords workers certain benefits and protections.

In its email to employees concerning the layoffs, Fridge No More provided a phone number to reach the company's cofounders with any questions. When CNN Business called the number, there was an automated voice message: "Due to the current circumstance, if you're calling for the unemployment [employer identification number], the number is...." (Callers can also leave a voicemail.)

Fridge No More did not respond to CNN Business' request for comment.

When attempting to place an order on Buyk Friday morning, the app read: "Hey everyone! Our services are temporarily unavailable. Check back soon!" Meanwhile, doing the same on Fridge No More simply returned: "Sorry we're temporarily closed until further notice."