Ukraine is 'making progress' on the battlefield thanks to skill of soldiers and strategic use of supplied weapons, Defense secretary says 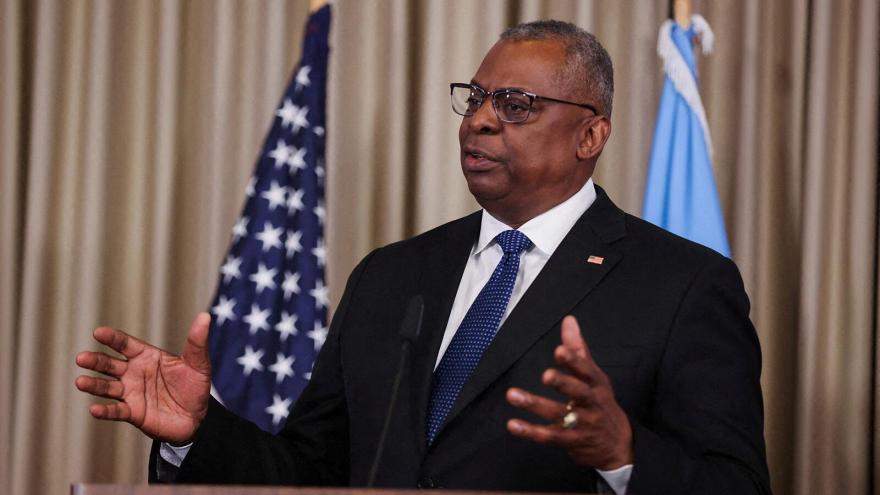 Secretary of Defense Lloyd Austin said he believes Ukraine is "making progress," in the Kherson region of the country as they continue to counter Russia's invasion, adding there has been a "kind of change in the battlefield dynamics."

(CNN) -- Secretary of Defense Lloyd Austin said he believes Ukraine is "making progress," in the Kherson region of the country as they continue to counter Russia's invasion, adding there has been a "kind of change in the battlefield dynamics."

Austin attributed the change to the skill of Ukrainian soldiers and their strategic use of weapons supplied by US and NATO allies, specifically their use of the high mobility air rocket systems, or HIMARS. He made the comments in an exclusive interview with CNN's Fareed Zakaria that aired Sunday on "Fareed Zakaria GPS."

"What we're seeing now is a kind of change in the battlefield dynamics," Austin said. "They've done very, very well in the Kharkiv area and moved to take advantage of opportunities. The fight in the -- the Kherson region's going a bit slower, but they're making progress."

Austin said Ukrainian forces have used "technology like HIMARS" and employed it in the "right way" to "conduct attacks on things like logistical stores and command and control, that's taking away -- taken away significant capability from the Russians."

In doing so, Ukrainians have "changed the dynamics, and it's created an opportunity for the Ukrainians to maneuver," he added.

When asked why the US has not supplied longer-range weapons that Ukrainians have asked for, Austin said he communicates with his Ukrainian counterpart, Minister of Defense Oleksii Reznikov, "routinely," and believes the US has been "very effective in providing them those things that are very, very effective on a battlefield."

ATACMS have a range of about 185 miles. The maximum range of US-provided weapons to Ukraine is around 49 miles.

Austin praised the successes Ukrainians have had on the battlefield and noted they are using the weapons and technology given to them by the US in the "right way."

"It's not just about the equipment that you have. It's about how you employ that equipment, how you synchronize things together to create battlefield effects that then can create opportunities," he said.

Austin said what will happen in Ukraine is "hard to predict," but he said the US will "continue to provide security assistance to the Ukrainians for as long as it takes."

"The Ukrainians have amazed the world in terms of their ability to fight back, their ability to exercise initiative, their commitment to the defense of their democracy," he said. "And that willingness to fight has rallied the international community in an effort to help provide them the security assistance so that they can continue to fight."

Austin said while he does not "see an imminent invasion" of Taiwan by China, he believes Chinese President Xi Jinping used the August 3 visit to the self-governing island by US House Speaker Nancy Pelosi as an opportunity to "begin to try to create a new normal."

Pelosi was the first sitting US House Speaker to visit the island in 25 years. China responded by launching military exercises in the seas and airspace around Taiwan.

"We saw a number of centerline crossings of the Taiwan Strait by their aircraft, and that number has increased over time. We've seen more activity with their surface vessels in the waters in and around Taiwan," Austin said.

China's ruling Communist Party considers Taiwan a part of its territory, despite never having governed it, and has vowed to "reunify" it with the Chinese mainland, by force if necessary.

Austin said he has spoken to his Chinese counterpart, Chinese Minister of National Defense Wei Fenghe, "on the phone and in person" during his time as Secretary of Defense, but the communication channel between the two is "not open" right now.

"We'll do everything we can to continue to signal that we want those channels open, and I would hope that China would begin to lean forward a bit more and work with us," Austin said.

When asked if the US military was prepared to defend Taiwan, Austin said the military is "always prepared to protect our interests and live up to our commitments."

In an interview with CBS' "60 Minutes" that aired last month, President Joe Biden reiterated a previous pledge to defend Taiwan in the event of an invasion, but he specified that "US men and women" would be involved in the effort.

"I think the President was clear in providing his answers as he responded to a hypothetical question. But, again, we continue to work to make sure that we have the right capabilities in the right places to ensure that we help our allies maintain a free and open Indo-Pacific," Austin said.

Under the "One China" policy, the US acknowledges China's position that Taiwan is a part of China but has never officially recognized the Communist Party's claim to the island of 23 million. The US provides Taiwan with defensive weapons but has remained intentionally ambiguous on whether it would intervene militarily in the event of a Chinese attack.

"In accordance with the Taiwan Relations Act, you know, we're committed to helping Taiwan develop the capability to defend itself, and that work has gone on over time," he said.