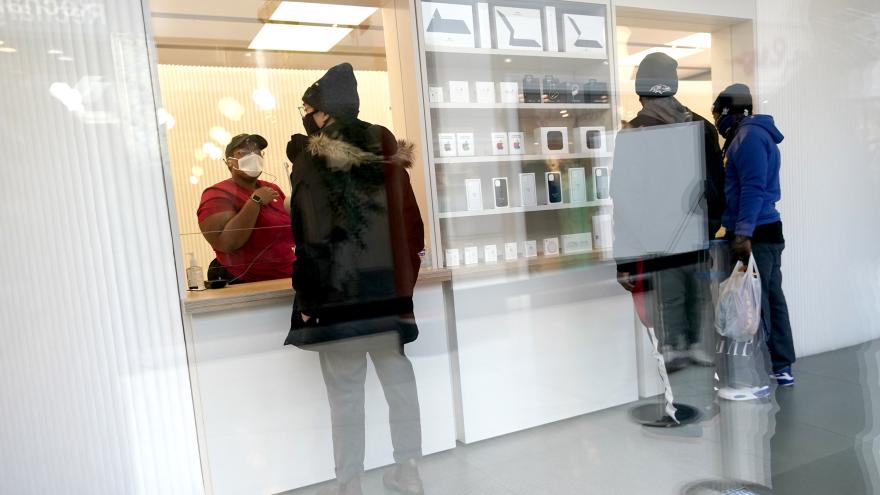 (CNN) -- Apple workers in Towson, Maryland, have voted to form the first-ever labor union at one of the tech giant's US stores.

The landmark union election concluded on Saturday evening with 65 workers voting for unionization and 33 against it, a nearly two-to-one margin in favor of the union, according to a preliminary tally from the National Labor Relations Board.

The victory for union organizers at the Apple store in the Towson Town Center, a mall near Baltimore, comes amid a broader wave of workplace activism that has emerged in the wake of the Covid-19 pandemic.

The US labor market has tipped much more strongly in favor of workers over the past two years. There are now roughly twice as many job openings as there are unemployed people looking for work, leaving employers scrambling to fill jobs. The number of employees being fired or laid off recently reached a record low. And the number of employees quitting jobs, typically because they found better opportunities, remains near recently reached record highs. That has made employees who are dissatisfied with their jobs more willing to demand better working conditions, including through unionization.

Saturday's vote marks a major victory for retail workers at Apple, which has in recent months experienced a wave of employee activism within its corporate ranks — a movement that's come to be known as #AppleToo.

The major issue driving the organizing vote was workers wanting to have a say in the way the store is run, said Christie Pridgen, a technical expert at the store and one of the organizers. Pridgen, 34, said she's worked at the store for more than 8 years.

"Compensation is important, considering the cost of living in general and inflation, but the bigger thing is having a say," she told CNN Business Saturday night after the vote. "That was the most important thing to me."

Pridgen said workers having a say in hours and scheduling and being involved in establishing safety protocols during the pandemic were the big issues.

"We wanted a say in the policies that affect our lives," she said, adding that she wasn't surprised by the outcome of the vote, but was relieved.

"I knew I wasn't alone in being frustrated," she said. As to whether she thought about leaving Apple for another job, said said she felt as if her co-workers are a kind of family.

"I am not ready to leave here because of the connection I have with teammates," she said.

An Apple spokesperson declined to comment on the vote.

"We are fortunate to have incredible retail team members and we deeply value everything they bring to Apple," the company said in a statement ahead of the vote. "We are pleased to offer very strong compensation and benefits for full time and part time employees, including health care, tuition reimbursement, new parental leave, paid family leave, annual stock grants and many other benefits."

The union that won the vote is called the Apple Coalition of Organized Retail Employees, or AppleCORE for short. It was backed by the larger International Association of Machinists, known for its strength of production workers at Boeing as well as many of the employees in the US airline industry.

"I applaud the courage displayed by CORE members at the Apple store in Towson for achieving this historic victory," said IAM International President Robert Martinez. "They made a huge sacrifice for thousands of Apple employees across the nation who had all eyes on this election."

The Apple store vote follows an April union victory at an Amazon distribution center in Staten Island, New York, the first Amazon facility to vote in favor a union. There have also been a string of union victories at Starbucks stores nationwide since late last year.

Still, it is an uphill battle for unions to win organizing votes. Even with all the successful votes at Starbucks stores, the union has won the right to represent only roughly 5,000 of the 235,000 employees at Starbucks' 9,000 US company-owned stores. The Amazon distribution center in Staten Island had about 8,300 workers while the company has more than 1 million US employees overall.

The win at the Apple store in Maryland came after union supporters at an Apple store in Atlanta withdrew their request to hold a vote. The union win at the Staten Island Amazon location is being challenged by the company. And it followed a failed attempt by a different union to represent an Amazon distribution center in Alabama. There has subsequently been a union loss at a nearby Amazon facility, also on Staten Island.

Management often pressures employees to vote against a union, arguing that it will be more difficult to address working condition concerns if a union is in place, or that employees will be paid less and have to pay union dues if they vote to organize. For example, Starbucks CEO Howard Schultz announced a pay hike for most of the company's US employees that will not apply to workers at stores that have voted for a union, saying that potential wage increase would now be subject to negotiation.

Workers can also be worried that a company might close a location that votes for a union while keeping others open. Workers at an Ithaca, New York, Starbucks store claim their location is being closed because of a successful unionizing effort. The company denies the union vote is the reason for the closing plans, but the union has filed an unfair labor practice complaint.

The advantages that management has in defeating unionization efforts has resulted in the percentage of US workers belonging to a union falling to 10.3% in 2021, down from 20.1% in 1983. Nearly half of union members work for some level of government. Overall only 6.1% of private sector employees are union members, including 4.4% of retail employees, mostly at grocery stores.