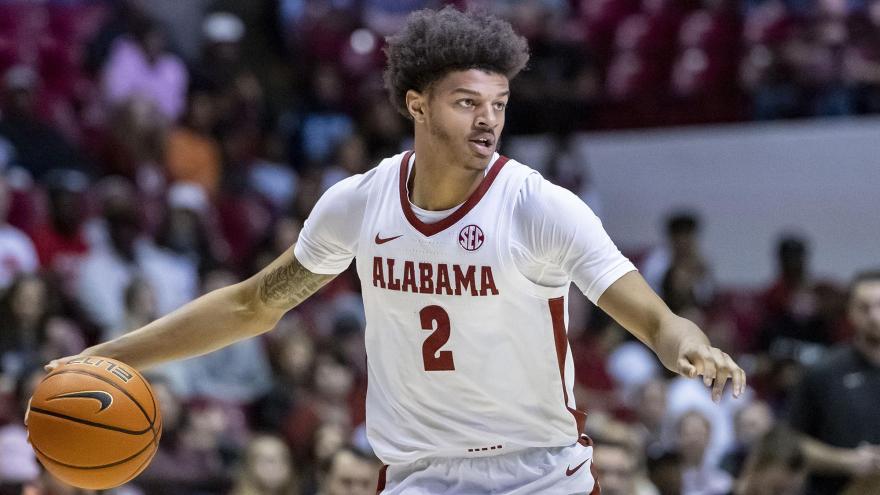 (CNN) -- After University of Alabama basketball player Darius Miles was charged with murder in the death of a 23-year-old mother and removed from the team, the victim's loved ones say she was shot and killed when she declined a man trying to flirt with her.

Miles, 21, and Michael Lynn Davis, 20, were arrested and charged with capital murder in the shooting death of Jamea Jonae Harris near the university campus early Sunday, the Tuscaloosa Violent Crimes Unit said.

The two men made their initial court appearances Monday and are being held without bail. Witnesses said Davis was the shooter and got the weapon from Miles, according to depositions from Tuscaloosa Sheriff's Office Investigator Brenden Culpepper. There is also surveillance video of the shooting, the court document says.

"Darius Miles admitted to providing Michael Davis with the handgun immediately prior to the shooting," Culpepper said in a deposition for Miles' case.

CNN has made attempts to reach Miles' attorney, who said in a statement obtained by CNN affiliate WBRC that Miles and his family are "heartbroken" over Harris' death, but "he maintains his innocence and looks forward to his day in court."

Davis on Monday declined a court-appointed attorney and plans to retain his own lawyer, according to court documents. It is unclear whether Davis has yet hired an attorney.

Victim was shot while in a car

Miles was the only person connected to the University of Alabama involved in the shooting, authorities said. The university's athletics department announced Sunday that he has been kicked off the basketball team.

When police responded to the shooting at around 1:45 a.m. Sunday, they found Harris had been fatally shot while she was in a car less than half a mile from the campus, authorities said.

Harris and her boyfriend had driven to Tuscaloosa from Birmingham to visit her cousin, who is a student at the University of Alabama, Harris' mother, DeCarla Cotton, told CNN.

Harris' boyfriend told Cotton the three of them were getting something to eat after a night out when a man approached Harris and started flirting with her, the mother said.

"He was advancing on her and she declined his attention. He refused to go away," Cotton told CNN. "While they were attempting to leave, one gentleman walked up to the car and started shooting."

Harris' boyfriend shot back and hit one of the suspects, Cotton said. The suspect later went to a local hospital, which helped connect him to the shooting, she added. Investigators have said one of the suspects was hit by the returning gunfire and sustained a non-life-threatening wound.

Tuscaloosa Violent Crimes Unit Capt. Jack Kennedy said the motive of the shooting appeared to be "a minor altercation that these individuals had with the victim as they were out on The Strip," which is a hub of restaurants and businesses near the university's campus.

"She wasn't a troublemaker," Cotton said of her daughter. "She was a hardworking mother who got up every day to take care of her son," Cotton said.

Harris' 5-year-old son is staying with Cotton, the mother said. "I haven't found the words to explain this to him yet," she said.

Miles, who is from Washington, DC, is a junior at the university, according to an archived version of the men's basketball team roster. He was in the midst of playing his third season as a forward for the Alabama Crimson Tide, the archived page shows.

University of Alabama men's basketball head coach Nate Oats said in a news conference Monday that the weekend's events are "really a tragedy all around."

"I just want to start today by offering our deepest condolences to the family and friends of Jamea Jonae Harris, a young woman, daughter and mother who was taken way too soon from a senseless act," he said at the opening of the conference.

The team gathered Sunday night to talk about the shooting and arrest of their teammate, Oats said.

"We're continuing to support each other as we process this and balance school and basketball," he said.

The team will continue practicing in preparation for Tuesday's game against Vanderbilt University, Oats said.

"I wish we weren't having to address this situation, but we've got to pull together as a team at this point and ... really be there for each other," Oats said, adding the players are aware of additional support services available on campus and within the athletics department.

The university has said it is cooperating with the investigation, along with the athletics department.