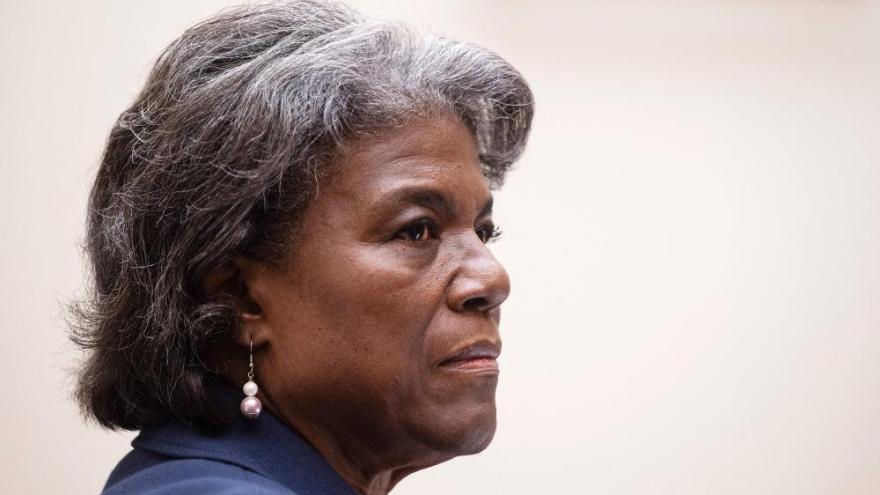 US Ambassador to the United Nations Linda Thomas-Greenfield testifies on Capitol Hill in Washington, DC, in June 2021. Thomas-Greenfield on November 4 condemned North Korea's missile launches and lack of action by the UN Security Council.

(CNN) -- The US Ambassador to the United Nations on Friday condemned both North Korea's missile launches and the lack of action taken by the UN Security Council to address them as "appalling."

In remarks at a UN Security Council meeting on the matter, Linda Thomas-Greenfield said Pyongyang had launched a "staggering" 59 missiles in 2022.

"For a UN Member State to so flagrantly violate the Security Council resolutions, and all that the UN Charter stands for, is appalling," she said.

"Equally appalling is the Council's deafening silence on this issue," Thomas-Greenfield said.

The US envoy noted that "thirteen Council members have joined in condemning the DPRK's unlawful actions since the beginning of the year" and "have joined in voting to impose costs on the DPRK that would impede its unlawful weapons of mass destruction and ballistic missile pursuits, while seeking new avenues to improve humanitarian assistance to the country's people," using the acronym for North Korea's official name: the Democratic People's Republic of Korea.

"The DPRK, however, has enjoyed blanket protection from two members of this Council," Thomas-Greenfield said. Although she did not name names, the accusations were clearly directed at Russia and China.

"These members have bent over backwards to justify the DPRK's repeated violations," she said. "And, in turn, they have enabled the DPRK and made a mockery of this Council."

"You don't get to abandon Security Council responsibilities because the DPRK might sell you weapons to fuel your war of aggression in Ukraine, or because you think they make a good regional buffer to the United States," she said in a swipe at Moscow and Beijing.

A US senior administration official told CNN that Washington "been very clear with China of our concern about the DPRK and its programs and its destabilizing behavior."

"If China says anything or takes any actions that will be very significant," they added.

In her remarks at the Security Council Friday, Thomas-Greenfield that the US has "conveyed to the DPRK our request to engage in talks at all levels of our government."

"Despite a lack of engagement from Pyongyang, we will continue to pursue meaningful dialogue," she said.

According to the senior administration official, the Biden administration has repeatedly tried to engage directly with North Korea, but Pyongyang has "not responded substantively."

The attempts at engagement have been through a variety of means, including private bilateral channels, third parties, and public messaging, the official said.

The official declined to go into further specifics, citing the sensitivity of the communications, nor would they say if messages from the US have been conveyed in recent days in the wake of North Korea's multiple missile launches.

However, they told CNN, "you can expect that we've been, on a very regular basis, making clear our desire for dialogue."

The official said what Pyongyang has done and said "makes clear that they are not interested in diplomacy."

The administration is "very confident" that the messages are making it to North Korean leader Kim Jong Un "for a number of reasons, not least of which is that they're making public reference to why they're refusing to talk to us," the official said.

"This is not something where we're wondering, gee, our message is getting through or are they making it all the way to the top? We're very confident because we've seen Kim Jong Un himself refer to our efforts to seek dialogue and diplomacy," they added.

The official would not say if there is a scenario in which the United States would stop seeking dialogue without preconditions.

"We believe very fundamentally that having dialogue is extremely important, and we need to look for ways in which we can understand and have them tell us what they're looking for, and we can tell them what we're looking for, and see if there are ways to make progress," the official said. "This is ultimately their decision to refuse to start the process."