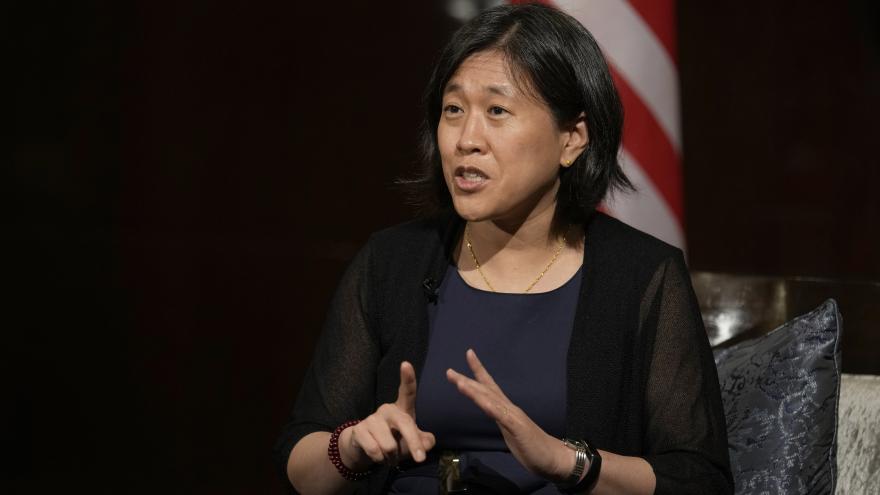 The new discussions will "explore concrete ways to deepen the US-Taiwan trade and investment relationship," the officials said, with the focus on institutionalizing cooperation in supply chain resilience, labor, environment and sustainable development.

A formal announcement will come after "coordination and consultations are made," according to a senior official.

A senior official also told CNN on Friday that Taiwan may send a delegation to participate in the SelectUSA summit in Maryland in June. The summit facilitates overseas business investment into the United States.

Taiwan was excluded from the Indo-Pacific Economic Framework (IPEF), a regional economic plan unveiled by President Joe Biden during his visit to Tokyo earlier this week. The framework is Biden's attempt at engaging a region increasingly coming under the influence of China.

The IPEF isn't a trade agreement in the traditional sense. It includes one "pillar" related to trade, but also incorporates other areas like making supply chains more resilient, promoting clean energy and combating corruption.

"The future of the 21st Century economy is going to be largely written in the Indo-Pacific, our region," Biden said as he launched the plan.

Taiwan had voiced its desireto be part of the framework but was excluded from the launch — a move some analysts believed was likely based on a desire by some members not to stoke tension with China.

"Many countries expressed a desire to downplay the US-China confrontation in the IPEF, and that is the main reason why Taiwan was not invited to attend the launch ceremony," said Roy Lee, a deputy executive director at Taiwan's Chung-hua Institution for Economic Research.

"Some countries pointed out that Taiwan's inclusion would boost[the IPEF's] efficiency, but there were also worries that China would view these countries as choosing a side," he added.

Taiwan plays a crucial role in global supply chains as it is a global leader in the supply of semiconductor chips.

One Taiwanese company in particular — Taiwan Semiconductor Manufacturing Company (TSMC) — is the world's largest contract manufacturer of chips and plays a critical role in powering products designed by tech companies like Apple, Qualcomm and Nvidia.

Worthnearly $500 billion, TSMC is one of Asia's most valuable companies, and accounts for 90% of the world's super-advanced chips.

The self-governing island of 24 million people has been facing growing military aggression from China in recent months. The Communist authorities in Beijing have claimed Asia's 7th largest economy as part of its territory, despite having never ruled over it.

Taiwan has emerged as one of the central issues between China and the United States, and Biden's tour of Asia this month centered around Beijing'sincreasing influence inthe region.

On Monday, Biden said that the United States would intervene militarily if China attempts to take Taiwan by force — in what appeared to be a strong warning to Beijing not to imitate Russia's invasion of Ukraine.

The White House quickly downplayed the comments, saying they didn't reflect a change in US policy. It's the third time in recent months — including during a CNN town hall in October — that Biden has said the United States would protect Taiwan from a Chinese attack, only to have the White House walk back those remarks.

Beijing responded angrily, calling on Washington to be "cautious in words and deeds on the Taiwan issue."

The United States does not have formal diplomatic relations with the authorities in Taipei, but it has continued to retain close unofficial ties by facilitating economic exchanges and supplying Taiwan with defensive weaponry to defend itself against an invasion.

Last Friday, Taiwan's top trade negotiator John Deng held a bilateral meeting with US trade representative Katherine Tai in Thailand, during which they agreed to explore ways to deepen trade relations and meet again in the coming weeks to discuss the path forward, according to a readout from the United States Trade Representative Office.