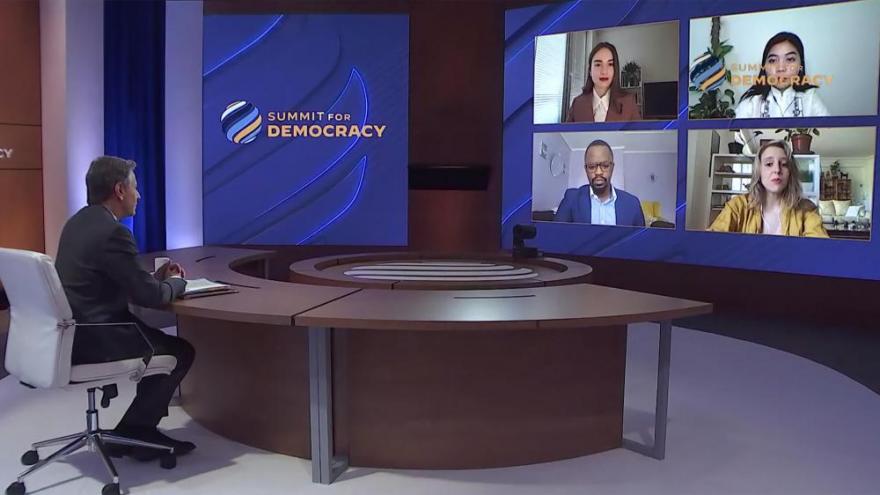 The US will provide new funding to protect reporters targeted because of their work and support independent international journalism, Secretary of State Antony Blinken, pictured here, on December 8, said at the opening of the virtual Summit for Democracy.

(CNN) -- The US will provide new funding to protect reporters targeted because of their work and support independent international journalism, Secretary of State Antony Blinken said Wednesday at the opening of the virtual Summit for Democracy.

The new "liability fund" will support "reporters and news organizations that are targeted with litigation as a result of their reporting," said Blinken, who highlighted the case of Dayanna Monroy, an investigative journalist he said he met in Quito, Ecuador, who was threatened and faces a legal complaint for her work uncovering "a scheme by a former president and health officials to sell body bags to public hospitals at 13 times their price."

"The fund we're launching will support journalists like Dayanna as they defend themselves against such baseless legal efforts," said Blinken.

The Summit for Democracy, a virtual gathering of leaders from government, civil society and the private sector, will focus on combating corruption, defending against authoritarianism and promoting human rights. The event, launched by President Joe Biden to highlight the strengths and values of liberal democracy, has drawn fierce criticism from China and Russia.

"These new efforts will come atop the $236 million dollars President Biden has requested in the 2022 budget to support independent media around the globe -- a more than 40% increase on the amount allotted in 2020," said Blinken, who did not specify the amount of new funding going to the new programs.

The new initiatives come as press freedoms face increased pressure around the world.

Media watchdog Reporters Without Borders said in its most recent Press Freedom Index that journalism "is totally blocked or seriously impeded in 73 countries and constrained in 59 others."

Blinken highlighted how some countries have passed "overly broad ... and vague laws related to the COVID-19 pandemic" that are now being used to target journalists "under the pretext of combatting misinformation."

"I believe that democratic values are very important for our humanity," said Muratov via a State Department translator. "We need to make sure that killings of journalists need to be discovered, and those who are responsible punished. We need to talk about corruption."

Muratov has accused the Russian government of murdering reporters such as journalist Anna Politkovskaya.

"For some reason, we have allowed lies laced with anger and hate to actually spread faster and further than facts," said Ressa, who has spoken out about journalism in the Philippines, charging that news platforms there "are biased against facts."

CORRECTION: An earlier version of this story misstated when Blinken delivered his remarks. He spoke on Wednesday.