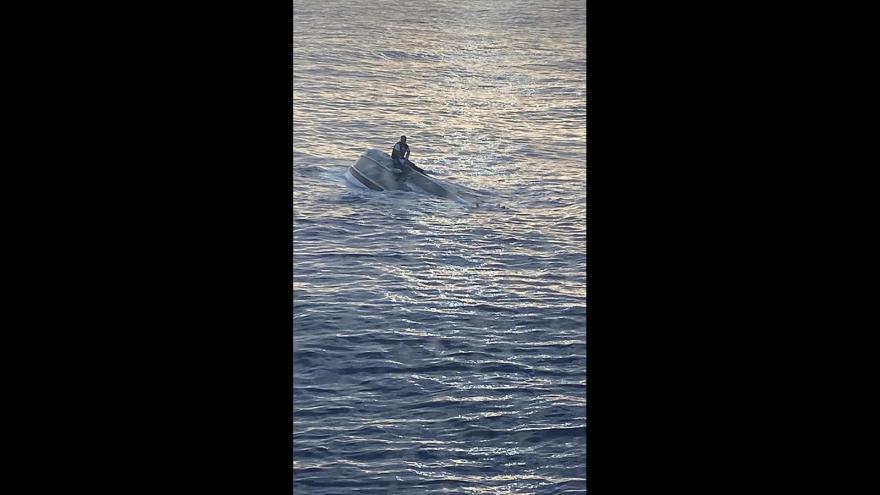 The US Coast Guard said a man was rescued from a capsized boat by a good Samaritan.

(CNN) -- After finding five bodies off Florida's Atlantic coast, the US Coast Guard announced Thursday it officially suspended its search for the remaining 34 people missing after a vessel capsized over the weekend.

The search was officially suspended at sunset, according to Petty Officer Jose Hernandez, a Coast Guard spokesperson. The service said earlier it planned to suspend its search at sunset if no new information regarding possible survivors was reported.

The Coast Guard said it has been searching the waters since Tuesday morning, after receiving a report from a Signet Maritime Corporation tug boat captain saying he had rescued a man clinging to a capsized vessel about 45 miles east of Fort Pierce Inlet.

Coast Guard Capt. Jo-Ann Burdian said a body was recovered Wednesday. The four other bodies were found "within the last 24 hours" in a search area that was about the size of New Jersey, Burdian said Thursday.

Burdian said the Coast Guard does not think it's likely anyone else survived and described the decision to suspend the operation as "complicated." She said crews have saturated the search area "over and over and over again" and said they have flown over the area several times.

The Coast Guard said earlier this week it suspects this was a human smuggling venture because the rescued man told authorities that he left Bimini, in the Bahamas, in a boat with 39 others on Saturday night. The group then encountered severe weather, causing the boat to capsize.

The rescued man told authorities no one on board the vessel was wearing a life jacket, the Coast Guard said. He was in stable condition, and was being questioned by US Homeland Security officials, Burdian said.