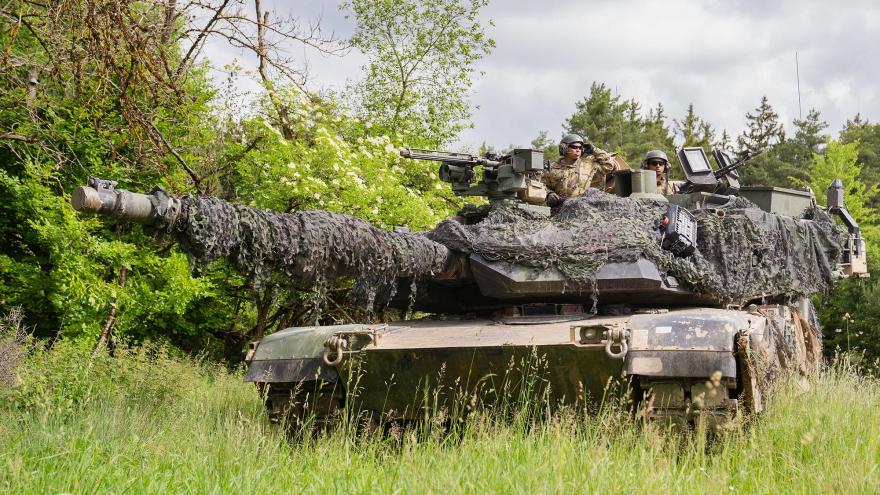 (CNN) -- The US is finalizing plans to send approximately 30 Abrams tanks to Ukraine, two US officials familiar with the deliberations told CNN.

The Biden administration announcement to send the US-made tanks could come as early as this week, CNN reported earlier Tuesday. The timing around the actual delivery of the tanks is still unclear and it normally takes several months to train troops to use the tanks effectively, officials said.

The pending announcement appears to break a diplomatic logjam with Germany about the provision of tanks to Ukraine. German officials had openly stated that they would only send their Leopard 2 tanks to Ukraine if the US sent the M-1 Abrams tank, a system US officials had repeatedly stated was overly complex and difficult to maintain.

The US decision to provide Abrams tanks to Ukraine is an abrupt about-face from its stated position, one that allows Germany to send its tanks and to clear the way for the approval of other European countries to send in more of the German-made Leopard 2 tanks as well.

The German government announced on Wednesday it will send Leopard 2 tanks to Ukraine, following weeks of diplomatic pressure to make the move.

The decision to send the tanks is a landmark moment in the West's support for Kyiv that follows days of intense pressure on Berlin from some of its NATO partners. Germany had indicated to the US last week that it would not send its Leopard tanks unless the US also agreed to send its own M1 Abrams tanks.

The Biden administration has never taken the possibility of shipping American tanks entirely off the table, but US officials said publicly last week that it was not the right time to send the 70-ton M1 Abrams tanks because they are costly and require a significant amount of training to operate.

The tanks, instead, were repeatedly floated as a long-term option -- even as critics said it was the right time, as Ukraine braces for the possibility Russia will mobilize more troops and launch a new offensive.

The decision to send US-made Abrams tanks will rely on an "iterative process" assessing Ukraine's needs, what aid is appropriate for the US to send and technical considerations surrounding operation and maintenance of the tanks, National Security Council Coordinator for Strategic Communications John Kirby said Tuesday evening.

"We have talked about the fact that the Abrams are an incredibly capable system but it's a very expensive system to operate and to maintain," Kirby told CNN's Anderson Cooper on "AC360."

"It has a jet engine -- it doesn't mean that the Ukrainians can't learn it, it just means that we have to factor all that stuff in with any system that we're going to potentially provide to them," he added.

Kirby acknowledged that the complexity of the Abrams systems could play a role in the US' decision to share tanks with Ukraine, adding that "with any advanced system, you have to factor in things like supply chain and maintenance time."

Sky News Arabia was first to report the news that the US was considering sending the tanks.

Ukraine's President Volodymyr Zelensky has consistently asked Western allies for modern tanks as his country prepares braces for an expected major Russian counteroffensive in the spring.

The UK has already announced it will send 12 of their Challenger 2 tanks to Ukraine, crossing what had previously appeared to be a red line for the US and its European allies. There are believed be around 2,000 in Europe and Poland on Tuesday formally asked Berlin to approve a transfer of some its Leopards to Ukraine.

Any announcement would be a long-term contribution of Abrams, meaning the Ukrainians will not have them on the ground anytime soon because of the training and getting the sustainment framework established, a former defense official with knowledge of the deliberations told CNN. For now, the pending announcement by the US is more to make Germany feel more comfortable in providing their own tanks.

"These are not going to be tanks that are going to be on the ground next week or next month," the former official said.

Given the last week's announcement of a $2.5 billion drawdown of US stocks to send to Ukraine, an announcement is unlikely to be another drawdown. Instead, the provision of tanks to Ukraine could come from a new contract under the Ukraine Security Assistance Initiative (USAI) or a refurbishment of M-1 Abrams tanks from another country such as Poland, which recently closed a deal to buy more Abrams and has been vocal in its insistence on sending tank to Ukraine.

Either scenario gives the US more time and space to acquire, train and equip Ukraine with the tanks which are complex to operate. Ukrainian forces are already training on a number of new and advanced systems. That list includes training on Patriot missiles, UK-made Challenger 2 tanks, M109 howitzers and more, as well as the combined arms training that recently began in Germany.

Tanks represent the most powerful direct offensive weapon provided to Ukraine so far, a heavily armed system designed to meet the enemy head on instead of firing from a distance. If used properly with the necessary training, they could allow Ukraine to retake territory against Russian forces that have had time to dig defensive lines. The US has begun supplying refurbished Soviet-era T-72 tanks, but modern western tanks are a generation ahead in terms of their ability to target enemy positions.

Pentagon and White House officials have denied that the risk of escalation with Russia has had anything to do with the US decision to delay a decision on sending the tanks. Rather, the concern has been how difficult it would be for Ukrainian forces to operate and maintain the Abrams tank and whether it would be effective on the battlefield in Ukraine.

"It is a very, very different system than the generation of tank they're currently operating," said retired Army Maj. Gen. Patrick Donahoe, former commander of the Army's Maneuver Center of Excellence at Fort Benning, Georgia told CNN last week. "So we would have to go through a sizeable training program with their Army. It would not be something that you can just, 'Hey we field Abrams to you today and you're fighting with it tomorrow.' That's not even in the realm of the possible."

This headline and story have been updated with additional developments.