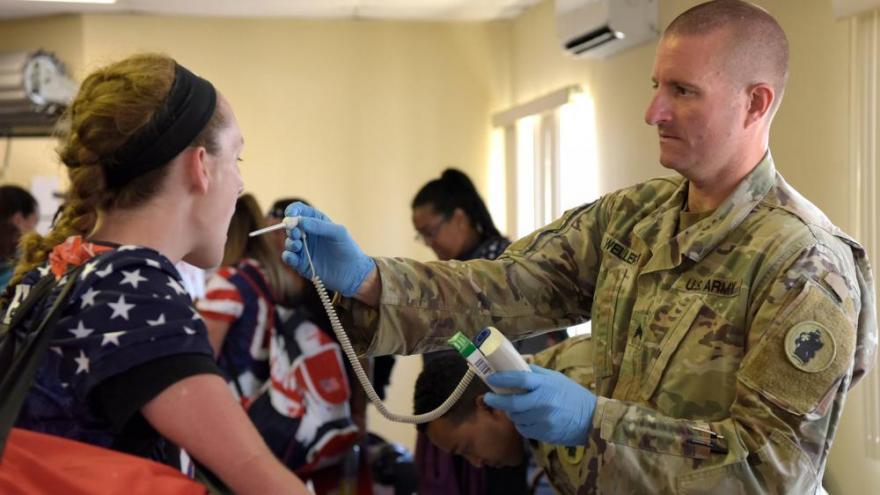 The United States military flew a team of US women football players back home who were stranded in Honduras, after the country closed its borders to curb the spread of the coronavirus.

(CNN) -- The United States military flew a team of US women football players back home who were stranded in Honduras, after the country closed its borders to curb the spread of the coronavirus.

The American Football Events team had been in Honduras to compete in the Americas Women's Bowl, which was canceled midway through competition due to concerns over the pandemic.

Hours before the team planned to head home, Honduras announced it would be closing its borders for seven days, beginning 11:59 pm, on March 15.

"We have contacted the US Embassy and they have been great to ease our minds, unfortunately the US Government does not allot funds in order to get people out of a country," the team posted Monday on its Facebook page.

The team of 55 members said they were safe and had quarantined themselves at their hotel in Tegucigalpa, Honduras.

On Friday, a US Air Force C-17 flew about half of the team out of Honduras' Soto Cano Air Base to the US, according to a statement from US Southern Command.

Later that day, a US Air Force C-130 transported 89 US citizens, including the remaining members of the team -- as well as other US citizens who were stuck in Honduras -- to Joint Base Charleston in South Carolina.

Twenty-five members left on the first flight, while the remaining 30 players, coaches and staff returned on the second flight, the team said on Facebook. CNN has reached out to the American Football Events for comment.

The two Air Force missions were in support of the US State Department's efforts to help Americans return home from Honduras.

While the team and other US citizens have been fortunate to return home, a large number of Americans are still struggling to get back to the US.

"Word on the island from resort owners is that there are maybe as many as 1,000 US citizens on Roatan," Fred Warkentine, an emergency medicine physician from Kentucky who has been stranded with family on the island, told CNN Saturday.

He also said that martial law has been enacted for the entire country.

The US Embassy in Tegucigalpa is providing letters for stranded Americans to transit to the airport now that Honduras is on lockdown.

However, Nela Ebanks told CNN Saturday that they don't know when the planes are arriving and "when you call those numbers, there is no answer at all."

Warkentine said he and his family's original flight on Delta out of the country on Saturday was rescheduled, and then canceled without any alternative flight offered.

"US embassy has been zero help, they have stated we are on our own," he told CNN earlier this week. On Friday, Warkentine said there had been "little movement."

"I tried to charter A 6 seater King air to come pick my family up and the Honduran government denied them a landing permit," he said in a Twitter message to CNN. "US embassy & state department have been no help."

He said that US Reps. Thomas Massie and John Yarmuth from Kentucky have reached out, but "haven't had much luck" with the State Department.

"I have to say I feel like the federal government has abandoned me and the US carriers that brought me here have betrayed my trust," Warkentine said.

Social distancing doesn't have to doom your weekends. We have ideas

Olympics should be postponed, says CEO of USA Swimming