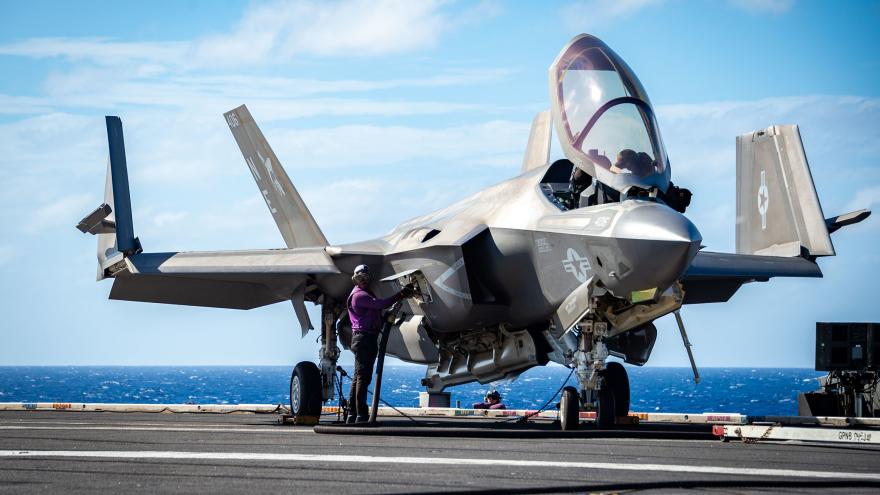 (CNN) -- The United States Navy is trying to retrieve its most advanced fighter jet from the depths of the South China Sea, an extremely complex operation that analysts say will be closely monitored by Beijing.

The F-35C, a single-engine stealth fighter and the newest jet in the US Navy fleet, crash-landed on the aircraft carrier USS Carl Vinson during routine operations on Monday, the Navy said.

The $100 million warplane impacted the flight deck of the 100,000-ton aircraft carrier and then fell into the sea as its pilot ejected, Navy officials said. The pilot and six sailors aboard the Vinson were injured.

While damage to the Vinson was only superficial, and it and the carrier's air wing have resumed normal operations, the Navy faces the daunting task of attempting to pull the F-35 off the ocean floor in some of the most contested waters on the planet.

The Navy is giving scant details on its recovery plans for the F-35C, the first of which only became operational in 2019.

"The US Navy is making recovery operations arrangements for the F-35C aircraft involved in the mishap aboard USS Carl Vinson" is all a spokesman for the US 7th Fleet, Lt. Nicholas Lingo, would tell CNN on Wednesday.

Though the Navy has not revealed where in the South China Sea the crash occurred, Beijing claims almost all of the 1.3 million square mile (3.3 million square kilometer) waterway as its territory and has bolstered its claims by building up and militarizing reefs and islands there.

The US disputes those Chinese territorial claims and uses deployments like the one the Vinson was on to push its case for a "free and open Indo-Pacific."

There has been no official Chinese comment on the crash, with state media reporting it only citing "foreign media."

But China will almost certainly want to get a look at the lost F-35, analysts said.

"China will try to locate and survey it thoroughly using submarines and one of its deep diving submersibles," said Carl Schuster, a former director of operations at the US Pacific Command's Joint Intelligence Center in Hawaii.

Schuster, a former US Navy captain, said it's possible China could make a claim for the salvage rights based on its territorial claims in the South China Sea.

"Salvaging the plane with commercial and coast guard assets will enable Beijing to claim it is recovering a potential environmental hazard or foreign military equipment from its territorial waters," Schuster said.

But such an operation would present political risks, said Collin Koh, research fellow at the S. Rajaratnam School of International Studies in Singapore.

"To overtly go about doing this may risk worsening tensions with the US. I don't believe Beijing has stomach for that," he said.

"However, we can expect the Chinese to shadow, hang around and keep tabs on any such American salvage and recovery operation," Koh said.

Schuster said the US Navy will likely keep some presence in the area where the wreckage is believed to be in an operation that could take months, depending upon how deep under the South China Sea the F-35 is.

US salvage vessels are 10 to 15 days transit time to the site, Schuster said, and recovery once there could take up to 120 days.

Asked whether the US could just destroy the wreckage with a torpedo or an explosive charge, analysts said that was unlikely.

"My question is whether you truly leave behind nothing of potentially consequential intelligence bonanza amongst the scattered smithereens on the seabed -- which any interested party with the capability may still retrieve after all?" Koh said.

This US Navy recovery effort will mark the third time a country flying the F-35 has tried to pull one from the depths.

Last November, a British F-35B crashed on takeoff from the deck of its aircraft carrier HMS Queen Elizabeth into the Mediterranean Sea. Britain's Defense Ministry confirmed to news outlets in early January that it had been recovered in December amid worries the sunken aircraft could have been a target for Russian intelligence.

And after a Japanese F-35A crashed into the Pacific in 2019, worries emerged that it could be a target for Russian and Chinese intelligence.

But only small pieces of the Japanese aircraft were recovered by Japan as that plane is thought to have hit the water at full speed.

In the case of the Mediterranean crash and this week's mishap, the planes were moving more slowly, so more of the wreckage is be expected to be found.