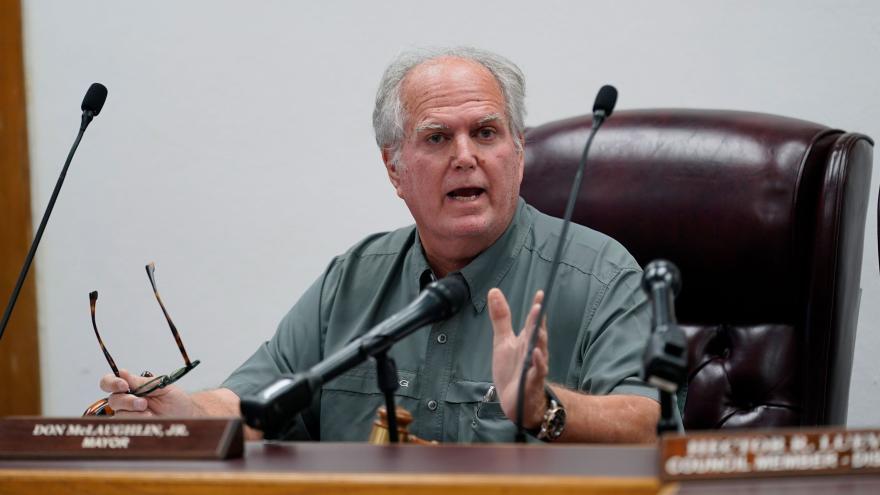 (CNN) -- On May 25, the day after the Uvalde school massacre, state and local leaders gathered at a news conference and voiced their support for the community, vowing to learn more about the circumstances that led to the killings of 19 children and two teachers.

Yet in the weeks since, a cascade of shifting narratives and updated timelines over what transpired during the shooting has now left one city official who was at that news conference airing his grievances publicly, accusing agencies of stonewalling and leaking information about others to minimize their own mistakes.

"I'm just as frustrated -- maybe not as frustrated as the families that have lost their loved ones -- but it pisses me off that I can't give you answers or can't get you answers," Uvalde Mayor Don McLaughlin told residents at a city council meeting Tuesday.

With families demanding answers over how police were slow to intervene as 19 children and two teachers were killed in two connected classrooms at Robb Elementary, the leaking of select information from authorities while demonstrating a general lack of transparency "continues to create chaos in our community and keeps the whole truth from coming out," he said.

Officers from at least eight law enforcement agencies were in the hallway outside the classrooms, the mayor said, and accused the director of the Texas Department of Public Safety, Col. Steven McCraw, of trying to direct attention away from the response by the department and its Texas Ranger Division.

"Col. McCraw has continued to -- whether you want to call it -- lie, leak, mislead or misstate information in order to distance his own troopers and Rangers from the response. Every briefing he leaves out the number of his own officers and Rangers that were on-scene that day," McLaughlin said.

Earlier Tuesday, McCraw testified before a Texas Senate committee that the response from law enforcement was an "abject failure," laying the blame at the feet of Uvalde school district police chief Pedro "Pete" Arredondo, who McCraw and others have identified as the on-scene commander.

Meanwhile, the mayor on Tuesday slammed leaks from unnamed DPS sources in the week following the shooting that were critical of local or school district law enforcement, including reports that they were not cooperating with investigators.

"Col. McCraw has an agenda, and it's not to present a full report and to give factual answers to the families of this community," he said. "What matters to Uvalde is that these brokenhearted families and this grieving community get a full investigation and an accurate report of what happened that day. The petty infighting, the clickbait headlines and the politically motivated scapegoating is not helping anyone. It is dividing a community and further frustrating grieving families."

McLaughlin was adamant to residents that he has no desire to ever pursue elected office again and is "not covering up for anybody," saying all responding agencies should be held accountable.

CNN has reached out to the Texas Department of Public Safety for comment.

McLaughlin has criticized the lack of transparency from investigators before, saying at a city council meeting on June 7, "We had some missteps with the DPS releasing some facts or different things, but that wasn't the Rangers who were leading the investigation. I'm not blaming anybody," he said.

"We were told one thing one day, and the next day the narrative changed. You were told for a week that a teacher propped the door open with a rock, and at the end of the week that story was gone too. That's the missteps I'm talking about," he added.

Hours before Tuesday's council meeting, McLaughlin initially announced he would not be commenting on the investigation on request from Uvalde County District Attorney Christina Mitchell Busbee, and that the "premature release" of any material relating to the investigation "is a disservice to families who lost children or parents because the true facts need to come out once all investigations/reviews, which the City expects will be thorough and fair, are complete."

Mayor: 'We are not going to hold back anymore'

Tuesday's developments came after reporting from CNN, the Texas Tribune and the Austin American-Statesman previewed some of the DPS timeline and revealed further flaws in the police response.

Details of the first moments of the massacre include that 11 officers were inside the building within three minutes of the gunman opening fire. Rifles and ballistic shields were available shortly after, reports revealed.

But 77 minutes passed from the time the gunman started shooting to when a tactical response team entered the classroom and killed him, according to a timeline of events from DPS. Authorities said they believed the classroom doors were locked and worked to locate a key, but security footage of officers testing the doors has yet to be found, according to the reports.

Arredondo previously told The Texas Tribune he didn't consider himself the incident commander and left his police radio and campus radio outside the school because he thought carrying them would slow him down.

Citing a DPS assessment, McCraw told the state Senate committee Tuesday that Uvalde school police officers' radios would not have worked inside the school building due to a weaker signal. Border Patrol agents had the only portable radios that could have worked, he said, but when Border Patrol tried to patch their signals together with local law enforcements' devices, their radios didn't work either.

Arredondo, elected to the city council this year and remaining out of the public eye since the shooting, testified behind closed doors to a Texas House committee Tuesday. At the Uvalde meeting Tuesday night, he was unanimously denied by fellow council members a leave of absence from future meetings.

To gain a fuller picture of law enforcement response to the shooting, McLaughlin has requested bodycam footage from every law enforcement agency that was present that day, he said, but has not received any.

"I have no power," he said. "I have to answer to a bunch of bureaucrats that don't do their jobs, and that's why I'm calling them out today."

McLaughlin said he was meant to receive a daily briefing from authorities over the investigation since its onset, but has not had any provided. At other agencies' requests, the few updates received by the city were not released publicly in deference to a formal investigation, McLaughlin said, yet he slammed officials having public hearings "and not share a damn thing with this city."

"The gloves are off. As we know it, we will share it. We are not going to hold back anymore."

CNN has reached out to the district attorney's office, the chair of the Texas House investigating committee and the San Antonio office of the FBI for further comment.

McLaughlin also reiterated Tuesday that, in consultation with the school superintendent, Robb Elementary would be demolished.

"You could never ask a child to go back or a teacher to go back to that school. Ever," he said.