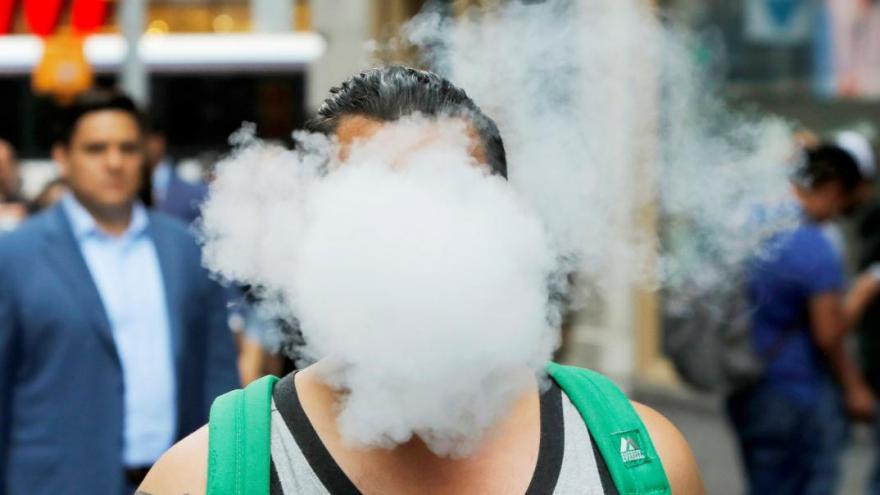 **This image is for use with this specific article only** New York and Massachusetts officials are grappling with the economic effects of the vaping ban this week, facing lawsuits from local vape shop owners who say the ban will close their stores.

(CNN) -- New York and Massachusetts officials are grappling with the economic effects of the vaping ban this week, facing lawsuits from local vape shop owners who say the ban will close their stores.

Vape store owners in both states filed lawsuits requesting preliminary injunctions to put a pause on the statewide bans that halted sales of vaping products.

In September, New York became the first state to implement a ban on the sale of flavored electronic cigarettes and nicotine e-liquids, and later expanded that ban to menthol-flavored products.

Store owners in the state won a small victory against that ban, however, when a New York appellate court issued a temporary restraining order Thursday. A hearing to address the preliminary injunction of the ban will be heard by a judge in New York Supreme Court on October 18, but the ban is on hold at least until a judge rules on the litigation.

"It is undeniable that the vaping industry is using flavored e-cigarettes to get young people hooked on potentially dangerous and deadly products. While the court's ruling temporarily delays our scheduled enforcement of this ban, it will not deter us from using every tool at our disposal to address this crisis. Make no mistake: this is a public health emergency that demands immediate action to help ensure the well-being of our children, and we're confident that once the court hears our argument they will agree," New York State Health Commissioner Dr. Howard Zucker said in a statement about the pending litigation.

Gov. Andrew Cuomo, a Democrat, wrote an op-ed in the New York Daily News speaking against the dangers of flavored vaping products among youth and recently signed legislation to raise the age to purchase tobacco and e-cigarette products from 18 to 21.

In Massachusetts, Gov. Charles Baker, a Republican, declared a public health emergency to ban all online and retail sale of nicotine, flavored, non-flavored and marijuana vaping products to consumers in the state for four months.

A federal judge in Massachusetts heard arguments Friday in consideration of a temporary restraining order on the vaping ban. A group of vape store owners submitted a petition for a preliminary injunction on the four-month product ban, claiming irreparable harm to their businesses and customers.

US District Court Judge Indira Talwani ordered an evidentiary hearing to rule on the preliminary injunction motion for October 15. In the meantime, Talwani ruled Friday against the temporary restraining order.

The vape store owners claim that the ban will cause them to lose on average, $4,000 to $5,000 per week, per store, and force layoffs workers and eventually close their shops. In addition, the vape store owners said the statewide ban will force their customers to return to smoking cigarettes or obtain unregulated products.

Since the litigation was filed, the governor's administration released an update to the ban that says sellers can still sell products to out-of-state consumers via the internet.

Rourke called the updated policy "illusory" because the ban still prohibits products from coming into Massachusetts, so he says sellers won't be able to maintain inventory or fill orders.

Baker's office on Friday acknowledged the difficulty for businesses but also noted that the CDC had reported hundreds more of confirmed cases of vape-related illnesses since the governor declared the public health emergency.

"The Baker-Polito Administration will continue working with medical experts and federal and state officials to better understand why vaping is causing lung-related illnesses and consider all options as next steps," the statement read. "Understanding the temporary ban has been difficult for some businesses, this order provides clarification based on feedback received from industry stakeholders and local boards of health, and DPH will continue to offer guidance if necessary."

During the temporary ban, Baker announced that the administration will "work with medical experts, state and federal officials to better understand vaping illnesses and work on additional steps to address this public health crisis. This could include legislation and regulations," he said in a previous statement.

Other states are considering prohibiting the sale of vaping products.

The US Centers for Disease Control and Prevention confirmed 1,080 probable cases of lung injury associated with e-cigarette use in 48 states and the US Virgin Islands as of October 1.

As of Friday, 21 deaths have been identified nationwide as part of the multistate outbreak of lung injury associated with vaping: two in California, two in Kansas, two in Oregon, and one each from Alabama, Connecticut, Delaware, Florida, Georgia, Illinois, Indiana, Michigan, Minnesota, Mississippi, Missouri, Nebraska, New Jersey, Pennsylvania and Virginia.