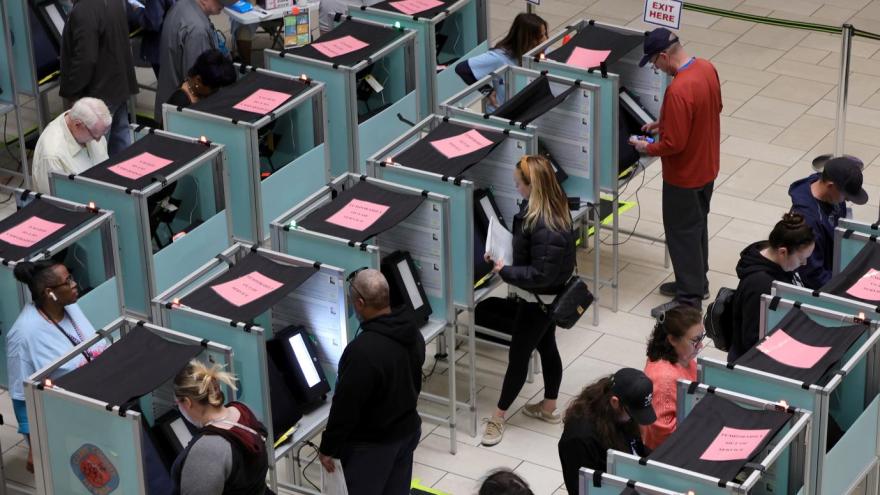 Voters in several states have approved progressive measures that could not get through a Democratic-led Congress or Republican-dominated statehouses. People are pictured here voting in Las Vegas on November 8.

(CNN) -- Voters in several states have approved progressive measures that could not get through a Democratic-led Congress or Republican-dominated statehouses.

More low-income South Dakota residents will have access to Medicaid, and Arizona residents with medical debt will get more protections. Minimum wage workers in Nebraska will get a boost in pay.

Here's a sampling of the ballot measures:

South Dakota will expand Medicaid in 2023

South Dakota voters voted to broaden Medicaid to roughly 42,500 low-income residents starting in mid-2023. The measure passed 56% to 44%, according to South Dakota Secretary of State data.

"South Dakotans know their families and neighbors deserve health care without going into debt or avoiding check-ups, procedures, and medication they need," said Kelly Hall, executive director of The Fairness Project, which backed the measure.

It's the seventh successful effort to expand Medicaid in Republican-led states, which began with the approval of Maine voters in 2017. Ballot initiatives have also passed in Missouri, Oklahoma, Idaho, Nebraska and Utah in recent years.

More than 60 organizations -- including the South Dakota Farmers Union, the Greater Sioux Falls Chamber of Commerce and multiple health care and religious groups -- endorsed Amendment D. It will open up coverage to adults making less than roughly $19,000 a year.

Currently, childless adults are not eligible for Medicaid in South Dakota, and parents must have very low incomes to qualify -- about $1,000 a month for a family of four.

By expanding Medicaid, South Dakota is expected to receive an additional $328 million in federal funds the first year and generate 4,000 new jobs, according to Zach Marcus, campaign manager for South Dakotans Decide Healthcare, which advocated for the ballot measure. The state's Legislative Research Council found last year that expansion would save South Dakota $162.5 million over five years.

Many Republican officials opposed the measure, citing its potential future costs. States are responsible for picking up 10% of the health care tab of the expansion enrollees.

South Dakota Gov. Kristi Noem, a Republican, did not support the initiative, though she has said she will carry it out if voters approve it. An expansion bill failed in a state Senate vote earlier this year.

Until the vote, South Dakota was one of 12 states that had opted not to expand Medicaid. The only remaining states where citizen-led ballot initiatives could be possible are Florida and Wyoming, Hall said.

The minimum wage will rise in Nebraska

Nebraska voters opted to raise the state's minimum wage to $15 an hour by 2026, up from the current $9 an hour. The vote was 58% to 42% in favor, according to Nebraska Secretary of State data.

It is expected to benefit about 150,000 workers, according to the National Employment Law Project and the Economic Policy Institute, which are both left-leaning groups. Some 75% of the workers are over the age of 20.

The measure will provide these workers with an additional $2,100 in pay, said Kate Wolfe, campaign manager of Raise the Wage Nebraska. More than 25 organizations and lawmakers are in the coalition that supported Initiative 433, which was backed by The Fairness Project.

"Initiative 433 passed tonight because Nebraskans understand that raising the minimum wage is about respecting and rewarding hard work," Wolfe said.

Opponents, however, said that the initiative would hurt businesses in the state and reduce employment opportunities for youth.

"The proposed increase in the initiative is a 66.7% increase over four years," Bud Synhorst, CEO of the Lincoln Independent Business Association, wrote in a local business publication last month. "That is a radical increase that will be felt across the economy."

In Nevada, some 54% of voters had cast ballots supporting a state constitutional amendment to increase the minimum wage to $12 an hour by 2024, as of Wednesday afternoon, according to Nevada Secretary of State data. The measure would also remove an existing provision setting different rates for the minimum wage based on whether the employer offers certain health benefits.

Some 46% of voters were opposed to the measure, as of Wednesday evening.

CNN projected on Friday that the amendment will pass.

The state minimum wage is already set to rise to $12 an hour for workers who don't receive certain health care benefits and $11 an hour for those who do, in 2024.

Supporters of the initiative, Question 2 on the ballot, said that workers should have a constitutional guarantee of a $12 hourly minimum wage, preventing lawmakers from reducing it in the future. Opponents argued the change wasn't necessary because the state legislature already has the authority to increase the minimum wage.

Proposition 209 passed by a 72% to 28% vote, according to Arizona Secretary of State data. It will cap the interest rate on medical debt at 3% and limit wage garnishment for medical debt to a maximum of 30% of earnings.

It will also increase the value of primary residences and cars that would be protected from medical debt collectors to $400,000 and $15,000, respectively, up from $250,000 and $6,000, said Rodd McLeod, spokesperson for Healthcare Rising Arizona, which supported the measure that is also backed by The Fairness Project.

The measure will not forgive any medical debt, McLeod said.

Opponents argued the initiative would hurt consumers. It will make it harder for Arizonans to obtain credit and for businesses in the state to collect on debt, as well as increase interest rates on consumer debt, according to Protect Our Arizona, which had hoped to defeat the measure.

California may not tax the rich

Meanwhile, California's Proposition 30, which would add a surtax of 1.75% on people making more than $2 million a year, was on its way to failure, 59% to 41%, as of Wednesday evening, according to California Secretary of State data. CNN is not yet projecting a winner.

Most of the funds would have gone to promote zero-emission vehicles and wildfire prevention and control.

The measure was backed largely by Lyft, which, like other ride-share companies, is subject to another state rule requiring that it use mostly zero-emission vehicles by 2030. Opponents, including the state Republican Party, said the ballot measure was an attempt by Lyft to get taxpayers to foot the bill for the company.

Notably, Democratic Gov. Gavin Newsom also opposed the measure, appearing in an ad to defeat it.

"Prop 30 is being advertised as a climate initiative, but in reality it was devised by a single corporation to funnel state income taxes to benefit their company," he said in the ad.

Supporters, which include environmental groups, public interest organizations, unions and a bevy of Democratic officials, said the measure was needed to address climate change in the state. It would generate roughly $100 billion over the next 20-plus years, they said.