Democratic pick up in Pennsylvania boosts their hopes of holding Senate 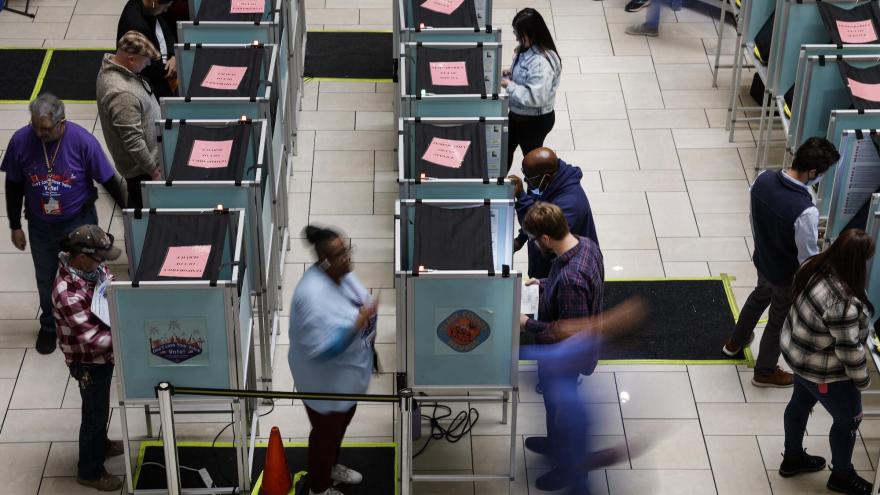 Voters stand in voting booths as they fill out their ballots at a polling center at the Meadows Mall on November 8, in Las Vegas.

(CNN) -- Democrats will pick up a GOP-held Senate seat in Pennsylvania in a huge boost to their hopes of clinging to the chamber, while the red wave that Republicans hoped for has yet to materialize in the House.

Democratic nominee John Fetterman's victory over Republican Mehmet Oz means Democrats have some slight breathing room in their bid to keep control of the 50-50 chamber as counting goes on in other key races in Arizona, Nevada, Georgia and Wisconsin.

Republicans went into the night needing a net gain of one seat in the chamber to take control. They must now hold on to Wisconsin and win two out of three Democrat-held seats in Arizona, Nevada and Georgia to win the majority.

The Democratic win in Pennsylvania -- the rare swing state where President Joe Biden hit the trail this fall -- is also a rebuke of former President Donald Trump, who had endorsed Oz ahead of the primary and also appeared in the commonwealth in the final weekend of the campaign.

Democrats also fell short in two Senate states that had proven surprisingly competitive heading into Election Day. Republicans will hold onto North Carolina and Ohio, CNN projects, denying Democrats opportunities to pick up seats that could have mitigated any future losses.

Republicans had hoped to sweep a trio of Virginia districts on their way to a landslide. They will pick up one in a bellwether district with Republican Jen Kiggans' defeat of Democratic Rep. Elaine Luria, the only member of the select committee investigating the January 6, 2021, insurrection who was facing a competitive general election.

Luria had put the fight to save American democracy at the center of her closing message but she fell short in a district that got slightly better for Republicans in redistricting. The race was among the most closely watched in the country -- viewed as an early indicator of Republican strength on Tuesday night.

But in another key Virginia district, Democratic Rep. Abigail Spanberger will hold on to her seat, CNN projects, in a district that became bluer in redistricting. And in Michigan, Rep. Elissa Slotkin, another Democrat who came to the House in 2018's blue wave, will win another term, CNN projected early Wednesday.

Elsewhere in the House, the GOP has made slower-than-expected gains, while Democrats have also picked up several seats. New Jersey Republican Tom Kean Jr., the son of a popular former governor, will defeat Democratic Rep. Tom Malinowski in a seat that got worse for Democrats, while Democrats will knock off GOP Rep. Steve Chabot, a perennial target, in an Ohio district that became much more favorable to them.

Some of the most aggressive deniers of the 2020 election results will lose their 2022 gubernatorial races, CNN projects.

That includes Pennsylvania's Doug Mastriano, who will fall to rising star Democrat Josh Shapiro, and Michigan's Tudor Dixon, who falsely claimed Trump won Michigan in 2020 and will fall to Democratic Gov. Gretchen Whitmer.

The fate of several Trump-backed candidates who echoed his lies about the 2020 presidential election was still unclear as ballots were being counted in Arizona and Nevada, but Arizona gubernatorial nominee Kari Lake had already raised unfounded doubts about the vote -- in a clear echo of some conservatives' repeated attempts to cast doubt on Maricopa's results in 2020.

Several secretary of state candidates -- including Republican Rayla Campbell of Massachusetts, Kim Crockett of Minnesota, Audrey Trujillo of New Mexico, H. Brooke Paige of Vermont and Kristina Karamo of Michigan -- all lost their bids. Before the election, CNN tracked at least a dozen Republican nominees for secretary of state who denied the legitimacy of the 2020 election.

In Georgia, Republican Gov. Brian Kemp will defeat Democrat Stacey Abrams, CNN projects, in their rematch. Kemp had been targeted by Trump during the primary because he refused to overturn the 2020 presidential results. But Kemp largely ignored those attacks and ran on his record as a conservative who had helped the state's economy recover after the Covid-19 pandemic. His strategy may offer a template for other Republicans who have crossed Trump.

In Florida, two early calls underscored GOP strength in the state. Sen. Marco Rubio will be reelected, CNN projects, defeating Democratic Rep. Val Demings. And Gov. Ron DeSantis, a potential challenger to ex-President Donald Trump in the Republican presidential primary in 2024, will win reelection in a victory that will supercharge his national ambitions.

And in Alabama, Republican Katie Britt, who was backed by Trump, will easily win the seat being vacated by retiring GOP Sen. Richard Shelby, becoming the first elected female senator from the state. In another history-making race, CNN projects that Arkansas Republican Sarah Huckabee Sanders, Trump's former White House press secretary, will become the state's first female governor, a post that was once held by her father, former GOP presidential candidate Mike Huckabee.

History was also made in blue states. In Massachusetts, Maura Healey will become the state's first elected female governor and the nation's first out lesbian governor, CNN projects. And Democrat Wes Moore will serve as Maryland's first Black governor.

Early exit polls revealed a nation in the grip of economic pessimism. Roughly three-quarters of voters felt negatively about the economy with about 4 in 10 deeming it downright poor, according to the preliminary national results of the exit poll conducted for CNN and other news networks by Edison Research. A third of the electorate said inflation was the most important issue to their vote while about 27% cited abortion -- the issue Democrats hoped could give them a boost after the Supreme Court overturned Roe v. Wade.

Republicans have already promised to launch investigations into the administration and cripple its agenda if they win the House majority, and many of their nominees have echoed Trump's election falsehoods, leading to Biden's repeated warnings about threats to democracy.

Appearing in Ohio on Monday night for Vance, the former president said he'd be making a big announcement at his Mar-a-Lago resort on November 15. CNN had previously reported his aides were eyeing the third week of November for a campaign launch -- timing that would allow Trump to take credit for GOP successes in the midterms.

Ahead of a potential rematch with Trump, Biden's dragging approval ratings had made him an unwelcome presence on the campaign trail in swing states. He spent election eve rallying in Maryland for Moore and in New York several days earlier for Democratic Gov. Kathy Hochul.

A divided government in Washington could allow Biden to wield his presidential veto to frustrate Republican plans of prolonging Trump-era tax cuts and any attempt to pass a national ban on abortion. But it could also trigger fiscal showdowns and the threats of government shutdowns. A clash could also be looming over raising the debt ceiling.