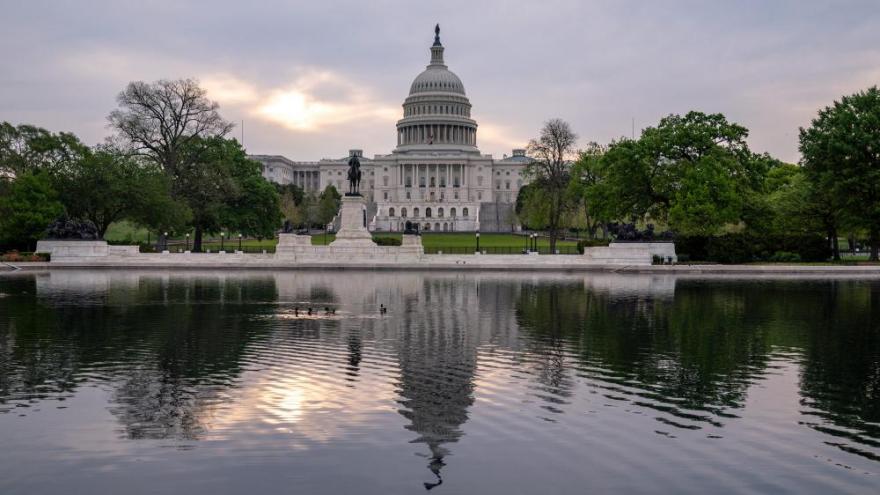 Senate Democrats are moving ahead this week with a sweeping proposal to rewrite US election laws -- a longshot bid meant to counteract the voter restrictions Republicans have passed at the state level.

(CNN) -- Senate Democrats are moving ahead this week with a sweeping proposal to rewrite US election laws -- a longshot bid meant to counteract the voter restrictions Republicans have passed at the state level.

The For the People Act, a version of which has already passed the Democrat-controlled House and is set for debate in the Senate Rules Committee on Tuesday, faces steep odds in the Senate. The legislation rewrites federal campaign finance laws, set out new ethics requirements for the President and Supreme Court justices and makes broad changes in election administration, from registration to early voting. It has garnered no GOP support, ensuring it won't overcome the 60-vote threshold needed to overcome a filibuster fight. And it has been met with hesitation by some Democrats, including West Virginia Sen. Joe Machin, who have shown little appetite to gut the filibuster and propel the bill forward.

But the pressure has grown on Democrats to take action as Republicans in battleground states, including Georgia, Florida and Arizona, passed new voting restrictions into law this year, with dozens of other states considering some type limitations on voting. Tuesday's Senate committee hearing offers Democrats an opportunity to rail against the recent flood of voting restrictions, while providing an opening for more liberal members to make the case for eliminating the filibuster.

"I think that the national government must play a role in making sure that elections are unfettered," House Majority Whip Jim Clyburn told CNN's Jake Tapper on Sunday. "I hold out hope that nobody is going to allow the filibuster to take away voting rights or any other constitutional right. The vote filibuster is all about extending debate. It is not about denying civil and basic constitutional rights."

Both Clyburn and Manchin have suggested they are open to a compromise on voting rights legislation, though there appears to be little movement among Republicans.

Conservatives see defeating the bill as a top priority both to ensure the filibuster remains intact and to block what they see as federal overreach into state elections. Senate Minority Leader Mitch McConnell has been particularly critical of the bill, calling it "a stunning one-party takeover of voting laws and elections in our country."

A spokesman for McConnell said the Kentucky Republican plans to be an active participant in Tuesday's hearing. Both sides are preparing for a long-slog debate, with a slew of amendments from Republicans.

The upcoming Senate fight has ratcheted up the rhetoric around voting rights -- with Democrats likening new restrictions to "Jim Crow 2.0" -- and energized outside groups on both sides of the aisle.

On the right, Americans for Prosperity, a group tied to Kansas billionaire Charles Koch, is spending about $500,000 on its "Don't Bust the Filibuster" initiative -- which includes radio and digital ads targeting several Democratic senators. They include Manchin of West Virginia and Kyrsten Sinema of Arizona, who have been cool to overturning Senate rules. Koch officials say they are broadly opposed to ending the filibuster and are concerned about donor disclosure provisions in the Senate bill.

Another group, the Election Transparency Initiative, is running its own digital campaign urging key Democratic senators to "stand strong" on the filibuster. The conservative organization, run by former Trump administration official Ken Cuccinelli, launched this year to focus on promoting new election laws at the state level and combating the For the People Act proposals in Congress.

The impact of the 886-page bill would be far-reaching.

The bill also would create independent commissions to redraw congressional districts, allow for public financing of congressional and presidential elections and require public disclosure of large donors to politically active nonprofits in an effort to unmask so-called "dark money" in elections.

Its provisions also touch the executive branch. The bill would require presidents, vice presidents and White House contenders to release their tax returns. Former President Donald Trump refused to do so as a candidate and officeholder, breaking with a long tradition of voluntary disclosure.

Additionally, it would allow federal candidates to receive public matching funds for small-dollar contributions, and it would require non-profit groups active in politics to disclose the identity of donors who contribute more than $10,000.

That's a key sticking point for officials with the Koch-aligned group, who argue that violates constitutional protections of free speech and free association. The charitable arm of Americans for Prosperity is currently fighting disclosure requirements in the state of California before the US Supreme Court.

"We're focused on the bill's violation of people's First Amendment rights and more broadly how it discourages individuals from being able to join together and hold political figures accountable," said Casey Mattox, AFP's vice president of legal strategy.

Liberal groups are also pouring money into a national ad campaign aiming to gin up grassroots support for the legislation and keep the pressure on Democrats to pass it.

"We should all be wanting to expand access to the ballot box. Sadly, that is not what we are seeing from the Republicans right now," said Tiffany Muller, president of End Citizens United / Let America Vote Action Fund, which launched a $12 million television push ahead of Tuesday's debate, including national ads and state-specific spots in Arizona, Georgia, Nevada, New Hampshire and West Virginia.

The House version of the For the People Act passed on a largely party-line vote in March.

The bill the Rules Committee will take up Tuesday differs in several ways after Democrats tweaked the bill to address concerns raised by election administrators. The new version, for instance, no longer requires local officials to conduct early voting on the Monday before Election Day -- a concession to election supervisors who argued they need the day to prepare for the election.

The bill still mandates 15 consecutive days of early voting with polls open at least 10 hours a day, but it now exempts jurisdictions with fewer than 3,000 registered voters and those that mail ballots to all voters.

Smaller jurisdictions still must allow at least eight hours of voting on at least one Saturday and Sunday during the early voting period, under the revised bill.

While the sweeping election bill is unlikely to survive as written, Manchin recently told the Inter-Mountain newspaper that he's hoping to hash out a compromise proposal.

"Hopefully we can come together," Manchin said. "Our staff is working with Jim Clyburn's staff. We're working with Raphael Warnock, everybody that has a concern. There is not a person who should not have access (to voting) and it should not be made difficult. That's not who we are as a country. It's not who we are as democracy, and democracy will not survive unless you have an open and fair (election)."

Some Democrats are already eyeing more modest legislative options on voting rights. One such proposal, the John Lewis Voting Rights Advancement Act, would require federal preclearance for some states looking to change their election laws.

On Monday, Georgia Democratic Sen. Jon Ossoff unveiled another: the Voters' Access to Water Act. The bill comes in response to a new law in Georgia that criminalizes approaching voters in line to give them food or water.

"This is about a Good Samaritan, nonpartisan volunteer handing a bottle of water to a voter who's perhaps been waiting in line for eight hours," Ossoff said in a press event Monday. "This is not about partisan politics. This is about decency, basic decency."

Democrats may be keen to advance some type of voting rights legislation, but Republicans have grown increasingly frustrated with the notion that opposing any federal election overhaul is akin to voter suppression.

One Senate GOP aide predicted there would be little appetite among Republicans even for narrower voting legislation.

"The well is so poisonous right now around this issue," the aide said.