Want to attend the Biden inauguration? You'll pay a premium at DC hotels 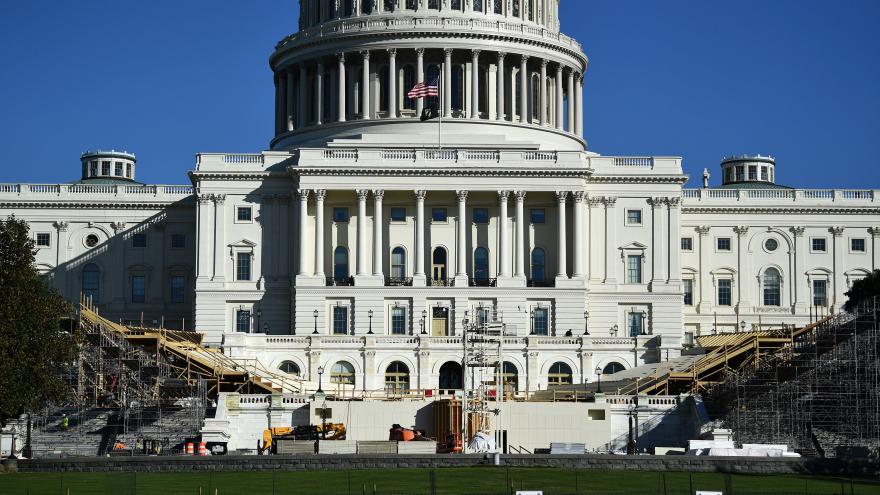 (CNN) -- Presidential inaugurations can be challenging in even the best conditions. Taking place in late January, the weather in DC is often numbingly cold. Large crowds of people clamoring to get near a stage isn't always fun. And this year, with a surge of Covid-19 cases, requirements for testing, and possible quarantines, will people even come?

Judging by hotel bookings, the answer is a resounding "yes."

Several of DC's signature hotels have already reached capacity for January 20, and many of those that do still have vacancies are increasing their rates and enforcing minimum-stay periods.

Rooms are sold out at the St. Regis and all four Ritz Carltons; the nearest Hyatt with availability is outside of the city limits.

And it's not just luxury hotels seeing spikes in interest. Every Holiday Inn in DC is sold out for Inauguration Day, with the closest rooms still available being in Alexandria, Virginia's Old Town.

Shelby Durkin and her friends decided to book flights "within the hour Wolf Blitzer projected Biden to win."

As three recent college graduates, they were looking for affordable lodging options, Durkin said. At first, she explained, they found a promising Airbnb that was $63 per night.

Despite these costs, Durkin and her friends are determined to attend Inauguration Day. "To see Kamala Harris sworn in as the first woman Vice President was something we felt we couldn't miss," she said.

When she is sworn in, Kamala Harris will become America's first female, first Black and first South Asian vice president.

The historic nature of the ceremony similarly motivated Tatjana Wacenske and her family.

"My daughter will see someone that looks just like her take such a monumental stride for not just Black women, but for all women," Wacenske said. "We decided to attend this historical inauguration because we finally feel capable of inhaling."

Inauguration in a pandemic

While a presidential inauguration is always a busy time for DC hotels, the coronavirus pandemic has further limited availability. To protect patrons, many hotels are not booking to capacity, making rooms even more scarce, and therefore, expensive.

Jennifer Sorlie, the director of marketing for the popular Riggs Hotel in downtown DC, explained that the hotel is waiting to see what the event will look like before they finalize their Inauguration week prices. They are currently accepting reservations for January 20 with a two or three night minimum, and the rooms will be non-refundable.

Despite the excitement over the event, many in DC are worried about the influx of visitors for Biden's inauguration.Pressed on whether she had concerns about large groups of people traveling to the District in January, especially now that 42 states are on DC's high-risk list, Mayor Muriel Bowser would only say that she has been involved with early planning phases with the federal government for the ceremony, as she's previously noted.

Washington, DC has reported 649 new Covid-19 cases in the past week, as of November 11, with a 2.28% testing positivity rate. The District has logged more than 18,000 confirmed cases since the start of the pandemic, according to Johns Hopkins University tracking figures.

Despite the elevated costs and the challenges of traveling during a pandemic, many Americans are still excitedly planning their visits.

For Douglas Brinkley, a presidential historian at Rice University, the influx of travelers is not surprising. "Attendance is a bragging right. You can tell friends and family that you participated in a genuine historic moment for the ages."

Another presidential historian, Tim Naftali of New York University, reached a similar conclusion. "As President Trump's stubborn denial of the results of this election continues, many will look to the ritual on January 20, 2021 as confirmation of the transfer of power. We have never needed that confirmation in this way before," he told CNN.

That sentiment has clearly motivated those headed to DC.

Eddy Sarosy told CNN that he and his friends booked a hotel room a few days before the election was called, and plan to road trip to the event from New York. Sarosy said the expensive rooms were worth it because "this is a big moment in our country's history and it only feels right to attend."

Another motivating factor for Sarosy? "I'm going to make sure the crowd is bigger than the last time around."