Warren: Democrats will lose 2022 midterms if we don't deliver more 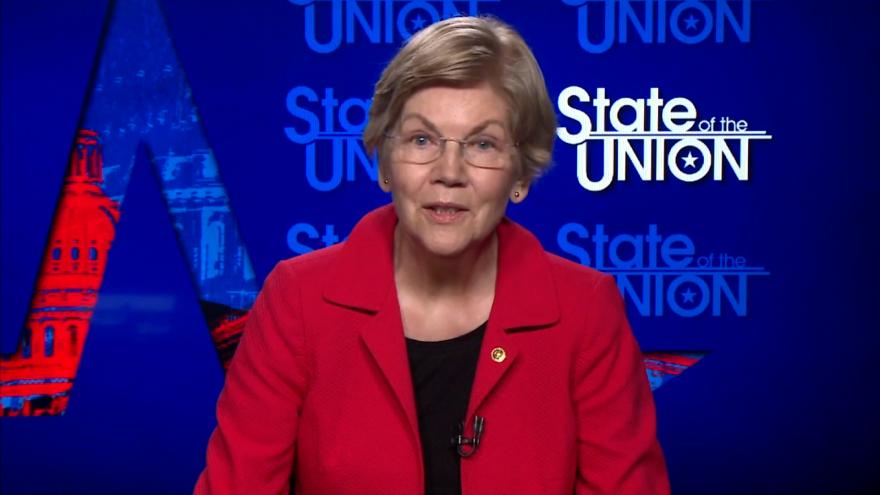 (CNN) -- Massachusetts Sen. Elizabeth Warren offered a warning to fellow Democrats on Sunday, saying that if they "don't get up and deliver" while their party has the majority in Congress, they will lose the 2022 midterm elections.

"There is so much we can do. And if we do it over the next 200 days, we're going to be in fine shape. ... Take it to the people what we've done," Warren told CNN's Dana Bash on "State of the Union." "I think we're going to be in real trouble if we don't get up and deliver, then I believe that Democrats are going to lose."

She continued, "Democrats win when they ... work on behalf of working people. And we can't just rest on what we've already done. We need to be fighting going forward."

Warren's remarks come as Democrats struggle to come up with cohesive messaging ahead of the 2022 midterms. The party is looking to maintain its narrow control of the US Senate and the US House of Representatives, amid intraparty divisions on issues such as immigration and Covid relief. President Joe Biden is also facing low approval ratings as the nation grapples with inflation and the war in Ukraine strains the global economy.

Asked if the US was headed toward an economic recession if Congress and Biden do not act, Warren, a member of the Senate Banking Committee, said major change was needed to help the economy and Americans who can't afford the rising prices.

"We are in an uneasy economic moment, but I think ... talk of recession is way too early," she said. "We are doing better on un-kinking the supply chain and that helps. We also need to push back against the giant corporations that have decided, not only are they going to pass along costs, they're going to take a big dollop of extra profits. And those are things that get our economy -- I think the way to describe it, is they get it out of whack."

Warren on Sunday also emphasized her support for ending the pandemic-era protocol known as Title 42 that allows border authorities to turn migrants back to Mexico or their home countries because of the public health crisis exacerbated by the coronavirus pandemic. Democrats are divided on their response to the Biden administration's decision to rescind the measure next month.

"Title 42 is not consistent with our values, and it doesn't keep us safer," she told Bash. "The Biden administration is putting plans in place to deal with people who are asking for amnesty and humanitarian relief at the border, but keep in mind, we need comprehensive immigration reform and that's something all the Democrats are on board for."

Republicans are using the repeal of Title 42 as a talking point to attack Democrats on immigration. House Minority Leader Kevin McCarthy is leading a group of fellow GOP members to the southern border in Texas on Monday.

Asked about McCarthy, who is facing fallout over contradictory statements about conversations he had with other Republicans about then-President Donald Trump in the days following the January 6, 2021, insurrection, Warren called him "a liar and a traitor."

"This is outrageous. And that is really the illness that pervades the Republican leadership right now, that they say one thing to the American public and something else in private," she told Bash. "Shame on Kevin McCarthy."

Warren also said Sunday she would not run for president in 2024, amid reports that her progressive colleague, Vermont independent Sen. Bernie Sanders would run if Biden doesn't.