Washington, DC, approves creation of new agency to provide services for migrants arriving from other states 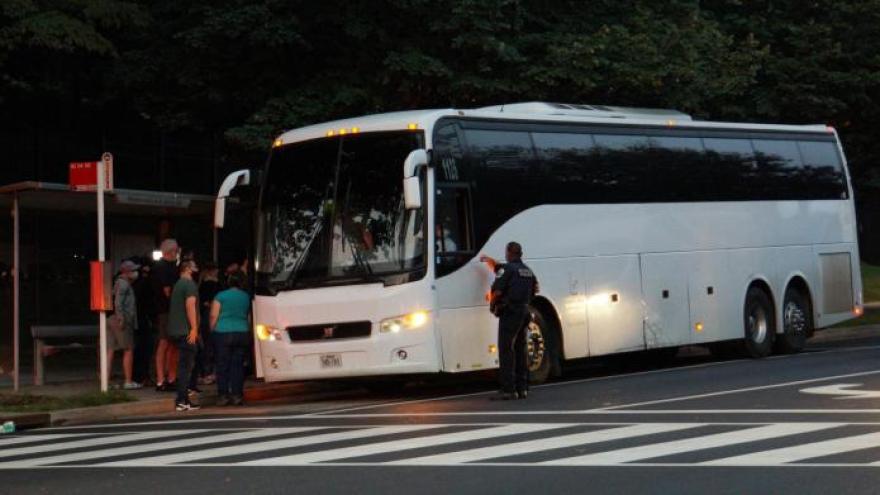 A group of mainly Venezuelan migrants, who were sent by bus from detention in Texas, are dropped off outside the Naval Observatory, the official residence of U.S. Vice President Kamala Harris in Washington, DC, on September 17.

(CNN) -- The Washington, DC, city council voted Tuesday to create a new office focusing on the recent arrival of migrants who were sent to the district from states whose leaders oppose the Biden administration's stance on immigration policies.

The move aims to improve response to the thousands of migrants who have been arriving in the nation's capital from Arizona and Texas, whose Republican leaders have come under scrutiny for the tactic.

The Washington city council approved the launch of the new agency in a unanimous vote after Mayor Muriel Bowser requested it to address the needs of migrants.

"With the establishment of the Office of Migrant Services, we stay true to our DC values by creating a framework for providing support to individuals and families while ensuring our homeless services systems continue to support our DC residents," said Bowser, who is a Democrat.

The new agency will be housed within the district's Department of Human Services. Its goal is to provide arriving migrants with basic needs-- including meals, transportation, urgent medical care as well as transportation to connect people to resettlement services.

The district will allocate $10 million to establish and support the new office, and Bowser said she will seek reimbursement for part of that funding through the US Federal Emergency Management Agency.

About 8,000 migrants have arrived in the capital over the past six months, according to councilmember Brianna Nadeau, who sponsored the bill proposing the creation of the agency. Nadeau believes that the passage of the bill can help the city provide better assistance to the migrants, according to her spokesperson.

"This legislation will ensure that every migrant is greeted by a bilingual, culturally competent professional; that they have respite; that they have food and clothing, and that they are safe, and welcome," Nadeau said.

The new agency is being created as at least three Republican governors send migrants out of their states to liberal cities, including Chicago and New York, and recently Martha's Vineyard in Massachusetts. The drop-offs, some of which were done with little notice, have left officials on the receiving end struggling to accommodate the needs of thousands of people

Dozens of migrants were left outside the gated residence on grass and sidewalks because those in charge of responding to the group weren't prepared to meet them at that location, leaving volunteers scrambling to make arrangements.

SAMU First Response, one of the groups helping migrants in Washington, was not provided prior notice of the drop-off location, according to the group's managing director, Tatiana Laborde.

"By the time our team got to the migrants, they were very lost," Laborde told CNN Thursday morning. "(The migrants) didn't understand where they were standing -- this is a very residential area."

Abbott's efforts to send migrants to Washington and New York has cost his state more than $12 million.

"VP Harris claims our border is 'secure' & denies the crisis," Abbott tweeted at the time. "We're sending migrants to her backyard to call on the Biden Administration to do its job & secure the border."

Also last week, Florida Gov. Ron DeSantis took credit for flying about 50 migrants to Martha's Vineyard in Massachusetts, which was not expecting the group. The Republican governor's move was met by backlash from White House, migrants' advocates and Democratic officials.

The term "sanctuary state" is a broad description applied to jurisdictions that have policies in place designed to limit cooperation with or involvement in federal immigration enforcement actions.

Similarly, Arizona Gov. Doug Ducey has sent more than 1,800 migrants to Washington, DC, and has no plans to stop, according to the Republican governor's office. As of last week, 50 buses carrying migrants from Colombia, Peru, Venezuela have dropped off migrants in the capital, with efforts costing about $4 million.