'We're leaving as fast as we can': University of Idaho reels with unease days after killing of 4 students and no suspect identified 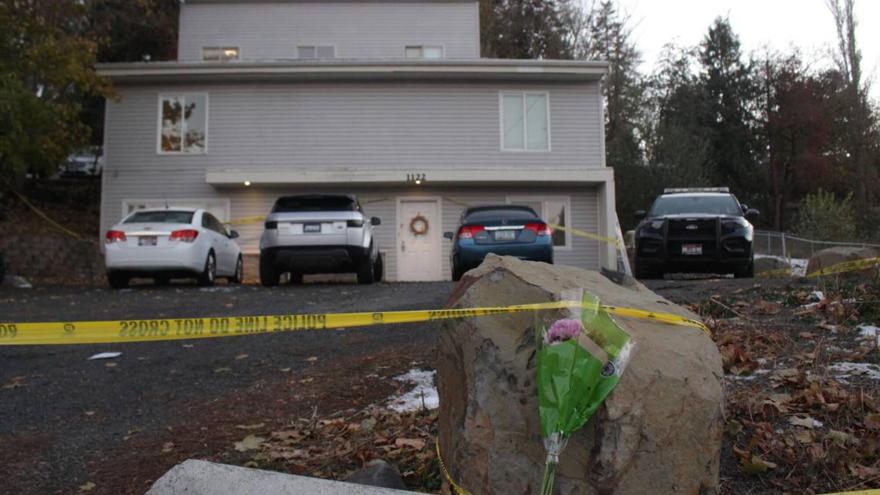 Four University of Idaho students were found stabbed to death on November 13 in their shared home near campus in Moscow, Idaho.

(CNN) -- Five days after four University of Idaho students were found stabbed in their off-campus home, a deep sense of apprehension and grief shrouded the community as authorities released a map and timeline of the victims' movements and worked to identify a suspect.

The university's often-packed parking lots had many empty spots Thursday after scores of students decided to return home or leave the area after the quadruple homicide last weekend shocked the college town of Moscow, Idaho.

"Everybody kind of just went back home because they're scared. ... It's definitely uneasy on campus right now," student Nathan Tinno told CNN.

Tinno, who said the community is trying to approach the tragedy with sympathy, added the fact that no perpetuator has been caught in the case has elevated the sense of fear on campus.

The victims were found on the second and third floors of the home, Idaho State Police Communications Director Aaron Snell told CNN Friday.

Latah County Coroner Cathy Mabbutt told CNN she saw "lots of blood on the wall" when she arrived at the scene. She confirmed there were multiple stab wounds on each body -- likely from the same weapon -- but would not disclose how many wounds nor where most were located.

Stab wounds on the hands of at least one victim appear to be defensive wounds, according to Mabbutt. She said there was no sign of sexual assault on the bodies during the autopsies.

Hoping for tips from the community, investigators on Friday released a map and timeline of the victims' movements last weekend. The map shows the four students spent most of the night separated in pairs.

Goncalves and Mogen were at the Corner Club sports bar between 10 p.m. and 1:30 a.m. They picked up food at a food truck at 1:40 a.m. before heading home.

The four victims were back at the house by 1:45 a.m. Sunday.

Two other roommates were inside the home at the time of deaths -- neither was injured nor held hostage, according to university president Scott Green.

Police have said they don't have a suspect. Snell said no one has been "included or excluded as a person of interest and/or a suspect."

Investigators hope the roommates will help them "figure out what occurred and why."

"That's their story to tell," he said.

The causes of death has been determined a homicide, according to a statement by Mabbutt. The autopsies are completed, and the findings will be released when available, an employee at the Spokane County Medical Examiner's Office told CNN.

The killings, which happened little more than a week before Thanksgiving break, have instilled harrowing sentiments among students as authorities investigate leads to identify a suspect or locate a murder weapon.

"It's so dark. It's just like a dark cloud over everything," Ava Driftmeyer said. "We're leaving as fast as we can."

Driftmeyer, who said she lives near where the four students were killed, described that it's been a difficult situation to process, both mentally and emotionally.

"I just don't even think it's like set in yet. ... You know how insane this is? And the fact that there's no answers is like the worst feeling ever," she said.

Police said Wednesday they could not definitively determine that the public was not a risk, backtracking an earlier statement that the attacks were targeted.

"We cannot say there's no threat to the community," Moscow Police Department Chief James Fry said Wednesday during a news conference. "And as we have stated, please stay vigilant, report any suspicious activity and be aware of your surroundings at all times."

The university also reminded students that mental health support is available for them.

"We are all still working though our grief and a range of emotions. Compounding this is the frustration and concern that no one has been arrested for these crimes," Green said in a statement.

"Students, you are encouraged to do what is right for you. Whether this is going home early or staying in class, you have our support," Green added.

Victim's father says she fought for her life during attack

As many details remain unclear, one of the victim's parents revealed his child's struggle with the attacker.

The father of Xana Kernodle said he spoke with his daughter midnight Sunday, just hours before she was attacked and killed. Citing an autopsy, he said she fought off her attacker through the end.

Kernodle said Xana stayed in regular communication with her family. "I think midnight was the last time we heard from her, and she was fine," he told the station, adding that he doesn't understand why his daughter and her roommates were killed in their own home.

Kernodle said the door of the home opened with a number code.

"So, they either knew that or they just kind of went around and found the slider [sliding door] open," he told told KPHO/KTVK.

Just hours before the four students were killed, Goncalves had posted a photo of the group with the caption, "one lucky girl to be surrounded by these ppl everyday," adding a heart emoji.

The scant information available regarding the case has been frustrating those closest to the victims as well as the campus community. Yet a video showing two of the victims has helped police get a clearer idea of the hours leading up to the homicides.

In a live Twitch stream from a food truck called Grub Truckers, Mogen and Goncalves were last seen alive while ordering $10 worth of carbonara around 1:40 a.m. local time Sunday in Moscow. As they waited for about 10 minutes for their food, they chatted with each other as well as other people standing by the truck.

Joseph Woodall, who manages the food truck, told CNN the two students did not seem to be in distress or in danger in any way.

Later Sunday morning, the four were killed inside their home, authorities said. Police responded to the residence after receiving a 911 call around noon reporting that someone was unconscious.

When police arrived at the home, they walked into a grisly, bloody crime scene.

All four were pronounced dead at noon, and police have not revealed who made the 911 call.

"They were smart, they were vigilant, they were careful and this all still happened," Goncalves' older sister, Alivea, said in a statement on behalf of the family to the Idaho Statesman.

"No one is in custody and that means no one is safe. Yes, we are all heartbroken. Yes, we are all grasping. But more strong than any of these feelings is anger. We are angry. You should be angry."