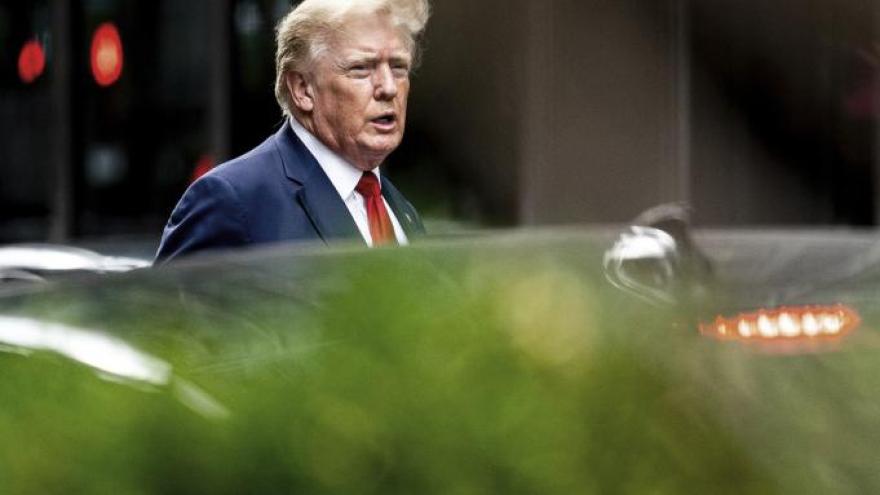 (CNN) -- The stark video that former President Donald Trump shared on his Truth Social platform this week following the FBI search of his Florida estate had all the makings of a traditional presidential campaign ad.

It melded Trump's words decrying high inflation and a messy US withdrawal from Afghanistan with videos of violent crime and war.

"But soon, we will have greatness again," Trump intoned.

The video is just one recent example of the former President hinting broadly at a 2024 campaign without formally declaring a bid for the White House. But even as Trump's allies urge him to speed up a campaign announcement in an effort to blunt his deepening legal troubles, moving forward could constrain his ability to tap into the vast war chest he has amassed since leaving the White House, campaign finance experts say.

Here's a look at Trump's fundraising operations and some of the regulatory and legal hurdles he could face as he plots a third presidential campaign:

How is Trump currently raising money?

The former President controls a well-funded political operation that includes a super PAC -- which can raise and spend unlimited sums -- along with several traditional political action committees.

At the heart of Trump's political operation is Save America, the leadership PAC that he established within days of losing the presidential election in November 2020 that collected massive sums in the waning days of his administration.

Although Trump's fundraising pace has slowed some in 2022, Save America ended June with more than $103 million remaining in its cash reserves, according to its latest filing with the Federal Election Commission (FEC).

That's an unprecedented stockpile of political money for a former president and amounts to nearly three times the cash that the Republican National Committee had remaining in its coffers at June's end.

As he did during his presidency, Trump has relied on small-dollar donations to fuel his political operation.

And he continues to bombard his supporters daily with pleas for cash. One text used the recent FBI search at his Mar-a-Lago estate to ask supporters to "rush in a donation IMMEDIATELY to publicly stand with President Trump against this NEVERENDING WITCH HUNT!"

Declaring a third run likely would super-charge Trump's fundraising -- although it risks drawing attention and money away from other Republicans on the ballot in this fall's midterm elections.

Ronna McDaniel, the chairwoman of the Republican National Committee, has cautioned against any presidential contender stepping on the midterms.

"I would say to any candidate, let's not skip over what is going to be one of the most important and consequential midterms in our country's history," McDaniel said recently on Fox. "We need to get behind these House candidates and these Senate candidates and make sure we win in November."

How do leadership PACs and super PACs differ from presidential campaign committees?

Super PACs can raise unlimited amounts of money from individuals, unions and corporations and must operate independently of the candidates they support. Presidential campaigns, however, are barred from accepting union and corporate money and face strict contribution caps.

Leadership PACs also face contribution limits. They are generally established to allow politicians to support other candidates. But over the years, they've become campaigns-in-waiting for presidential contenders -- providing a source of political contributions to pay staffers, underwrite travel and other political expenses.

The rules on spending by leadership PACs are far more relaxed than those for campaign committees. The FEC does not restrict politicians from using donors' contributions to leadership PACs to pay personal bills.

How would a campaign affect payments for Trump's mounting legal expenses?

As a presidential contender, Trump's spending would face heightened scrutiny because it is "illegal to convert campaign money to the personal use of the candidate," said Adav Noti, a former Federal Election Commission lawyer who is senior vice president and legal director of the nonpartisan Campaign Legal Center

It would violate campaign finance laws, for instance, for Trump to use donations to his presidential campaign to pay legal fees for personal or business matters that are not directly related to his candidacy, such as the New York attorney general's civil investigation into the Trump Organization's finances, Noti added.

But money raised by Trump's presidential campaign could pay legal bills connected to his conduct as a candidate or officeholder, said Richard Briffault, a Columbia Law School professor and an expert on campaign finance law.

The Republican National Committee has paid some of Trump's fees related to the New York probe, citing his role as "a leader of our party." But an RNC official recently told CNN that those payments are expected to end should he become a 2024 candidate, under the party's "neutrality policy."

Can Trump use Save America's money to run a traditional presidential campaign?

For the most part, no.

Save America cannot transfer unlimited sums directly into his campaign coffers. As a general rule, PACs cannot donate more than $10,000 over a two-year election cycle to any single candidate.

"We've never had a former president with a leadership PAC before, much less with nine figures sitting in it," Noti said. "But the law, at least, is clear that it can't go to the campaign."

Could Trump transfer the millions in Save America to a super PAC that backs his candidacy?

Noti argues that rolling Save America's money into a super PAC also would be prohibited if the super PAC is focused solely on advancing Trump's presidential ambitions.

But other election law experts say a candidate might push the envelope.

For instance, a recent 3-3 deadlock at the FEC -- in a case that turned on whether Florida Rep. Byron Donalds had broken campaign laws aimed at keeping big pots of money at the state level out of a federal super PAC -- could provide a blueprint for a candidate to move leadership money to a super PAC.

Transferring a candidate's leadership PAC money into a super PAC that benefits that candidate "clearly violates the intentions" of the law, Briffault said, but "it's not clear that anyone would blow the whistle on that."

And Fred Wertheimer, of the Democracy 21 watchdog group, said with the FEC's six-member panel often deadlocked, "There's no enforcement."

When does Trump become a candidate?

Trump has not declared his candidacy and has not filed any paperwork with the Federal Election Commission to register as a 2024 presidential contender.

But campaign finance watchdogs argue that Trump has been skirting campaign finance laws for some time by talking and acting like a candidate without formally registering as one and complying with federal fundraising and spending limits.

Just consider his public statements: Back in February at the Conservative Political Action Conference Trump said of another presidential campaign: "We did it twice and we'll do it again. ... We're going to be doing it again a third time."

And, as CNN's Melanie Zanona reported, Trump told a group of House Republicans attending a dinner at his Bedminster, New Jersey, golf club recently that he's "made up his mind" about launching a 2024 presidential bid and it's just a matter of "when" he announces it, according to one attendee, Indiana Rep. Jim Banks.

"If you walk like a duck, sound like a duck, are a duck, you are supposed to register as a candidate," said Stephen Spaulding, a former Federal Election Commission lawyer who is now senior counsel for policy at the watchdog group Common Cause.

Trump has "clearly bent over backwards to hint about what his intentions are," Spaulding said.

Trump spokesman Taylor Budowich did not answer a question from CNN about the former President's potential announcement and said he failed "to see the news value of the opinions of leftist campaign finance 'experts' or Democrat-funded organizations."

Politicians often delay their announcements because they lose their ability to coordinate activities with super PACs and other outside organizations once they formally become a candidate, experts say.

"What we've seen over the last several election cycles is candidates basically pretend they are not candidates," Noti said, "so they can get their super PACs and their outside (groups) up and running."

A Democratic super PAC, American Bridge 21st Century, has pressed regulators at the Federal Election Commission to take Trump to task for his all-but-declared candidacy, with no success.

Last month, American Bridge filed a federal lawsuit in an effort to force agency action, but it appears unlikely the case will be resolved in time to influence the 2024 election.