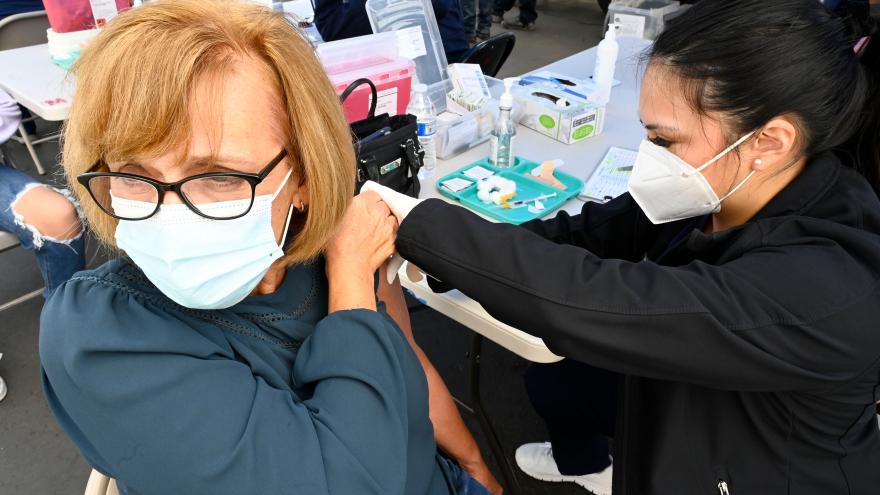 (CNN) -- On Tuesday, the US Food and Drug Administration expanded its authorization of the Pfizer/BioNTech and Moderna Covid-19 vaccines. Now, adults ages 50 and older are able to get a second booster if at least four months have passed since their first one.

Within hours, the US Centers for Disease Control and Prevention came out with a statement that says it will also allow second boosters as well as guidance for people who initially received the Johnson & Johnson vaccine. These individuals who subsequently got a booster are now eligible for a second booster shot, too.

All these developments come in the wake of the CDC's updated analysis showing that the highly transmissible BA.2 subvariant is the dominant strain in the United States.

Now that more people can receive an additional vaccine dose, should they get it? What are factors they might want to consider? Is there any downside to getting more shots? And does it make sense to wait until a big event such as international travel or a large wedding to get that booster?

To help us with these questions, I spoke with CNN Medical Analyst Dr. Leana Wen, an emergency physician and professor of health policy and management at the George Washington University Milken Institute School of Public Health. She is also author of "Lifelines: A Doctor's Journey in the Fight for Public Health."

CNN: Who is now eligible to receive an additional booster dose?

Dr. Leana Wen: Prior to the announcements this week by the FDA and CDC, people with moderate or severe immunocompromise were already eligible for an additional booster dose. Now, a much larger group is eligible.

Second, all adults -- regardless of age -- who received an initial Johnson & Johnson vaccine and then a booster at least four months ago are now able to receive a second booster dose with an mRNA vaccine, again either Pfizer or Moderna.

CNN: Now that a lot more people can get a second booster, should they?

Wen: First, I want to emphasize the importance of getting the first booster dose. According to the CDC, about half of Americans eligible for that first booster have not yet received it. That includes an astonishing 1 in 3 people 65 and older.

There is ample data that shows how important the initial booster is, especially against the Omicron subvariants, including the now-dominant BA.2 strain. During a time when BA.1 was the main variant, the effectiveness of two doses of the vaccine against severe disease dropped to 79%, according to a CDC study. The effectiveness of three doses remained high, at 94%.

The data around the second booster is less clear. Much of the research comes from Israel, where fourth doses have been widely available since the end of January. One study there of adults over 60 found that those who had a fourth Covid-19 vaccine had 78% lower risk of death during the Omicron surge compared with those who had a third shot at least four months earlier. However, the number of deaths was low in both groups.

Another Israeli study, published in the New England Journal of Medicine, found that while a fourth shot increased antibodies, it didn't boost protection much, and those who became infected were mildly symptomatic regardless of whether they had three or four shots. Complicating it all is that it's unclear how long the enhanced protection from the fourth dose will last.

All this says to me that the question of whether people should receive a fourth dose is not straightforward to answer. This cannot be a blanket recommendation to everyone, but rather nuanced guidance that's tailored to each person's individual medical circumstance.

CNN: What are factors people should consider in deciding whether to get the second booster shot?

Wen: First, consider your medical risk factors. If you are elderly and have multiple medical conditions, you are more likely to become severely ill due to Covid-19. Certainly, if you are moderately or severely immunocompromised, that should tip the scales in favor of getting the additional booster dose now.

On the other hand, if you are generally healthy, you are still very well-protected from severe illness due to the protection from the vaccine and the initial booster dose. It's not as urgent to get the booster, and there may also be an advantage to waiting.

CNN: Why might someone decide to wait on the booster?

Wen: Right now, the level of Covid-19 in the US is pretty low. Experts have been keeping a close eye on BA.2 in case it causes another surge, but the current transmission rate in most parts of the country is the lowest it has been in months. Because the enhanced protective effect of the second booster may not last long, it might be better to wait until there are clear signs of a surge before getting it.

In addition, there are studies underway to develop an Omicron-specific booster. If you haven't received any booster at all, I wouldn't recommend waiting for that variant-specific booster, but if you already received one, and especially if you are not particularly vulnerable, it may be reasonable to hold off for now.

Another group of people who are probably better off waiting is those who were recently infected with Omicron. It's unlikely that those individuals who were vaccinated and infected will be reinfected so soon. Especially if they are generally healthy individuals, I'd also advise them to wait a little longer before getting the additional booster.

CNN: Is there any known downside to getting the fourth dose?

Wen: Analyses of extensive Israeli data have not identified new safety concerns from the fourth dose. Hypothetically, there is the concern that if someone gets constant boosters, their immune system may not fire up as well if they got exposed to Covid-19, but this is not proven. The main downside would be the issue of timing -- is now the best time to get the fourth dose, or is it better to hold off? That will depend on each person's medical risk factors as well as their tolerance of risk, and specifically how important it is to them to keep avoiding the coronavirus.

CNN: Some people might want to wait until a big event like international travel or a large wedding to get that extra shot. Is that a good plan?

Wen: Not really. If you have not yet had your initial booster, get it now, because that first booster is important to maintain strong protection against severe disease. Don't wait on that first booster. I think it's hard to time a second booster around an event, and it would make more sense to time it around an expected surge.

That said, I can understand why people would want to be better protected for big events. Remember that there are other tools at our disposal to do so. If you want to be extra cautious, requiring vaccines and then testing all guests prior to getting together indoors will substantially reduce risk.

Know where you could access treatment in case you do get infected. And let's not forget masks -- a high-quality mask (N95 or equivalent) protects you even if others around you are not masking. Boosters are one very important tool that can complement these other tools to help us reduce our individual risk.