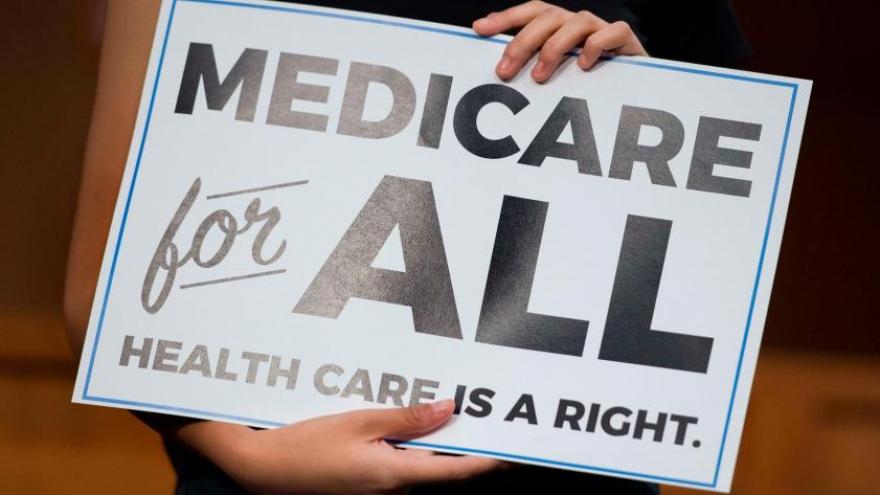 Many Democrats running for the 2020 presidential nomination want to get more people insured by broadening Medicare to cover all Americans.

(CNN) -- Many Democrats running for the 2020 presidential nomination want to get more people insured by broadening Medicare to cover all Americans.

But if Sen. Bernie Sanders' sweeping "Medicare for All" plan were enacted, it would mean big changes for the more than 60 million people already enrolled in Medicare, the federal health program for the elderly and disabled.

While the Vermont senator argues that his proposal would provide even more benefits for seniors, others, particularly former Vice President Joe Biden, have warned that it would transform the 53-year-old program beyond recognition, despite keeping the name intact.

"Medicare goes away as you know it," Biden said in July at an AARP candidate forum. "All the Medicare you have is gone."

The question is whether that's better or worse for seniors whose coverage would change -- though the likelihood of any Medicare for All-type program being enacted by Congress also depends on whether Democrats win the Senate in 2020.

Other candidates also use the term "Medicare" in their health care proposals, though most are actually pitching government-run insurance plans, known as a public option. These reforms would be aimed at those who are not yet eligible for today's Medicare program.

The Democratic contenders are evoking Medicare because it is a highly beloved federal program. Some 82% of those surveyed had a "very favorable" or "somewhat favorable" view of Medicare, according to a July Kaiser Family Foundation poll. And 95% of those on Medicare rate their coverage as "excellent" or "good," the poll found.

"Biden is not wrong. Sanders is getting rid of Medicare," said Christopher Holt, director of health care policy at the American Action Forum, a conservative think tank. "I understand why Sanders doesn't like that framing. Seniors are particularly sensitive to changes in their benefits. I can also understand why Sanders thinks that's unfair, because he believes he's giving them something better."

Currently, many Medicare enrollees have to pay premiums, deductibles and a share of doctor and prescription drug charges. Unlike those with employer-sponsored coverage or Affordable Care Act plans, Medicare beneficiaries are not protected by annual limits on out-of-pocket spending, so those who are sick can find themselves saddled with big bills.

To help with that, millions of Medicare enrollees also have some type of supplemental insurance either provided by their former employer or bought from private insurers.

Seniors also currently have the option to enroll in Medicare Advantage plans, which are sold by private insurance companies and provide a cap on out-of-pocket expenses. The policies also typically offer additional benefits, such as dental care, eye exams or fitness programs. But they usually have fewer doctors in their networks and can include a more involved approval process for medical care than traditional Medicare. More than one-third of beneficiaries signed up for one of these plans in 2018.

Under Medicare for All, seniors -- like all Americans -- would be enrolled in a government-run plan with very broad access to doctors and have no premiums, deductibles or out-of-pocket expenses. Some would be subject to higher taxes, depending on their income, to pay for the program, Sanders has acknowledged. Private insurance, including Medicare Advantage plans, would essentially be eliminated.

Sanders has accused Biden of using "misinformation" to attack his plan, which the senator says would provide the elderly with access to a greater array of benefits.

Biden's campaign, however, says that seniors should be aware that the current Medicare program would change under Sanders' plan. They would no longer have a choice of selecting a private Medicare Advantage policy, for instance, a campaign staffer said.

The former vice president's plan would leave Medicare intact, along with private insurers offering Medicare Advantage plans, but give younger Americans the option of enrolling in a government-run policy, which he terms "a public health insurance option like Medicare," if they don't like their current coverage.

He wants to build on Obamacare and not scrap existing coverage programs.

"Obamacare is working," Biden said at CNN's debate in July. "No one has to keep their private insurance, but if they like their insurance, they should be able to keep it ... If they don't, they can buy into the Biden plan, which is Obamacare."