What Republicans plan to do with their new House majority 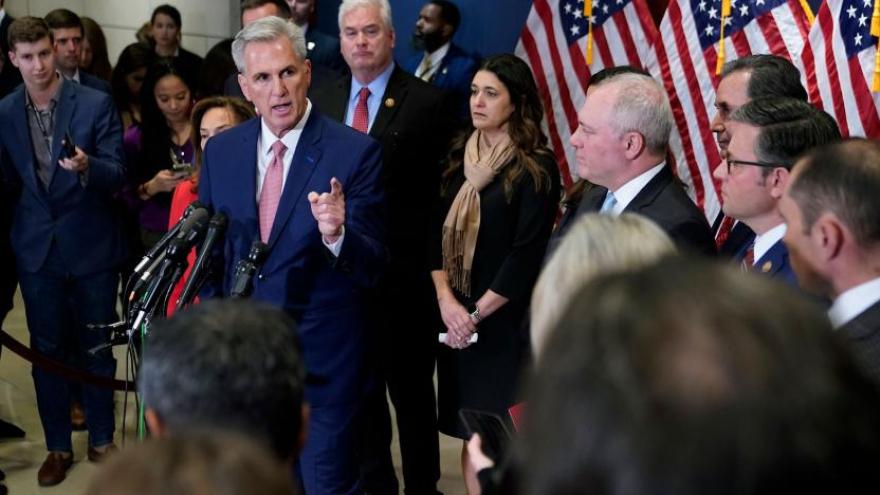 House Minority Leader Kevin McCarthy of California speaks with members of the press on November 15 on Capitol Hill in Washington. Winning the House majority will give Republicans some newfound power to set the agenda when they take over the chamber in January.

(CNN) -- Winning the House majority, even with a smaller margin than they'd hoped, will give Republicans some newfound power to set the agenda when they take over the chamber in January.

House Republicans will have subpoena power in the majority and control over powerful committees -- and they plan to make investigations into the Biden administration a top priority.

On the legislative front, there will be some must-pass policy issues -- like funding the government -- that will test the ability of Republicans and Democrats to work together.

House Republicans gear up for investigations

House Republicans are eyeing potential probes into everything from the chaotic pullout from Afghanistan, border policies being overseen by Homeland Security Secretary Alejandro Mayorkas, the origins of the Covid-19 pandemic, the FBI search of Mar-a-Lago, business dealings involving President Joe Biden's son, Hunter, and the bureaucratic decision-making behind Covid-related school closures and vaccine mandates.

House Republicans may also use their majority to push a counter-narrative around the January 6, 2021, attack in an attempt to shift blame away from former President Donald Trump after a violent mob of his supporters stormed the Capitol.

Even before the party clinched the House majority, some of the investigative groundwork laid out by Republican officials had started to come to fruition. A federal judge in Louisiana on Monday, for instance, ordered an FBI cybersecurity official to be deposed in a lawsuit alleging that the FBI coerced social media companies to block stories about Hunter Biden's laptop ahead of the 2020 election.

The FBI deposition is one of several sought by the state Republican officials in a lawsuit accusing Biden officials of effectively enforcing government censorship by pushing social media companies to, among other things, police speech about the origins of the virus that causes Covid-19, the efficacy of face masks and health care measures intended to curb the spread of the virus, as well as claims about election integrity and the security of voting by mail.

It's not yet clear how far House GOP leader Kevin McCarthy is willing to go when it comes to January 6 and the 2020 presidential election. And some Republicans argue that the party would be better served by moving past 2020.

Some other investigative ideas under consideration among House Republicans include establishing a select committee on China -- a longtime priority for McCarthy. The GOP conference voted for McCarthy to be its leader on Tuesday, setting him up to be the next speaker assuming he wins 218 votes, or a majority of the House, when the full chamber votes in January.

The president can exercise veto power over legislation, but House Republicans will still be able to push some messaging bills that highlight their agenda.

In an exclusive, wide-ranging interview with CNN, two days before the midterm elections, McCarthy outlined his plans for power, which includes tackling inflation, rising crime and border security -- three issues that have become central to Republicans' closing pitch to voters.

McCarthy also left the door open to launching eventual impeachment proceedings, which some of his members have already begun to call for.

During a private intraparty meeting on Monday ahead of leadership elections, McCarthy promised he would strip power from Democrats, vowing to kick Minnesota Democratic Rep. Ilhan Omar off the House Foreign Affairs Committee, and California Reps. Eric Swalwell and Adam Schiff off the House Intelligence Committee, according to a source in the room.

"They don't give out gavels in small, medium, and large -- we have the majority and we have the gavels," McCarthy said Monday, during the meeting.

But Republicans' slim majority will stand in the way of most -- if not all -- of their priorities in the chamber.

McCarthy's allies have recently attempted to convince moderate Democratic Rep. Henry Cuellar of Texas to switch parties in hopes of padding their slim margins, according to two sources familiar with the conversation. Cuellar flatly rejected the idea.