What to know about the prisoner exchange that freed Brittney Griner 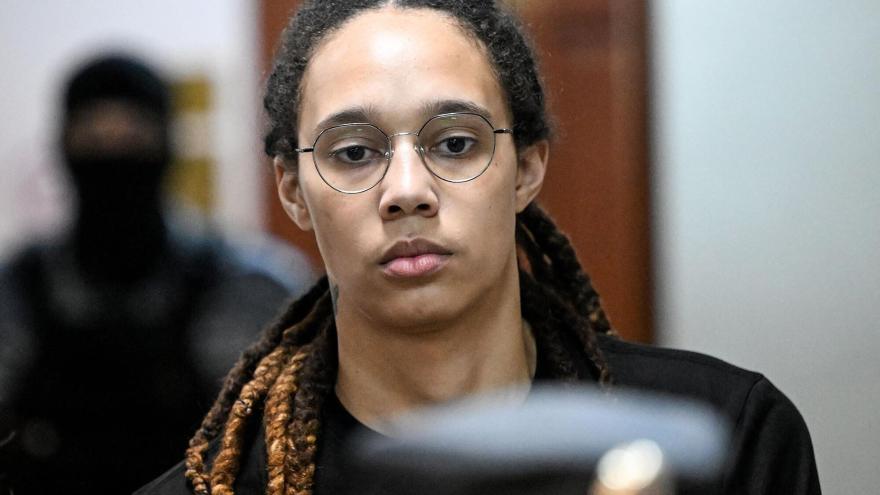 Brittney Griner, here at the Khimki Court, outside Moscow on July 27, was freed from Russian detention on Thursday.

Griner, a championship-winning player with the WNBA's Phoenix Mercury who for years played for a Russian basketball team in the WNBA's off-seasons, had been held in the country since February after she was arrested on drug possession charges at a Moscow airport.

Her release comes nearly eight months after Trevor Reed, a former US Marine who had been detained in Russia since 2019, was released during a prisoner swap for Russian citizen Konstantin Yaroshenko. The Biden administration had been working to secure Griner's release along with another American, Paul Whelan, who has been held by Russia for alleged espionage since 2018. CNN first reported in July that a potential deal for a prisoner exchange of Bout for Griner and Whelan had been offered by the Biden administration.

Here is what we know about Griner's detention and the prisoner exchange that resulted in her release.

Why was she jailed and where was she being held?

Griner, 32, was arrested on February 17, 2022, after having less than a gram of cannabis oil in her luggage while at Moscow's Sheremetyevo Airport and Russian authorities accused her of smuggling significant amounts of a narcotic substance, which the Russian government says is punishable by up to 10 years in prison.

Griner's lawyers told Russian judges during a hearing in July that the cannabis oil was medically prescribed for "severe chronic pain," and not for recreational use. She pleaded guilty to the charges in July and one month later was convicted and sentenced to nine years in jail. Her attorneys appealed the conviction in October and asked for a more lenient sentence but a Russian judge upheld her conviction while modifying her sentence to count the time she spent in pretrial detention after her February 17 arrest.

After being held in a detention center in Iksha, in November she was transferred to a penal colony in Yavas in the western Russian region of Mordovia.

There had been concern about the health and well being of Griner, who is Black and a lesbian, while detained in Russia. Though Russia decriminalized homosexuality in 1993, homophobia and discrimination still persists. On Monday, Russian President Vladimir Putin signed into law a bill that expanded anti-LGBTQ laws.

Conditions vary among Russian penal colonies, but political prisoners are often placed in harsh conditions where they can be subjected to "solitary confinement or punitive stays in psychiatric units," according to a recent human rights report from the US State Department. Russian law also allows forced labor in penal colonies, and in some cases, inmates have been tortured to death, the report says. There also are reports of prison authorities recruiting inmates to abuse other inmates, the report also says.

How did her release come about?

The prisoner exchange with Griner was "completed successfully at Abu Dhabi Airport" on Thursday, Russian state media said. Saudi Arabia and the UAE said in a joint statement that the two countries were involved in joint mediation efforts leading to the prisoner swap.

The Biden administration had been working to secure Griner's release in a two-for-one exchange with Whelan, but the Russians signaled recently that they were only willing to negotiate for Griner and not Whelan, a US official said. That is because Russia has been handling their cases differently based on what each person has been accused of. The Biden administration repeatedly made offers to get Whelan released as part of the deal with Griner, even after Russia made clear only Griner was acceptable.

President Joe Biden gave final approval for the prisoner swap freeing Griner over the past week, an official familiar with the matter has told CNN, adding that the president was updated on the swap as it took place.

A senior administration official also told CNN Griner's release was the right deal to make, while adding that it was "the only deal we could make right now."

The decision to exchange Griner for a figure nicknamed the "Merchant of Death" is controversial. Bout, a former Soviet military officer, was serving a 25-year prison sentence in the United States on charges of conspiring to kill Americans, acquire and export anti-aircraft missiles, and provide material support to a terrorist organization. Bout has maintained he is innocent.

What's next for Griner now that she has been released?

Griner is expected to land in San Antonio, Texas, a US official told CNN.

Though White House officials have said Griner is in "good spirits" she is likely to undergo a thorough medical evaluation. National Security Council strategic communications coordinator John Kirby told CNN on Thursday the first priority right now is "to make sure that she gets the adequate care she needs" after being detained and under "intolerable conditions."

"We suspect that there will be a need here for her to have access to proper health care before she's ready and fit to get back home. I don't think that that will take a very long time," Kirby told CNN's Kate Bolduan. "But again, that is going to be up to the doctors to work with the family on. That is going to be the main focus now, is just making sure that we look after her well being before she's able to, you know, to get on her way."

What has Paul Whelan said?

The former marine who is a US, Irish, British and Canadian citizen and was detained at a Moscow hotel in December 2018 for allegedly being involved in an intelligence operation, on Thursday told CNN he was happy that Griner was released but that he "was led to believe that things were moving in the right direction, and that the governments were negotiating and that something would happen fairly soon."

Speaking in an exclusive phone call from the penal colony where he is being held in a remote part of Russia, Whelan also told CNN he was surprised not to have been included in the swap with Bout and that he is "greatly disappointed" the Biden administration has not done more to secure his release.

"I am greatly disappointed that more has not been done to secure my release, especially as the four year anniversary of my arrest is coming up. I was arrested for a crime that never occurred," he said. "I don't understand why I'm still sitting here."