Where the Supreme Court stands on the Second Amendment 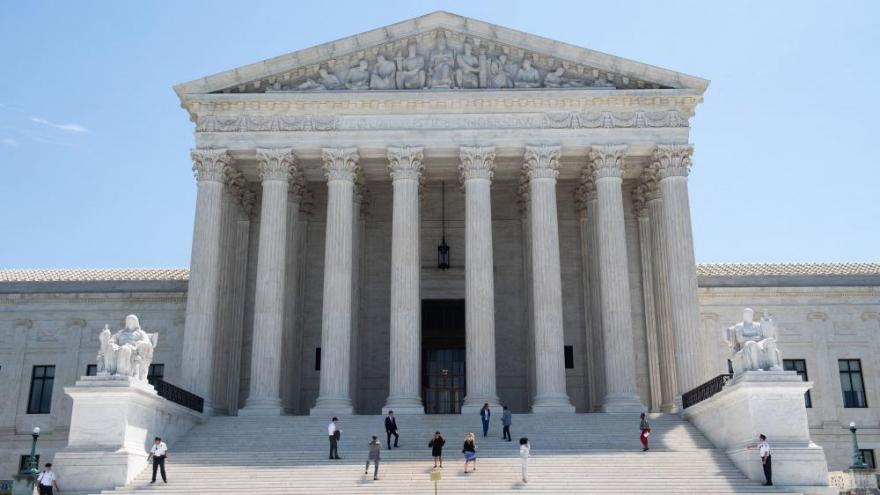 As the country reels from two mass shootings, supporters of gun restrictions are turning again to the debate over the scope of the Second Amendment, demanding that gun laws be strengthened.

(CNN) -- As the country reels from two mass shootings, supporters of gun restrictions are turning again to the debate over the scope of the Second Amendment, demanding that gun laws be strengthened.

But it's unclear how Congress will act and also how the Supreme Court will react to any legislation or regulations from the federal or state governments.

Since issuing landmark opinions in 2008 guaranteeing an individual right to have a gun, and a follow on opinion in 2010, the Supreme Court has largely dodged petitions testing the scope of the holding. That prompted Justice Clarence Thomas to lash out in 2018, complaining that the lower courts were treating the Second Amendment right "cavalierly."

But next term, the court will take up a Second Amendment case concerning a New York City ordinance that limits where licensed individuals can take their guns. The court's move, so soon after the retirement of Justice Anthony Kennedy, prompted court watchers to speculate that with the addition of Justice Brett Kavanaugh, the court might be ready to take a more expansive view of the Second Amendment.

In District of Columbia v. Heller, Justice Antonin Scalia wrote for a 5-4 court that Washington, DC's ban on handgun possession in the home "violates the Second Amendment." Supporters of the landmark opinion believed that gun restrictions across the country would be cut back in the aftermath.

But many lower courts seized upon the words in the opinion where Scalia wrote, "Like most rights, the right secured by the Second Amendment is not unlimited," to uphold restrictions.

Until his death last month, retired Justice John Paul Stevens -- who wrote a stinging dissent in 2008 -- criticized Heller, writing in his book "The Making of a Justice," that it was "unquestionably the most clearly incorrect decision that the Court announced during my tenure on the bench."

Stevens said that he circulated a draft dissent five weeks early, hoping to influence his colleagues. He noted that in the end, Scalia did "not change the result" but Stevens thought his dissent may have contributed to Kennedy "insisting on some important changes before signing on to the Court's opinion."

In the opinion, Scalia ultimately wrote, "Nothing in our opinion should be taken to cast doubt on longstanding prohibitions on the possession of firearms by felons and the mentally ill, or laws forbidding the carrying of firearms in sensitive places such as schools and government buildings, or laws imposing conditions and qualifications on the commercial sale of arms."

Now Kennedy is no longer on the bench, having been replaced by Kavanaugh, who received the endorsement of the National Rifle Association last year.

"President Trump has made another outstanding choice in nominating Brett Kavanaugh for the U.S. Supreme Court," said then- NRA-ILA Executive Director Chris Cox. "He has an impressive record that demonstrates his strong support for the Second Amendment."

Cox may have been referring to a dissent Kavanaugh penned in 2011 as a lower court judge. He wrote that DC's ban on semi-automatic rifles and gun registration requirement are "unconstitutional and may not be enforced."

Kavanaugh testified at his Senate confirmation hearing last year that he based his opinion on the Heller decision. "This is all about precedent for me," he said and noted that Scalia had said that dangerous and unusual weapons could be prohibited. Kavanaugh said it's "very important to recognize under the Heller decision that machine guns can be prohibited" but he continued that the ban at issue "seemed to fit common use and not being a dangerous and unusual weapon."

Some court-watchers question whether one reason that the Supreme Court has been slow to take on additional cases after Heller was because it was unclear how Kennedy would vote. Others dismiss the notion, suggesting that after Heller, the court may have wanted the issue to percolate more in the lower courts. They contend that the court may have moved to take up the new case because the law at issue was an outlier.

The case the Supreme Court is set to hear next term concerns a provision of a New York City gun law that regulates where licensed handgun owners can take their firearms. The law blocks licensed individuals from removing a handgun from the address listed on the license except to travel to nearby authorized small arms ranges or shooting clubs.

The challenge comes from the New York State Rifle & Pistol Association. In court papers, their lawyers argued that a New Yorker cannot transport his handgun to his "second home for the core constitutional purpose of self-defense or to an upstate county to participate in a shooting competition, or even across the bridge to a neighboring city for target practice."

The Trump administration has urged the Supreme Court to overturn the law.

"New York City's transport ban infringes the right to keep and bear arms guaranteed by the 2nd and 14th Amendments," Solicitor General Noel Francisco argued in a friend of the court brief earlier this year.

Since the Supreme Court granted the case, however, the law was changed and lawyers for New York told the justices in briefs they thought the case should be considered moot.

The city amended the regulation to allow licensed individuals to transport their handguns to additional locations including second homes and shooting ranges outside of city limits. The lawyers told the justices that the case should be dismissed because the new statute "gives petitioners everything they have sought in this lawsuit."

The court has yet to act on the request.

But even if it dismisses the New York case there are other petitions waiting in the wings.

Mance v. Barr, for instance, concerns out-of-state handgun purchases. Pena v. Horn concerns California's Unsafe Handgun Act . Those cases and others have been distributed for conference but not acted upon.

Last term the justices denied a request to put the Trump administration's rule banning bump stocks on hold while legal challenges play out. A bump stock is an attachment that essentially allows shooters to fire semi-automatic rifles continuously with one pull of the trigger. In his comments Monday, Trump praised his action on bump stocks.

The justices are also considering a case that stems from the Sandy Hook shooting, although it does not directly target the Second Amendment.

Last week, the Remington Arms Company asked the court to take up a lawsuit next term brought by a survivor and families of nine other victims of the Sandy Hook Elementary School tragedy in 2012 who argue the gun manufacturer should be held partly responsible for the mass shooting.

A 2005 federal law protects many gun manufacturers from wrongful death lawsuits brought by grieving family members. But the Sandy Hook plaintiffs are seeking a way around the law by targeting the company's marketing strategy. While the state Supreme Court ruled the case could move forward, it agreed to put its ruling on hold pending appeal.

War 60 days ago
As a veteran of the us military I swore to support and defend the constitution against all enemies foreign and domestic. I could not ever take up arms against a innocent or unarmed civillian or any other non life threatening attacker. I love my country and all the variety of persons who stand for our flag. I offer no assistance to a cause who would aim to affect the daily lives of my fellow citizens. But do not misunderstand my oath as I swore it. The government is closely coming to a point of which most of my fellow countrymen also see our representation is more interested in serving their own interests and financial prosperity than they are the prosperity of the citizens they are supposed to serve. We are not a sleep, we will not allow you to continue to violate the laws they hold is accountable to. Many members of our elected official offices have given in to crimes and those criminal will not survive a revolution. If any man feels the American patriot is not a threat to them as they are safe on their office and their crimes will go unpunished let me give notice you are not. We, as a legal citizen and patriots following the rule of law which is the us constitution and in that which supersedes your unjust laws will not stand by and watch you feast on our rights. When your greed and hidden agenda is exposed the gallows will be made ready for you as the constitution only provides for one sentence in reference to your treasons and that is death. Make no mistake the American people will not be disarmed nor dismayed from keeping our sworn oaths. So help us God.
Like Reply Delete