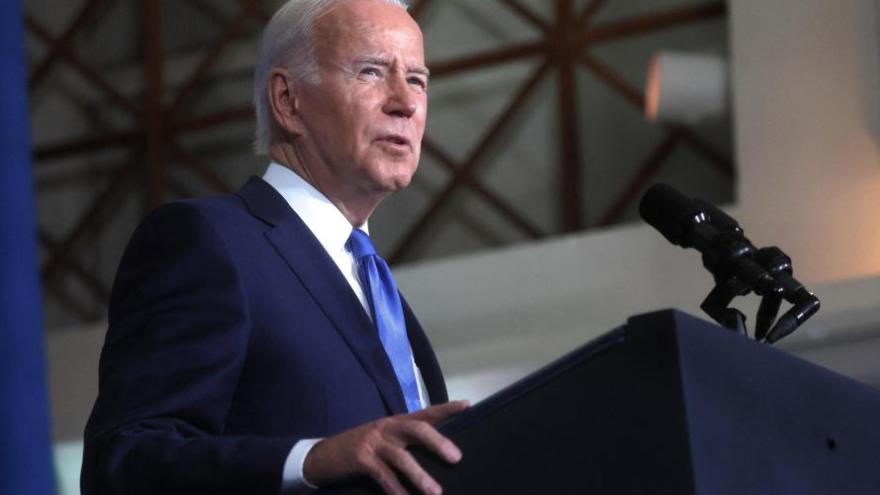 President Joe Biden speaks during a Democratic National Committee event at the Columbus Club in Washington, on November 2.

(CNN) -- As White House officials prepared for the last jobs report before the midterm elections set to be released Friday morning, the last thing they wanted to see is a blowout hiring number.

It's the political paradox that loomed over the last major piece of economic data before Election Day -- one that comes at a moment that finds Democrats desperately trying to make up ground on the economy.

The US economy added 261,000 jobs in October -- more than the 200,000 jobs economists had predicted but still landing in the upper part of the range that White House officials were hoping to see heading into Friday, which was about 150,000-300,000.

It was a "Goldilocks" outcome for the White House -- a number that's not too low, but not too high.

President Joe Biden heralded Friday's jobs report, saying in a statement that the new data "shows that our jobs recovery remains strong." He dismissed criticism from Republicans that the economy is headed toward a recession as he continues to receive low marks from voters on his handling of inflation.

"One thing is clear: While comments by Republican leadership sure seem to indicate they are rooting for a recession, the US economy continues to grow and add jobs even as gas prices continue to come down," Biden said in a statement, reiterating that inflation remains "our top economic challenge."

The president also discussed the jobs data during remarks at Viasat in southern California, an American technology company that will benefit from passage of the CHIPS and Science Act.

"Look, I came here because it's an example, one of the bright spots we're seeing across the country, where America is reasserting itself -- as simple as that. Ten million new jobs in 20 months! This morning, I learned that we added another 261,000 jobs this month," Biden said, referring to the recently released numbers as a "Goldilocks report." "Look, unemployment, it went up two tenths of a percent, so 3.7%, among the lowest in 50 years."

It's a far cry from just one year ago, when the US economy was adding jobs each month at an eye-popping clip: More 650,000 jobs in October and November, close to 600,000 in December, followed two months later by a whopping 714,000 new jobs in February.

Biden and his economic team have known for months that a cooling of the economy is a necessity to crack the pervasive price increases that have handed a significant advantage to Republicans on the issue which voters consistently cite as most important.

Biden and his top advisers have taken pains since the summer to underscore their rationale for the transition from major job gains to an economic picture defined by "steady and stable" growth.

It's a message intended to temper expectations after more than a year defined by the rapid pace of hiring, but also a goal viewed by officials as a necessity in order to protect many of the gains they regularly tout.

At its heart is Biden's most significant economic success: A dramatic jobs recovery from the pandemic-driven economic crisis he walked into on his first day in office. More than 10 million jobs have been added since Biden's inauguration and the unemployment ticked up from 3.5% to 3.7% on Friday.

The combination of continued job gains and a return to quarterly growth sit at the center of the Biden's contention that, despite the dour national mood, the US economy is not in or on the precipice of a recession.

The tight labor market, however, has exacerbated the soaring price increases that have imperiled Democrats' hold on their majorities in the House and Senate. That, in turn, has driven the Federal Reserve to trigger four consecutive jumbo rate increases, including the most recent three-quarters-of-a-point move this week.

Fed Chairman Jerome Powell, in his news conference after the policy announcement, pointed to a labor market that "is just very, very strong" as a central reason the rapid rate increases haven't tangibly dented soaring prices.

"So it may take time. It may take resolve. It may take patience. It's likely to get inflation down," Powell said of the effect of the Fed's actions. "I think you see from our forecasts and others that it will take some time for inflation to come down."

Biden has made clear publicly -- and to his team privately -- that the Fed is an independent entity and won't face any political pushback from his administration as it attempts to intentionally cool down the US economy.

But White House officials are also keenly aware that the stated goal of a "soft landing" where the central bank manages to significantly tighten economic conditions in order to drive inflation down, but not enough to tip the economy into a painful recession, is a difficult needle to thread.

They do see indications that it's a possible outcome, however.

"I believe there's a path to accomplishing that while maintaining a very healthy labor market," Treasury Secretary Janet Yellen told CNN in an interview. "And I believe we're on that path."

But that path includes officials rooting for more modest jobs gains, or clear signs of the "steady and stable" environment that would create more room for the Fed's difficult task.