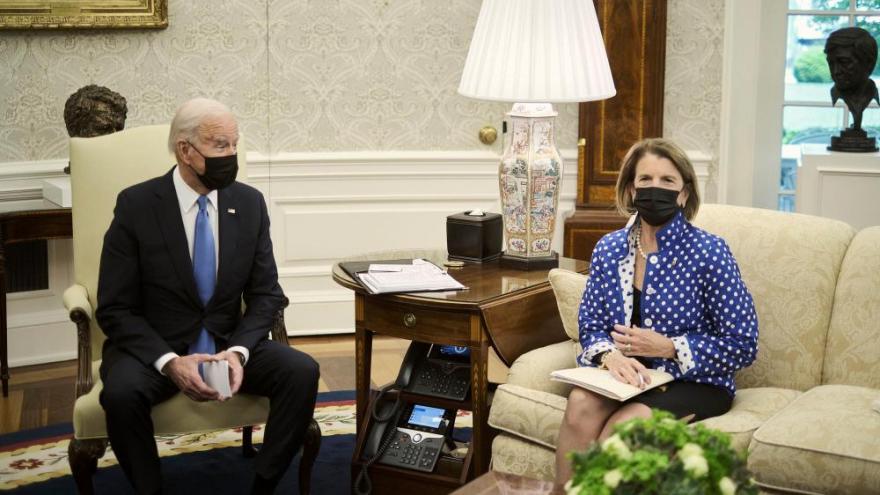 President Joe Biden makes a statement to the press as Sen. Shelley Capito listens during a meeting with a group of republican senators to discuss the administration's infrastructure plan in the Oval Office at the White House on May 13.

(CNN) -- Infrastructure negotiations between President Joe Biden and a Senate GOP group led by Sen. Shelley Moore Capito broke down on Tuesday, and now the White House is shifting its focus toward an impending proposal from a bipartisan Senate group led by Democratic Sen. Joe Manchin.

And late Tuesday, a bipartisan group of 58 House members released a $1.25 trillion proposal -- including $761.8 billion in new spending -- in an attempt to break the logjam in Congress.

"While I appreciate President Biden's willingness to devote so much time and effort to these negotiations, he ultimately chose not to accept the very robust and targeted infrastructure package, and instead, end our discussions," Capito said in a statement following the call. "However, this does not mean bipartisanship isn't feasible."

"After negotiating in good faith and making significant progress to move closer to what the president wanted, I am disappointed by his decision," she added.

Later Tuesday afternoon, Capito told Fox News she was "extremely disappointed because we offered the President basically what he asked us to do the first time we met with him."

Capito argued that "miscommunication" began when Biden's staff pulled back from the Republicans' red line.

"There was subsequent conversations with the staff where it was made clear this has to be all new spending, and that was a great departure from where we had been with the President himself," she said.

White House press secretary Jen Psaki said in a statement that Biden had informed Capito "that the latest offer from her group did not, in his view, meet the essential needs of our country to restore our roads and bridges, prepare us for our clean energy future, and create jobs."

An administration official said the Biden-Capito call was respectful, but made clear they were not going to reach an agreement.

"He offered his gratitude to her for her efforts and good faith conversations, but expressed his disappointment that, while he was willing to reduce his plan by more than $1 trillion, the Republican group had increased their proposed new investments by only $150 billion," Psaki said in the statement.

Psaki said the President had "urged them to continue their work with other Democrats and Republicans to develop a bipartisan proposal that he hopes will be more responsive to the country's pressing infrastructure needs."

Capito had said earlier Tuesday that she's not involved with the group.

"That really is separate and apart from what I've been dealing with," she said. "I'm sticking with what I've got."

When asked if she felt undermined by the group, Capito told Fox News that it was "disappointing," adding, "If there's something else out there that looks better, sometimes that's a distraction."

She said she believes Democrats will turn to budget reconciliation next, a path that wouldn't require them to overcome a filibuster and could be passed with a simple majority.

However, Biden and his team are hoping Capito will engage in the bipartisan group's infrastructure efforts, according to an administration official.

Biden's team will ramp up engagement with the Manchin-led group over the course of this week, including plans for the President to engage directly while he's in Europe, according to the White House. The Cabinet secretaries who make up Biden's "Jobs Cabinet" will play a leading role in the discussions, along with White House aides Steve Ricchetti, Louisa Terrell and Brian Deese, according to the White House statement. Chief of staff Ron Klain is also expected to shepherd the negotiations from Washington while Biden is in Europe.

For its part, the House Problem Solvers Caucus says it would spend the infrastructure money over eight years, and its $1.25 trillion plan marks a rare bipartisan agreement over the scope of such a package. But the group does not detail how it would be paid for, saying it's something they are working on with a bipartisan group of Senate negotiators including Sinema, Cassidy and Manchin.

The President leaves the talks with Capito maintaining the view that they occurred in good faith and takes from them not only a better understanding of her perspective but also a positive opinion of her generally, according to one administration source.

White House officials viewed the Capito negotiations as simply dead in the water -- with Biden willing to make far more concessions and look for creative ways to meet GOP demands, specifically on the 2017 tax law, the official said. The administration's view was that the effort simply wasn't reciprocated.

Biden and Capito had been in touch frequently since the President proposed a comprehensive infrastructure plan. But talks dragged on past the White House's Memorial Day deadline without a significant breakthrough between the two sides, leading to pressure from some Democrats to move on from bipartisan talks.

Biden invited Capito to the White House last week and offered to bring his price tag down to $1 trillion in new spending. On Friday, he rejected a new counteroffer made by Capito on behalf of Senate Republicans that included a $50 billion increase in spending. Biden told Capito that the new offer did not meet his policy goals.

Two administration sources indicated that in the end, Biden's request that the GOP group commit to significantly increasing funding simply wasn't something they could do. One of the sources relayed that Biden never entertained the idea of repurposing Covid relief funds to finance the proposal and the other source said he did not feel like he got a sufficient counterproposal that didn't involve using those funds.

The White House statement said Biden also had spoken with House Speaker Nancy Pelosi and Senate Majority Leader Chuck Schumer regarding the American Jobs Plan and the budget process "so that legislation to advance the President's economic priorities and tax reform plans could move to the Senate floor in July."

Capito had repeatedly signaled this week that she wasn't sure where infrastructure negotiations were headed at this point.

And hours before he was scheduled to talk with Capito, Biden appeared to suggest that the door is closing on reaching any type of bipartisan agreement.

"I'm working hard to find common ground with Republicans when it comes to the American Jobs Plan, but I refuse to raise taxes on Americans making under $400,000 a year to pay for it. It's long past time the wealthy and corporations pay their fair share," Biden tweeted.

House Democrats on Wednesday will begin preparing an infrastructure bill for passage with or without Republican support.

This story has been updated with additional developments on Tuesday.